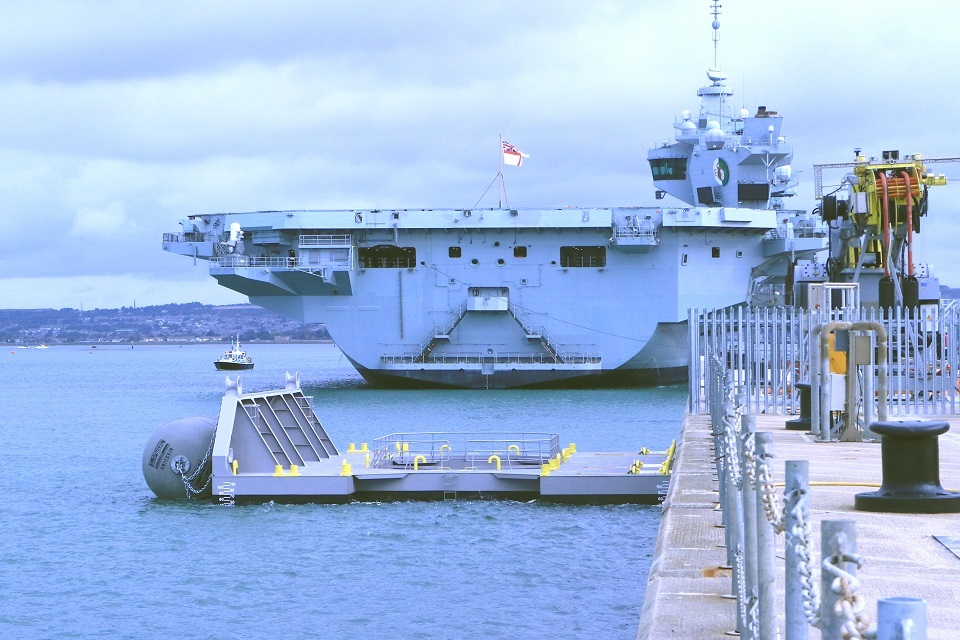 The Defence Infrastructure Organisation (DIO) is working with its contractor Volker Stevin to deliver crucial infrastructure worth £30-million to ensure the base’s second operational berth is ready in time for the carrier, which is due to arrive by the end of this year.

One of the final pieces of the project was the installation of 2 Fendered Spacer Units (FSU). The FSUs are identical to those which were installed on the Princess Royal Jetty for HMS Queen Elizabeth, however this time they have been constructed by Portsmouth company ML (UK) Ltd, rather than being brought in from overseas.

The structures, which measure 17.6 metres by 18.7 metres, slot into the jetty and move up and down with the tide to prevent the ship’s overhanging flight deck from colliding with the jetty.

The FSUs took 11 months to build and have now been put into position at Victory Jetty. They were craned from ML (UK) Ltd’s yard into the water at Portsmouth Harbour, final trim checks were then carried out and the ballast weights moved to ensure the units were floating level. Finally, the units were towed to their new locations on the jetty face.

It’s fantastic to see the finishing touches being put to this important project which has made improvements to the existing Victory and Sheer jetties, so they can support the 65,000-tonne new carrier. We are pleased to be working with Volker Stevin and ML(UK) and to support a local company through the supply chain.

This has been a challenging but rewarding project and a once-in-a-lifetime opportunity to deliver infrastructure for such a crucial Naval asset. We are proud to be playing our part to support future Naval capability.

As a local Small to Medium Enterprise, which has worked for many years within the naval base, we are delighted to have been selected to manufacture and deliver the two FSUs for the second aircraft carrier berthing facilities. We have achieved a very high-quality product which has been delivered safely and in a timely fashion. The whole team is very proud to have worked on this local project.

This project has been fantastic to work on and I’m proud VolkerStevin has played a central role in the delivery of this nationally significant and challenging infrastructure project.

Working with local business, ML (UK) has been key to the successful installation of the FSUs and the end result is a real testament to the value of the local supply chain.

As well as providing the FSUs, the project has involved refurbishing Victory Jetty to extend its life for more than 50 years, the construction of a new mooring dolphin, the installation a Galvanic Cathodic Protection system and the provision of a second high voltage electrical system which feeds the carrier through a new hydraulic boom.