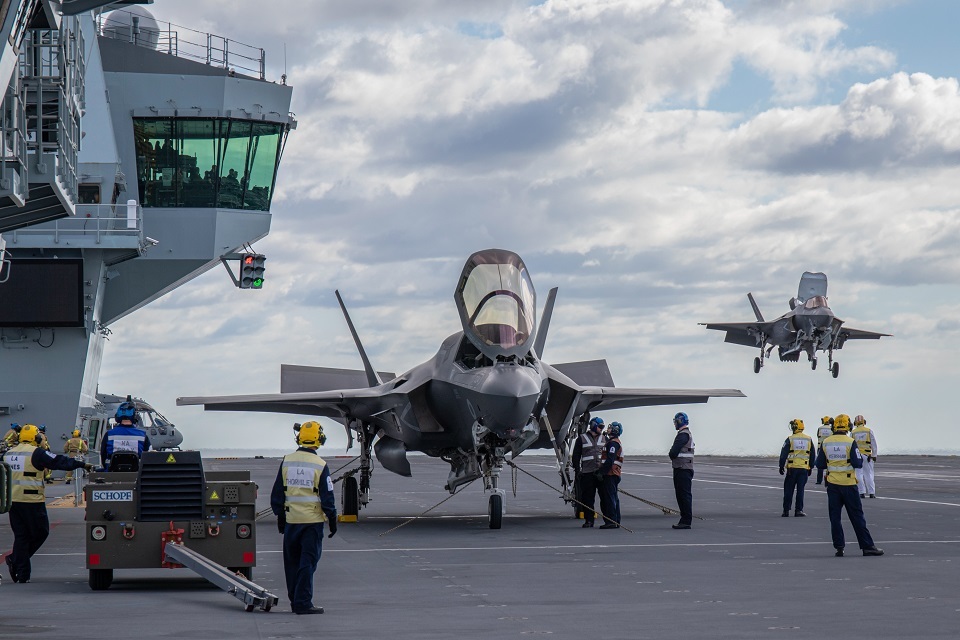 Flown by Royal Navy and Royal Air Force pilots, the Lightning jets are embarking in the 65,000 tonne carrier to conduct operational trials off the East Coast of the USA.

This follows successful developmental trials last year with US Lightning jets, where forces conducted 500 take offs and landings over their 11-week period at sea.

These trials are aimed at ‘end-to-end’ testing of the aircraft and personnel to ensure the aircraft are compatible with the carrier. The tests involve mission planning, arming the aircraft using the ship’s Highly Automated Weapon Handling System, flying missions and debriefing on completion.

During this time, the aircraft carrier will be escorted by Type 45 destroyer HMS Dragon, submarine hunter HMS Northumberland, tanker RFA Tideforce and Merlins from 814, 820 and 845 Naval Air Squadrons, Wildcats from 815 squadron and Royal Marines from Lima Company, 42 Commando.

This is another step towards the UK’s carrier strike capability becoming fully operational.

The bringing together of the UK Lightnings on the first in class HMS Queen Elizabeth paves the way for the world’s most up to date, fully integrated carrier force.

The Lightning aircraft operates with a cutting-edge design. It is the first jet to combine radar evading stealth technology with supersonic speed, as well as the ability to land vertically. Given its ability to conduct missions both from land and sea, the jets act as a formidable spine to the ‘carrier strike’ capability. The UK currently owns 18 aircraft, with an additional order placed for 30 jets.

This is the first time I have landed onboard an aircraft carrier – for it to be HMS Queen Elizabeth, and in an aircraft as amazing as a UK Lightning, is quite something.

This is a proud moment not only for me, but the wider team that has brought us to this milestone for maritime aviation and UK Defence.

The trials will be led by the joint Royal Navy – Royal Air Force 17 Test and Evaluation Squadron from the Air Warfare Centre. The Squadron will be operating alongside personnel and aircraft from the UK Lightning Force, based out of RAF Marham.

Embarking UK Lightning jets in HMS Queen Elizabeth for the very first time is a major milestone for Royal Navy and Royal Air Force aviation and for our development of the 5th generation Carrier Strike Group capability.

Once again, the support from our US Navy and US Marine Corps colleagues in the United States has been incredible and undoubtedly helped bring us to this moment: making maritime aviation history.

Bringing our own Lightnings onboard HMS Queen Elizabeth for the first time gives us the opportunity to conduct critical operational testing. With the Royal Navy and Royal Air Force operating so closely together, these are incredibly exciting times for embarked Combat Air.

The UK will declare Initial Operating Capability for Carrier Strike by the end of 2020. The first operational deployment for HMS Queen Elizabeth 617 Squadron and a squadron of US Marine Corps Lightning jets is due to take place in 2021.

Getting to this point of embarking UK Lightning jets into our British-built carrier has been a significant joint undertaking by industry and military – both ours, and those from the United States.

We will take the jets from the successful developmental phase we achieved last year through to a more operational footing, so we are confident that the jets, the carrier and our destroyers and frigates will function seamlessly together.

International Affairs Change of the UK Ambassador to ASEAN in Jakarta: J…