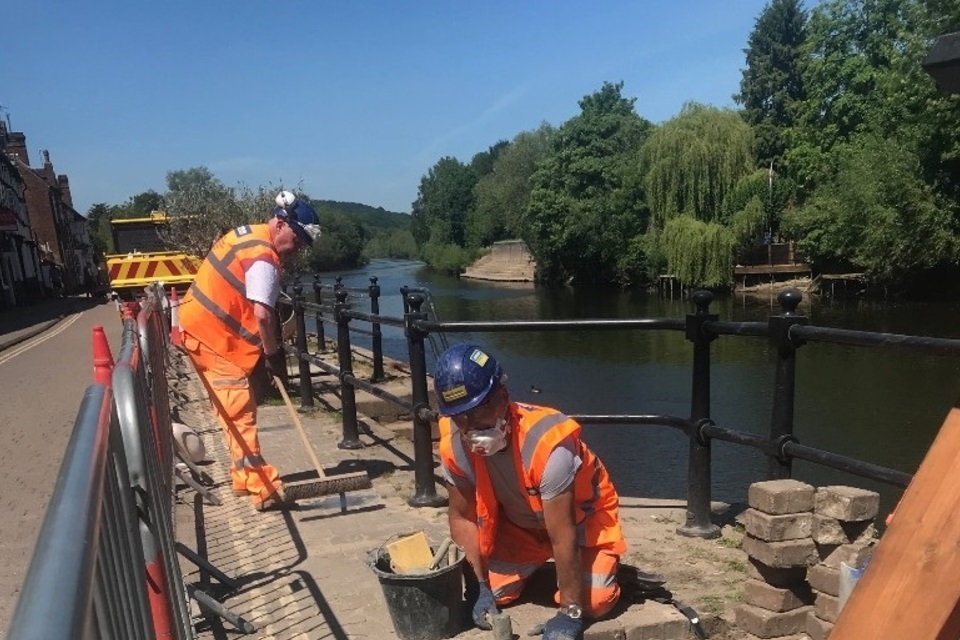 The 3 named storms in February – Storm Ciara, Dennis and Jorge – caused extensive disruption and severe impacts with many areas flooded, including parts of the Midlands.

With ground already sodden from last autumn’s heavy rains and floods, the area quickly became flooded, with many rivers, including the Severn, reaching some of the highest levels ever seen or reaching levels not seen since 2000.

Sadly homes and businesses were flooded and Environment Agency flood defences prevented the flooding being much worse by protecting 14,500 properties from flooding in the devastating February floods.

The work, which will improve the standard of flood protection to 270 properties, includes resetting the block pavers that sit under the flood barriers to reduce seepage during a flood, following damage caused during the October and February floods. It also includes the resealing of the elements of the barrier that remain in place and the recladding of the floodwall at Gardners Meadow.

All work is being carried out whilst following government guidelines on social distancing and ensuring contractors are also following the correct procedures.

During coronavirus we are continuing to maintain and operate our flood and coastal defences to ensure they protect people and property from flooding. We carry out regular checks, tests and repairs that ensure our defences can continue to reduce flood risk to homes and businesses.

Repairing our flood defence assets in Bewdley will make a big difference to reducing flood risk to more than 270 properties.

The sheer volume of water in the system in the February floods put pressure on many of our flood defences. Since then, where possible, and, whilst adhering to government guidance due to the current pandemic, our teams have been inspecting defences to check for any damage and the need for any repairs, so that we can ensure they are ready for any future floods. We have also used drone footage to help with the process.

This work is going well and the repairs we are carrying out in Bewdley will extend the life of the Severnside flood defences.

The Severnside Scheme protects properties on the town side of the river, and consists of concrete flood walls, demountable barriers and two pumping stations. The work is expected to be complete by the end of August.

Environment Agency teams work around the clock to help protect people from flooding, but flood risk can never be eliminated completely, everyone still has a responsibility to take steps to protect themselves.

Check whether you’re at risk of flooding, and sign up to receive our free flood warnings, or call 0345 988 1188. By registering, you can choose how you’d prefer to be reached – by text, phone call to a mobile or landline, or even email – giving you vital notice to prepare if flooding is expected.

We encourage all those who may be at risk of flooding to take steps to protect themselves by:

Environment Geospatial Data Strategy to unlock the power of lo…
0
✖