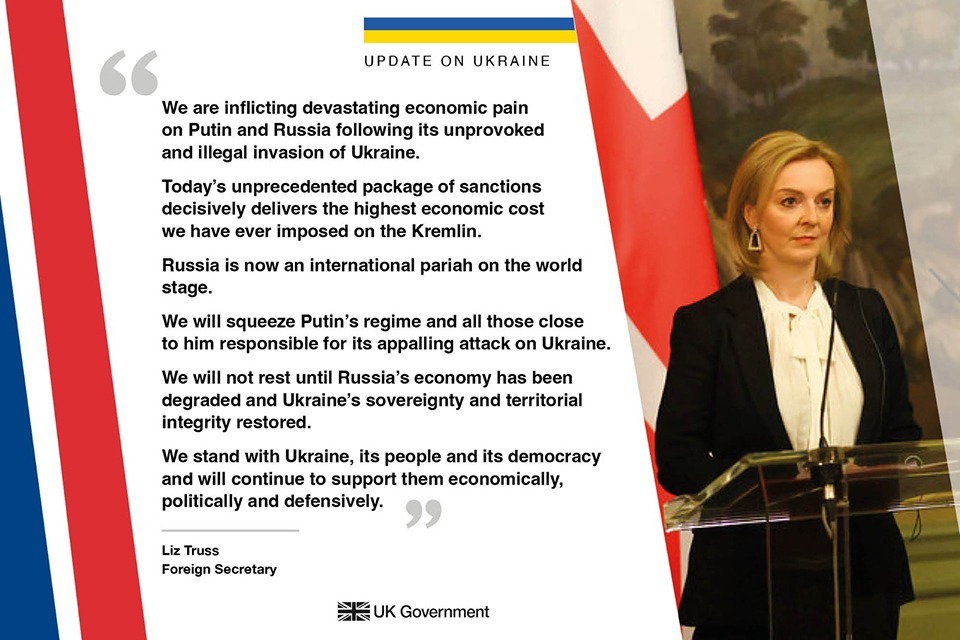 Following its illegal invasion of Ukraine the sanctions will ban Russia’s economically vital industries and companies from raising finance on the UK’s money markets – the most important financial centre in Europe.

The sanctions will also have an immediate impact on Russia’s wealthy elite and Putin’s inner circle including his former son-in-law.

Alongside the financial measures, we will substantially strengthen trade restrictions – including our toughest export controls against Russia – hitting its electronics, telecoms and aerospace companies. And Russia’s flagship airline Aeroflot will be banned from the UK’s airspace.

Under new banking restrictions all Russians will be banned from having significant savings in UK bank accounts.

The UK’s sanctions against 120 businesses and oligarchs are part of a concerted strike against the Putin regime carefully co-ordinated with our international allies including the US, the EU, and other G7 partners.

The UK will also issue decisive sanctions against Belarus for its part in the wholly unjustified attack on Ukraine.

Among today’s targets are:

We are inflicting devastating economic pain on Putin and Russia following its unprovoked and illegal invasion of Ukraine.

Today’s unprecedented package of sanctions decisively delivers the highest economic cost we have ever imposed on the Kremlin.

Russia is now an international pariah on the world stage.

We will squeeze Putin’s regime and all those close to him responsible for its appalling attack on Ukraine.

We will not rest until Russia’s economy has been degraded and Ukraine’s sovereignty and territorial integrity restored.

We stand with Ukraine, its people and its democracy and will continue to support them economically, politically and defensively.

These sanctions are in addition to the sanctions imposed on banks, high-net worth individuals, and sanctions soon implemented on 571 members of the Duma and Federation council, as well as territorial sanctions and restrictions on sovereign debt announced on Tuesday.

The Foreign Secretary will shortly embark on a round of shuttle diplomacy in the US and Europe to galvanise a swift, determined and decisive international response to Russia’s invasion of Ukraine.

The Government will bring forward legislation shortly to enable these punishing sanctions on Putin and his regime to be implemented.

Acting in coordination our allies, the combined effect of these measures will deliver a devastating blow to Russia’s economy and military for years to come.

We will introduce new financial measures to:

We will substantially strengthen our trade restrictions to:

Aligned with the US, EU and other partners, these trade sanctions will constrain the development of Russian’s military-industrial and technological development for years to come.

We are immediately designating more Russian individuals and entities, including:

These individuals will be unable to travel to the UK and any UK-based assets will be frozen.

New sanctions measures will be captured in forthcoming secondary legislation. These will cover:

The 5 major defence companies being sanctioned today are: