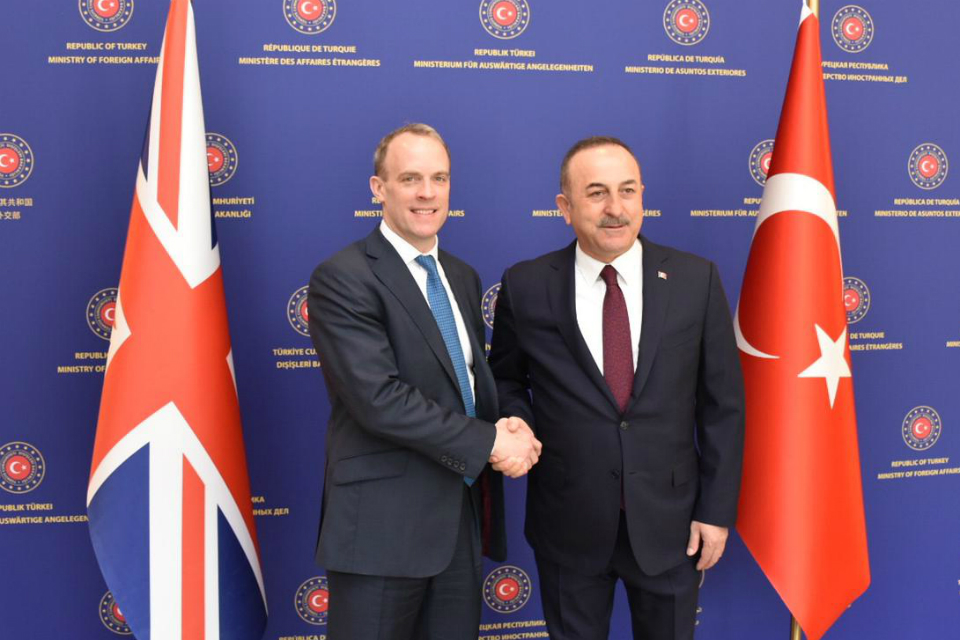 Thank you. I’m pleased to be making my first official visit to Turkey as Foreign Secretary. I’m very grateful to my host, Foreign Minister Mevlüt Çavuşoğlu. Thank you Mevlüt for your hospitality.

Like many others around the world, I was absolutely appalled to hear of the tragic deaths of more than 30 Turkish soldiers as a result of brutal regime attacks in Idlib. Once again, I’d like to express my deepest condolences on behalf of the UK government to the Turkish government and indeed to the Turkish people.

For decades, Turkey has been a staunch ally in NATO and one of its largest contributors of military personnel.

We support Turkey’s efforts to re-establish the ceasefire agreed in 2018 and to protect those innocent civilians fleeing the regime’s monstrous assault. We have also been very clear in our condemnation of the regime’s actions in Idlib.

We are gravely concerned by the significant escalation in military action by Russia and the Syrian regime in the North West. We have condemned these actions as flagrant violations of international law and indeed basic human decency.

The UK has raised this issue in multiple multilateral fora. On 28 February, we called for an emergency UN Security Council session in New York. On that same day we, at the NATO North Atlantic Council, expressed our support for Turkey’s efforts to re-establish a ceasefire in Idlib.

Our position remains clear. Only a political settlement in line with UN Security Council resolution 2254 can deliver lasting peace in Syria. It is the Syrian regime that continues to stall the political process to end this war, as the first and foremost responsibility for the situation we find ourselves in, and indeed the cost it is inflicting on the Syrian people.

I would like to pay tribute to Turkey’s commendable response to the humanitarian crisis in Syria. For years, Turkey has helped carry the enormous burden of supporting millions of Syrian refugees, and indeed other displaced persons. Often you have felt ignored.

And Turkey has also played an important role in trying to bring about a political solution through the Sochi process.

The UK remains committed to providing support for both Turkish host communities and Syrian refugees. We know both groups are under sustained pressures.

And with that in mind, it is crucial that unhindered humanitarian access is maintained. Aid must be able to reach those in desperate need. And aid workers must be able to help the most vulnerable without fear of attack.

The UK has played a leading role in supporting the implementation of the 2016 EU-Turkey deal on migration and will continue to do so.

Once again, the root cause of this is the reckless and brutal nature of the Syrian regime and the Russian offensive in Idlib. The Syria conflict has been one of the most destructive in recent human history and we want the war to end as quickly as possible.

In particular, we want to end the humanitarian suffering and the UK is also a major donor to the Syria Crisis. To date, we have committed £3.1 billion in response to the Syria Crisis, our largest ever response to a single humanitarian crisis. Since 2019, our commitment to projects inside Syria amount to over £220 million. Including emergency food, clean water, tents, medical kits, education and maternal healthcare.

And today, in response to the ongoing situation in Idlib and to help those most in need, we’re boosting our UK aid commitment by £89 million to organisations delivering humanitarian aid inside Syria, including around Idlib.

I hope my visit today demonstrates the importance we attach to our relationship with Turkey. We do appreciate that Turkey sits on the frontline of some of the most difficult and serious challenges we face in the region.

We share common objectives in ensuring both our countries and citizens remain safe and I think particularly for the UK, as a NATO ally, G20 member, founding member of the Council of Europe, Turkey is an absolutely indispensable partner.

We work closely together for regional stability and security, protecting our nationals and, as the UK leaves the EU, improving markets for increased investments.

Our counter terrorism cooperation remains strong. The UK stands with Turkey in the fight against terrorism, and recognises the serious threat posed by the PKK. Just last week, Parliament extended the proscription of the UK to acknowledge the HPG and TAK as aliases of the PKK.

Naturally, as close friends, there are issues that we may not agree on. But our close partnership allows us to have frank discussions on issues, such as human rights and the rule of law, which are important to the functioning of any healthy democracy.

Our intention is to continue to work even closer together on defence, security and trade cooperation. The UK’s exit from the EU opens up many opportunities for that to happen.

One of our priorities is to agree a Free Trade Agreement with Turkey during 2020. I think that will be a major contribution to a strong Turkey-UK economic relationship and help boost our trading partnership which is already worth around £18 billion per year.

So, finally, I’m here in Turkey to show British solidarity with you, the Turkish people, because when you need our support we will always be there for you. And because our friendship matters now more than ever.

Thank you again Mevlüt for your warm welcome and I look forward to our continued friendship.

Law Call for evidence: Collaborative use of live facia…
0
✖