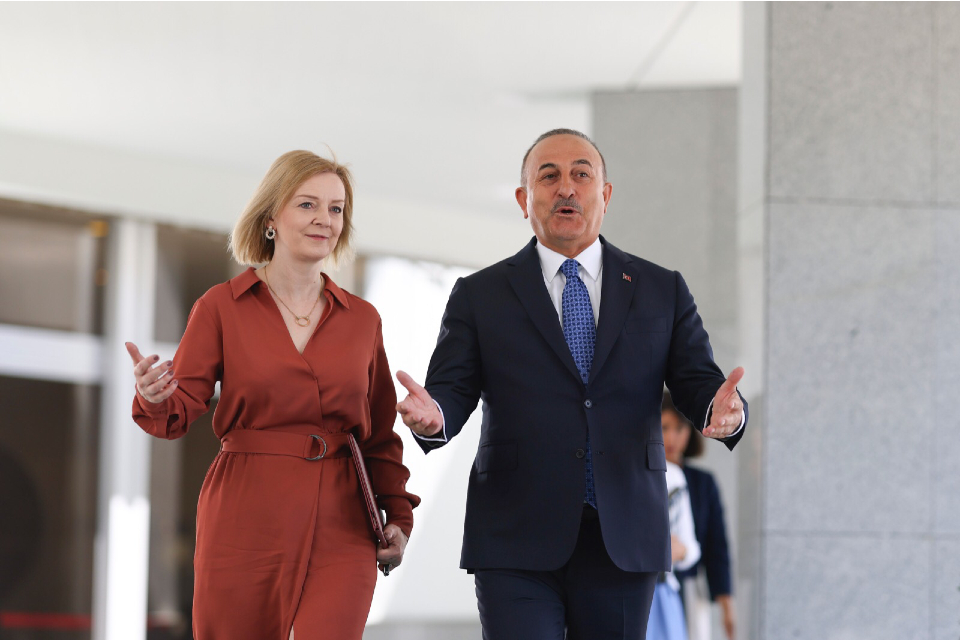 Well thank you very much Mevlüt for your welcome. It’s great to be here in Ankara.

At a time when security, sovereignty and self-determination are under threat, the United Kingdom’s longstanding alliance with Turkey is more important than ever.

We are the 2 largest European contributors to NATO and we are deepening our economic relationship.

We signed a trade deal in December 2020. Which is soon to be upgraded to include areas like agriculture and services.

We are also tackling major challenges like Terrorism. And developing our security relationship.

European security is threatened by the appalling war Russia is prosecuting in Ukraine. And the United Kingdom and Turkey are working closely together.

In particular we are working to get the grain out of Ukraine. Putin is weaponising hunger, he is using food security as a callous tool of war. He has blocked Ukrainian ports and is stopping 20 million tons of grain being exported across the globe, holding the world to ransom.

I’m here in Turkey to discuss the plan to get the grain out. Supported by the United Nations. We are clear that commercial vessels need to have a safe passage to be able to leave Ukrainian ports.

And the Ukrainian ports should be protected from Russian attacks. We support the UN talks. But Russia cannot be allowed to delay and prevaricate. It’s urgent that action is taken within the next month ahead of the new harvest.

And we are determined to work with our allies to deliver this.

We are also working with Turkey as fellow NATO members to prepare for the NATO summit which is taking place next week.

The alliance’s open door policy must remain sacrosanct. The UK is very supportive of Finland and Sweden joining NATO. And we believe both joining will strengthen our collective defence and security.

This is a moment for strength, for commitment and unity.

The United Kingdom and Turkey are working closely together to mitigate the consequences of Russia’s war against Ukraine.

This has to start with getting Ukraine’s grain out. We cannot and will not rest until Ukraine prevails with its sovereignty restored.

Thank you again Mevlüt for inviting me to Ankara. We’ve had a very a productive discussion today. And I believe the relationship between Turkey and the United Kingdom will go from strength to strength.

International Affairs Calling for young peoples’ voices to be harn…