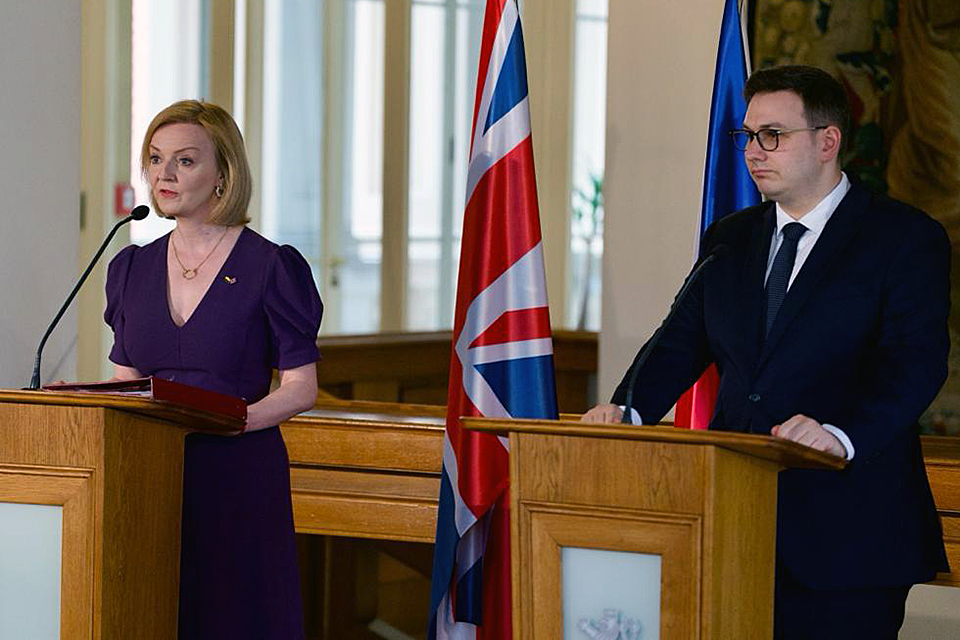 Well, thank you very much. It’s very good to be here in Prague with my friend Jan.

We are very close allies and together we have backed Ukraine against the appalling war perpetrated by Vladimir Putin.

The Czech Republic knows what occupation is like, first with the Nazis and then with the Soviets. And earlier today, I was pleased to join the commemoration of Operation Anthropoid, celebrating the bravery of heroic Czech resistance fighters who were trained by the British in the Second World War.

And I saw from the Czech Republic public the strength of opinion in the face of adversity and also the outrage of Vladimir Putin’s appalling war in Ukraine. And it very much reflected the way that we have seen public opinion in Britain, absolutely horrified by what Putin is doing in Ukraine.

Here in the Czech Republic, we saw the rebirth of democracy and freedom in the 1990s.

And I know that that is the spirit that Jan and the Czech government represents today. More than any other government and any other country, the Czech Republic, knows the dangers of appeasement and compromise in the face of aggression.

And that’s why we’ve agreed that we need to keep up the pressure on sanctions both through the G7 and through the EU. And we need to make sure that the brave Ukrainian people have the weapons they need to defend themselves.

Together, we are training Ukrainian fighters through the British Military Advisory Training Team and in the Czech Republic we’ve also discussed the importance of rebuilding Ukraine and having a Marshall Plan supported by the free world to rebuild this vital country.

Together, we’re fighting Russian and Chinese disinformation, and I want to commend the Czech Republic for the strong stance that they have taken against Chinese economic coercion.

We must ensure that Taiwan is also able to defend itself.

We both agree that NATO needs to step up. We need to do more to protect the edges of Europe, including Moldova and the Balkans, which I visited earlier this week. We also need to strengthen the eastern flank, and we need to make sure that Finland and Sweden are able to join NATO as soon as possible.

We need to do a lot more on cyber warfare to protect ourselves against the hybrid threat.

We have to be ready for the long haul in supporting Ukraine because we are committed to protecting freedom and democracy.

Now is not the time to be complacent. There should be no talk of ceasefires or appeasing Putin. We need to make sure that Ukraine wins, that Russia withdraws, and that we never see this type of Russian aggression again.

International Affairs PM call with Prime Minister of Hungary: 27 May 202…