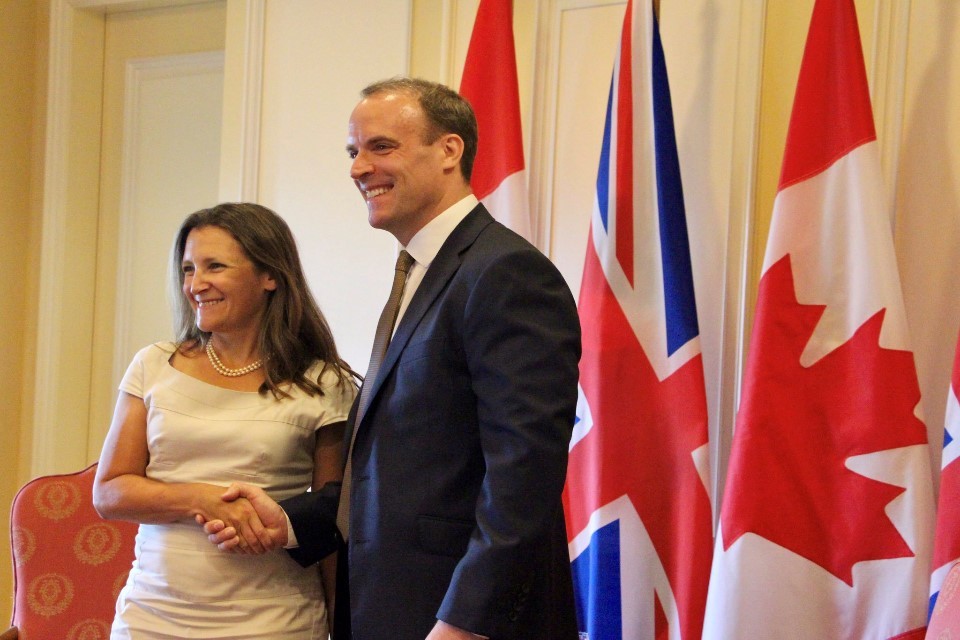 Thank you very much Chrystia for your exceptionally warm welcome.

It’s a huge pleasure and a privilege to visit Toronto on my second week as Foreign Secretary. As Chrystia’s already said, it’s our second proper bilateral. I hope that shows how much we prize our precious friendship with Canada and the Canadian people and how much we want to work on taking it from strength to strength in the future.

Canada is the only country who sits alongside Britain in NATO, the G7, the G20, the Commonwealth and the Five Eyes intelligence alliance.

Our friendship is based on the ties of history – language, culture and, above all, on shared values. Values which are inherent to our political systems but also the challenges we face globally.

Two months ago, we commemorated the 75th anniversary of D-Day in 1944, when the British and Canadian soldiers landed side-by-side on the very same beaches in Normandy. We think about the huge sacrifice made on all side in that noble cause and today Britain and Canada stand together as we will always do in defence of freedom and democracy.

We’ve got British troops leading NATO’s deployment in Estonia; and next door, Canadian forces taking up that responsibility in Latvia.

Our countries speak out together when our ideals come under attack. As Chrystia mentioned, that is the case whether it’s issues relating to Canadian nationals or Canadian interests but also UK interests.

Last month Chrystia joined my predecessor, Jeremy Hunt, to co-host a conference on media freedom in London and we’re delighted to think about ways to strengthen it for the second round and I’m sure we will be talking about the detail of that. It is something we share and prize with Chrystia, and the Canadians.

Canada was a stalwart ally in our defence after the Russian nerve agent attack in Salisbury last year. We appreciated that solidarity and appreciate those moments when you stand shoulder to shoulder with us in defence of our shared values.

In the same way, we share Canada’s concerns about the detention of Michael Kovrig and Michael Spavor in China. We discussed their cases today.

If you want to take a really great example of evidence of our relationship of trust, then take Canada’s decision in February to choose the British Type 26 design for the new Canadian warship. We’re really proud that that’s going to be a central part of the Royal Canadian Navy for decades to come.

We both benefit from thriving economic, commercial ties. We’re looking for win-win out of investment and free trade. We’ve got Canadian pension funds that have invested £30 billion in UK real estate and infrastructure, including ports and airports. And UK experts are creating new partnerships in Artificial Intelligence, including right here in Toronto.

For our part, the UK is at an important historic crossroads and the Government is very clear that we will take the UK out of the EU on 31 October. We’re doing that because there is a democratic verdict in the 2016 referendum that must be respected, whether or not we conclude a deal with the EU. Just to be clear and to reaffirm what the Government’s consistent line has been, we might get and hope to reach agreement with our EU partners, but we will leave the EU in any event at the end of October.

With that in mind, we need to ensure that everything possible is in place to ensure continuity of trade after Brexit for the benefit of companies and consumers in both our countries.

Chrystia and I agreed on the need for seamless transition. We’re going to be looking into taking that work forward with officials in our teams in the weeks ahead in the run up to the end of October.

I’m pleased to be able to say in Canada that, for the UK, Brexit is not just about risk management, although that’s important and I wouldn’t want to be glib or not take that very seriously. But it is also – and our Prime Minister has been very clear about that – also about grasping the enormous opportunities of our two countries.

Yes, we’re going to remain good European neighbours, partners and friends in the future. But we do want to grasp those global opportunities, and we want to expand our horizons and raise our level of ambitions in the world.

As part of that we want to take our friendship with Canada and the Canadian people to the next level on trade, on security co-operation, on human rights, and on those global challenges that are beyond any particular region like tackling climate change.

That’s why I’ve made this visit to Canada my first bilateral trip, one of my top and most immediate priorities, and I just want to say, thank you Chrystia. We really welcome the valuable relationship we’ve got with the Canadian Government.