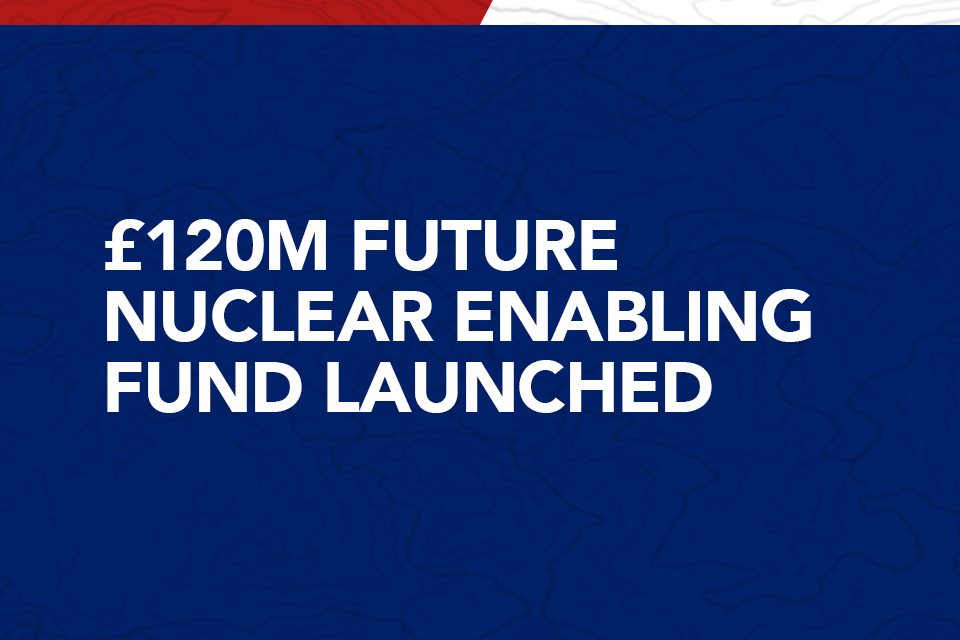 A £120 million government fund designed to unlock and accelerate new nuclear technologies while encouraging new players into the market opens today (13 May).

The Future Nuclear Enabling Fund will help to realise the government’s ambition to approve 8 new reactors by 2030, as committed to in the British Energy Security Strategy in April.

It will provide targeted, competitively-allocated government grants which will help nuclear construction projects, including small modular reactors, to attract the private investment they need to help make them a reality.

Nuclear power is a key part of the UK’s energy mix, helping to reduce dependence on global gas markets, boosting UK energy independence, protecting consumers from high energy bills and stimulating investment in nuclear as a clean energy technology of the future.

Our new £120 million fund will push forward our plan to deploy a new fleet of nuclear power stations as part of a British nuclear renaissance.

By encouraging new companies to come forward and build in Britain, we can spur greater competition in the market to cut development costs so consumers benefit in the long-term.

Nuclear is central to our long-term plan bolster the UK’s energy security with cheaper, cleaner, home-grown power, while creating thousands of high-skilled jobs across our country.

This government is backing nuclear power as a critical part of our British Energy Security Strategy.

This Fund will accelerate the development of new nuclear – from SMRs to larger-projects – and bring fresh innovation into the market.

The Future Nuclear Enabling Fund is expected to support industry investment in nuclear, offer opportunities to projects in every region of the UK and create high-skilled jobs, as well as boosting the resilience and capability of UK nuclear supply chains.

The government is today asking interested parties to register their interest in bidding for funding and inviting further information on potential future projects. It is also inviting nuclear stakeholders who are not planning on bidding for the Fund to provide information from their experience that will help to mature fund design ahead of opening the bid window in summer 2022.

All awards from the Future Nuclear Enabling Fund will be subject to robust eligibility and evaluation criteria and value for money assessments.

The government has also today appointed Simon Bowen as the Industry Adviser to the Department for Business, Energy and Industrial Strategy (BEIS) tasked with leading and helping to drive forward government proposals for a new Great British Nuclear vehicle.

This new body, announced last month in the British Energy Security Strategy, will be charged with helping nuclear projects through the development process and realising the government’s ambition of generating up to 24GW of nuclear-sourced energy by 2050.

Simon will bring substantial knowledge of both nuclear energy and the wider energy supply market as the government develops plans for Great British Nuclear. Simon will report jointly to the BEIS Secretary of State and the Prime Minister and will develop the plan for the set-up of GBN.

Through the Great British Nuclear body, the government expects to initiate the selection process in 2023 for further UK projects, with the intention that government will enter negotiations with the most credible projects to enable a potential government award of support as soon as possible, including but not limited to the Wylfa site.

We will ensure the UK is one of the best places in the world to invest in nuclear:

We will radically change how we deliver new nuclear projects: