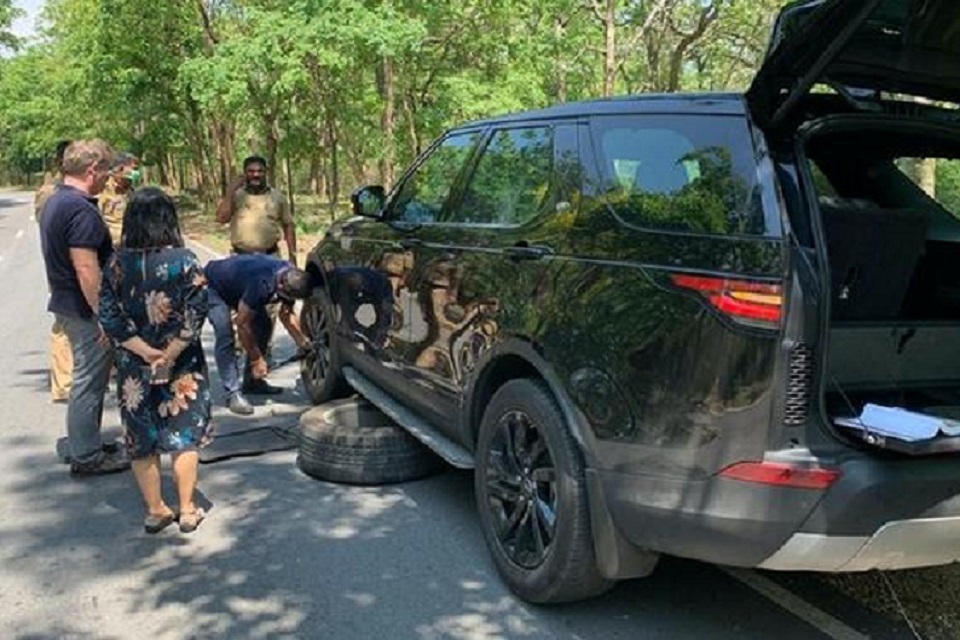 Deputy High Commissioner Jeremy Pilmore-Bedford and his team of five drove 12 hours from Bangalore to Cochin, while another team embarked on a 13 hour journey from Chennai to Trivandrum, to help British nationals board their charter flight home on April 15.

The groups had been stranded across Kerala and Tamil Nadu for four weeks after flight options in Southern India abruptly ceased when the pandemic escalated.

But on twisty and notoriously rough Western Ghats mountain roads on the way from Bangalore, the Foreign Office rescue team picked up a puncture in the middle of Bandipur Tiger Reserve. The reserve, which recently featured in the Sir David Attenborough-narrated documentary Wild Karnataka, is home to the second-biggest tiger population in India, with nearly 400 big cats believed to be roaming in the area.

With the team standing lookout, the Deputy High Commissioner raced to change the tyre under the blazing sun and rising humidity of the tropical forest. To add to the adventure, the road also runs through the middle of an elephant migration corridor, and the group encountered a female elephant during the ordeal.

“The breakdown was definitely a low point in our journey,” said Jeremy, “But we had so many people counting on us, we couldn’t end up as a tiger’s tiffin. Changing tyres isn’t your average diplomatic activity, but there was nothing we weren’t prepared to do to get our people home.”

After successfully changing the tyre, the team ploughed on to Cochin, arriving just in time to help the 260 stranded travellers onto an emergency Foreign Office flight – many of whom had spent between six and 12 hours on transport arranged by the High Commission to meet the flight.

Meanwhile, a group of 42 students and teachers from an international school, stranded in the hills of Ooty, also in the Western Ghats region, negotiated a tough 8-hour journey across state borders to meet an exhausted FCO staff member, who had driven 36 hours and 2,000km from Chennai to Kerala to meet the group and hand-deliver an emergency travel document to allow them to fly.

Protocol Assistant at the Deputy High Commission in Chennai, Rajesh Bhaskaran, who made the gruelling journey said: “Though the journey was arduous and riddled with multiple police checkpoints, at the end it was a hugely satisfying experience to help stranded British nationals from remote parts of southern India fly back home safely.

“But almost zero traffic during the lockdown made me feel like a ‘King of the road’ to deliver emergency travel documents in the nick of time.”

Despite the extreme efforts to get British travellers home from Cochin, the team’s work did not stop there, and on return to Bangalore, they supported a further three charter flights to get around 400 British travellers home. British eight-year-old Mayzia Richardson, from Derby, who was among the travellers, summed up the jubilation of travellers on their way home, singing ‘A Million Dreams’ from hit film the Greatest Showman at the check-in desk of her Foreign Office charter flight home.

International Affairs Change of Her Majesty’s Ambassador to Montenegro…