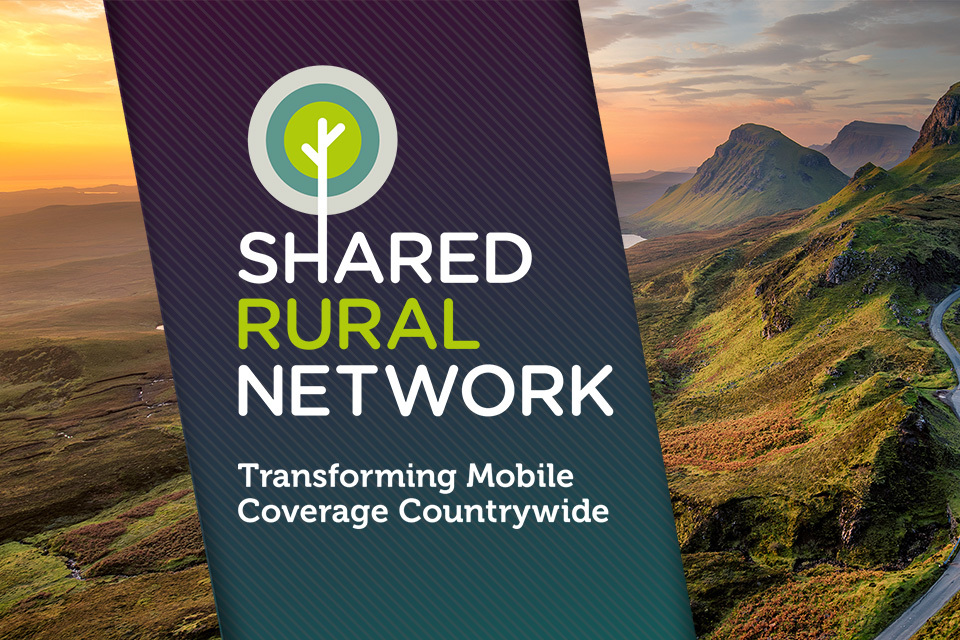 The Shared Rural Network is one of the first UK infrastructure programmes to confirm funding post-Brexit through a new process that is faster and less bureaucratic. The world-leading £1 billion government deal with the UK’s four Mobile Network Operators (MNOs) EE, O2, Three and Vodafone will see both public and private investment in a network of new and existing phone masts closing not-spots and levelling up connectivity across every corner of the UK.

Total not-spots are the hard-to-reach areas of the UK where there is currently no coverage from any mobile operator.

The Shared Rural Network is a key part of the government’s infrastructure revolution to level up and unlock new economic opportunities in every corner of the UK.

Mobile firms are making great progress boosting 4G services in countryside communities as part of their side of this landmark agreement.

With the publication of this notice, we shall now push on with making patchy or poor coverage a thing of the past as we build back better from the pandemic.

Closing total not spots will give rural consumers a better choice of providers, with more now offering coverage across new areas for the first time. People will also benefit from improved access to mobile banking, government and emergency services as well as shopping and other online benefits thanks to improved connectivity.

The funding will enable new masts to be built, getting rid of total not spots, and to upgrade radio equipment built as part of the Home Office’s Emergency Services Network (ESN) Programme which will enable MNOs to provide even more coverage.

The MNOs have already begun work as part of the deal to close the majority of ‘partial not-spots’ – areas where there is coverage from at least one but not all operators – by mid-2024. There have already been over 700 sites announced so far this year to help close not-spots across the UK.

With £500 million in funding now available, the government and the MNOs remain confident that combined coverage will be delivered to 95% of the UK by the end of 2025, with areas around the UK starting to see improvements to 4G coverage long before completion.

The measure has been developed in compliance with the UK’s subsidy obligations under the UK-EU Trade and Co-operation Agreement, including the publication of a transparency notice. The Shared Rural Network notice sets out how the programme will pursue better coverage to remedy market failures in a proportionate way, and how the subsidy will mitigate any negative effects to EU–UK trade and investment.

The government announced on 9 March 2020 that it had agreed a £1 billion deal with the four Mobile Network Operators (MNOs) to deliver the SRN.The programme is made up of private and publicly funded elements:

We are already starting to see improvements as a result of the SRN programme. Devauden in Wales became the first rural community to benefit from the programme, when a mast went live in the village on 17 June 2020. This was followed by Longnor in the Peak District on 23 July.

Initial radio plans have now been submitted to the regulator, Ofcom, and an open, fair and transparent competitive procurement process for the publicly funded elements of the programme has commenced.

On 27 January 2021, the operators O2, Three and Vodafone announced a new joint venture to build and share 222 new mobile masts to boost rural coverage across the United Kingdom and deliver the first stage of the SRN. This programme of investment will increase coverage in each of the UK nations – 124 new sites will be built in Scotland, 33 in Wales, 11 in Northern Ireland, and 54 in England, with each operator leading on 74 of the new sites.

On 10 March representatives of the UK’s mobile operators, EE, O2, Three and Vodafone signed a key agreement in the development of the Shared Rural Network. The contract sets out how the four organisations will work together to build new sites that will deliver mobile broadband in areas where there is no existing 4G coverage from any operator (total not spots).

EU State aid rules no longer apply to subsidies granted from 1 January 2021 in the UK, except for aid within scope of the Withdrawal Agreement, including aid under Article 10 of the Northern Ireland Protocol. However, public authorities must comply with our international commitments on subsidies in the UK-EU Trade and Co-operation agreement (TCA), and other trade agreements, as well as the World Trade Organisation rules on subsidies.

From 1 January 2020, subject to any applicable exemptions, a subsidy in scope of the TCA must follow and apply the principles and prohibitions in the agreement before it can be awarded. The TCA also requires certain information about the subsidy award to be made publicly available. BEIS has developed a new publicly accessible transparency database for public authorities to record subsidies to meet this obligation.

Having left the EU, we can design a subsidy control regime that reflects the needs of the UK economy. On 3 February, the Government published a consultation on the future UK subsidy regime, the consultation will run for 8 weeks until 31 March, and invites views from stakeholders on its design. Subject to the outcome of the consultation, the Government will bring forward legislation in due course and before the end of the year.

Treasury Direction made under Section 76 of the Coronavirus Act 2020