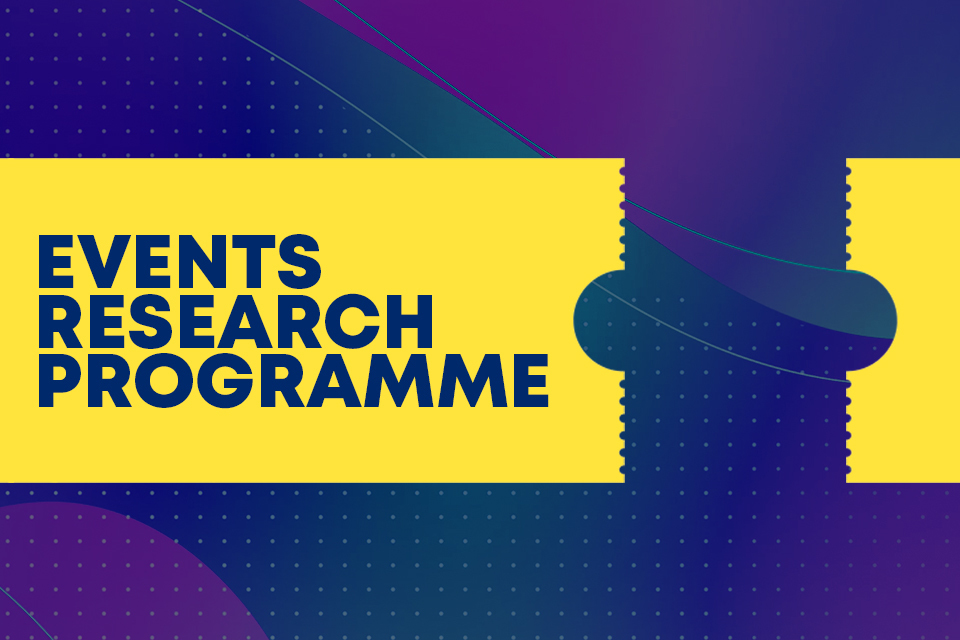 The government has published the report of the first phase of its ground-breaking Events Research Programme (ERP) which has helped to understand how the risk of transmission can be reduced at large events when mitigating measures are introduced.

While additional ERP events continue to gather further evidence, no decisions have been taken on the full reopening of mass events. The government will set out its position on this ahead of Step 4 in the roadmap.

The study gathered significant data on behaviour, movement, ventilation and testing and has shown that with mitigating factors, such as social distancing at pinch points, face coverings and staggered entry and exit times, events can be conducted more safely at increased capacities while maintaining a low risk of transmission.

The ERP was commissioned by the Prime Minister in February 2021 as part of the Government’s roadmap out of lockdown, and is designed to explore how reopening of events can be conducted safely, including without social distancing, whilst limiting the transmission of COVID-19 as much as possible.

The aim of the review was to build an evidence base to inform how the public could return as safely as possible to attend events such as sport, theatre, live music and business events by conducting pilot events across a range of settings and sectors. Pilots have been run in a structured, scientifically and ethically robust way to enable events in the programme to happen at a scale not previously tested since the start of the pandemic.

The programme involved a total of 58,000 participants at venues across the country including Liverpool, Sheffield and London. It was supported by event organisers, local authority and public health teams, national and local government officials and nine scientific research teams from five UK universities. The work was overseen by an independently-chaired science and ethics board.

The phase one programme required all attendees to prove a negative lateral flow test as the condition of entry into the events. All attendees were also asked to take a voluntary pre and post event PCR test to aid the programme’s research. Pilot events tested a range of mitigating factors including staggered entry and exit times and ventilation in venues as well as testing the suspension of non-pharmaceutical interventions such as face masks and social distancing for research purposes.

The report confirms that 28 cases of Covid-19 were recorded from all available data during the ERP’s first nine events. The report acknowledges that these numbers reflect the rigorous testing regime in place for attendance at each event and relatively low levels of community prevalence of Covid-19 at the time of running the first phase of pilots. It also acknowledges that uptake of post event PCR tests, used to measure transmission, was also low.

Our innovative and science led Events Research Programme is helping us to better understand how the risk of transmission at major events can be effectively mitigated.

The findings and learnings will help event organisers plan for large audiences as we move to Step 4 of the roadmap.

I would like to thank this programme’s chief advisers Nicholas Hytner and David Ross, all the event organisers, and the scientists and researchers for their important work.

These events are so important for our wellbeing, our sense of community and togetherness, and they have been sorely missed.

This programme has shown that through the public demonstrating their status we have been able to track the virus, creating a safer space for the public to get back to the events they love.

The findings from the first phase of this programme will help facilitate the return of what so many of us enjoy: attending exciting and top quality events throughout the country when it is safe to do so.

Our number one priority has been to try and get fans back into grounds, theaters and events spaces as quickly and as safely as possible.

Despite the huge challenges presented by the pandemic the events industry has worked tirelessly alongside the Government to try and make this happen.

It has been a huge team effort and the research and data that we are publishing today will be invaluable for anyone hosting an event once the economy fully reopens.

A second phase of pilot events has completed, with group stage UEFA EURO 2020 matches hosted at Wembley Stadium, the Download Pilot music festival, the England v New Zealand test match at Edgbaston and Royal Ascot having taken place this month. Research into the events is still being gathered and analysed by the ERP science team.

The government is currently in live discussions with cultural and sporting events to include them in an expanded third phase designed to further trial testing and vaccine status in the form of the NHS COVID Pass (via the NHS App) to allow crowds back safely and efficiently.

The third phase of the ERP will include Wimbledon Championships, The Open Championship, Goodwood Festival of Speed, Home and Gift 2021, Rugby League’s Challenge Cup and 1895 Cup Finals. Latitude and the Grange Opera Festival. Further events will be added in due course.

The pilots will be subject to local and national public health guidance. The findings from the events will feed into the government’s review of certification.

The pilots will continue to examine a range of settings, venue types, and activity types so that the data is generalisable, and findings can inform thinking on the reopening of similar settings across multiple sectors.

Scientific studies were conducted across the nine pilots with scientists collecting and analysing significant quantities of data. Teams from the University of Liverpool, Loughborough University, University College London, the University of Edinburgh and Movement Strategies, a company that specialises in people movement and crowd dynamics, undertook research core to the ERP. These studies explored environmental factors such as ventilation and crowd movement, behavioural responses of participants, and evidence of transmission through testing of attendees. Read the research protocols in full.

*At the time of writing figures on face covering compliance in Wembley stadium’s seating bowl for the Emirates FA Cup Final were unavailable. Averages shown throughout this section are averages of individual samples, unweighted.

**As set by the Chartered Institution for Building Services Engineers (CIBSE) and based on advice from the Scientific Advisory Group for Emergencies (SAGE).

Coronavirus Additional support for Kirklees scaled back as spr…