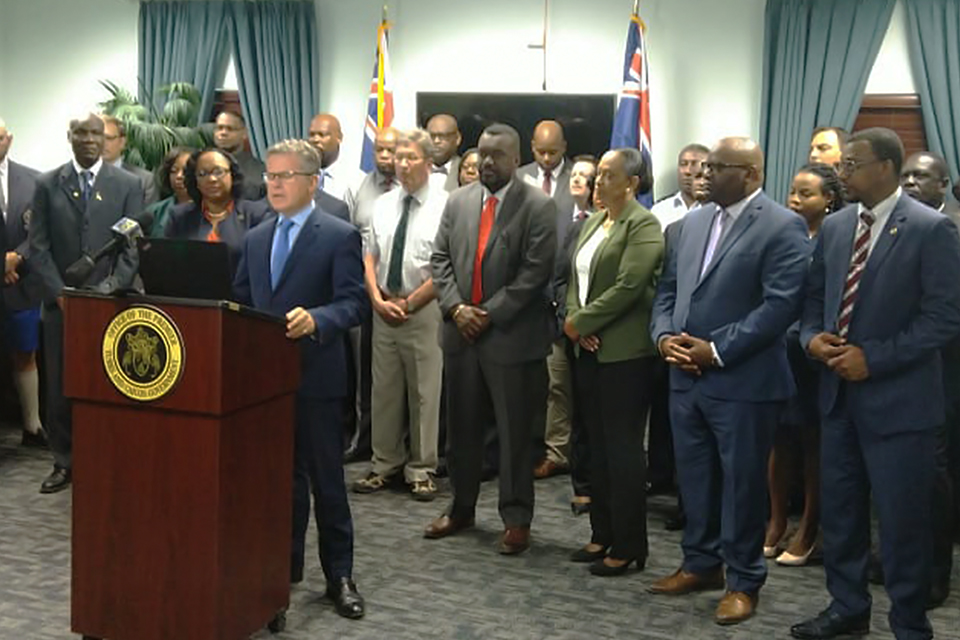 TCI now, for the first time, has a National Security Strategy. The need for TCI to have this was driven by the Premier and it became one of my first priorities, on arrival, to help her deliver it. It sat very well with my own initial priorities, outlined in my inauguration speech, around crime, illegal immigration and hurricane preparedness.

The most important line in the strategy we launch today is the last sentence of the introduction “In terms of the leadership needed to tackle National Security challenges the Premier’s and the Governor’s Office stand together”. When it comes to the specifics of crime and policing, because national security is much more than crime, we also bring the Commissioner into this top team.

In these three roles we combine all the powers we need: funding through taxing and spending; democratic accountability; decisions around operational deployment; executive and emergency powers if needed; and the ability to reach beyond our own borders. If we were pulling against each other, or even working in parallel rather than together, none of us could deliver in the way the country rightly demands. But that’s explicitly not the case.

All that I’m about to say would not have been possible without the Strategy we launch today – and the thinking that went onto it. The institutions that flow from it, help consolidate this ‘top team relationship’ so it’s not personality dependent, but the way Government functions in the future to look after the safety and security of its people.

With one team at the top, we intend to create a ‘one government team’ around us to deal with these issues. The team you see with us today are among the top thirty officials in TCI Government and Policing that will execute the strategy. We are also grateful to be joined – as not disinterested observers – by the Commissioner of Montserrat, the Deputy Commissioner from Cayman and the Assistant Commissioner from Bermuda. We are strengthened by your presence Gentlemen.

All of us are presently involved in a one week training exercise run by the Royal Military Academy Sandhurst but we have taken an hour out of that course to be with you today. We are in a classroom learning – you are never too old to learn – and in learning, as much from each other – we are coming together as a team, sharing experiences, forming, storming and norming around one shared endeavour: to make this country safer.

All in this room agree that the fact this country is small should be our strength in terms of national security. Our communication and co-operation across Government should be straightforward. We should be agile. We should be efficient. But let’s be frank with each other, we are presently none of these things – so this week is important, indeed vital, in that process of change.

A public version of the strategy will be published but I suspect the public are interested today, not in what’s written on paper, but what’s happening as a result of the Strategy in the real world. That’s what I intend to focus on. First, once you have the right strategy, you then need the right structures and the people with the right skills to implement it. So that’s where I start:

Looking further down into the strategy, I intend to use my remaining time today, to look at the two issues that are at the top of the public’s agenda: Illegal Immigration and separately, because it’s intellectually lazy to conflate the two, Serious Crime.

But before I do that I want to emphasise that the most pressing threat to our National Security – over a period of decades – is going to be natural disaster. The seas around us are warming. They provide the fuel for hurricanes, and we are in their path. You’ll see in the strategy it’s in the top two we must tackle – we have to move from a position where we focus on ‘recovery’ to one where much more effort is placed on ‘resilience’. Countries in the Caribbean that don’t, will go into perpetual decline, unable to recover properly between each natural disaster.

Worth also putting on record that, other than Natural Disaster, Illegal Immigration and Serious Crime, the other six issues the Strategy calls out as threats are: critical national infrastructure failure; serious public disorder; maritime sovereignty; food security and scarcity; cyber and, finally; terrorism, money laundering and financing of terrorism. Before moving onto crime let me start with what we are doing to reverse the seriously destabilising impact illegal immigration has on our society.

And now to crime:

Conclusion: I have spent previous press conferences expressing my heartfelt thoughts about the impact of crime. We rightly focus on murder but the truth is all crime corrodes our society and damages our people. Even new to these Islands I’d met the young man who had been simply introduced to me as ‘Spooky’, the DJ at the basketball games I attend.

And I’d met a previous victim of murder, Jeffrey, and thought what a convivial and engaging bar tender he was and what a great young father he must be. This is a small society where murder feels close because it is close. Not only do families grieve, but with each murder the country grieves. The most important thing I can do to honour their short lives, the most important thing we can do in this room is recognise we all have personal agency in this endeavour.

If you judge we are serious, the greatest thing you can do to honour those who have become victims is become equally serious yourself in playing your part. Many I know already feel this way. We need people actively building an ever healthier society, in whatever way they can, using whatever talent is at their disposal.

I’m not going to appeal for information (others better placed than me can do that, although I’d note it’s the greatest contribution some could make) but I am – unapologetically – going to ask for national solidarity, for national unity, when it comes to national security.

I’ve been particularly grateful to the Leader of the Opposition for his thoughtful, measured and constructive advice, to me personally and in a more formal consultation, as we have developed this. As a national leader, but also as an ex-Police Officer, his instincts have not only been important but genuinely valuable. To the rest of you I say, given we can find so many ways to divide ourselves, this isn’t one of the issues on which we need to seek division and we achieve great collective strength if we don’t.

So I end with one of my favourite quotes, not biblical in this instance, but from Sun Tzu – one of history’s great military philosophers: “Strategy without tactics” he wrote “is the slowest route to victory”. “Tactics without strategy is the noise before defeat.”

TCI now has a strategy. Within it, I’ve just described some of the tactics we are already employing and capability we are building. I, the Premier, the Commissioner and all those in this room, representing every branch of Government involved in this shared enterprise, are committed to delivering a safe environment. I hope you can, in your own way, feel part of this because in truth you – the public – are without doubt our greatest national security asset. Extrapolating slightly from the Sun Tzu quote: national unity, around national security, would be the fastest route to success.

And with that, may God Bless these Turks and Caicos Islands.

by Editor time to read: 13 min

International Affairs Peace for both Israelis and Palestinians is long o…