Covered with more than 13,000 glazed ivory-white tiles, the contemporary and functional design draws inspiration from historic London Tube stations, such as nearby Great Portland Street, and will help reflect light into the surrounding streets.

Designed by architects Weston Williamson + Partners, with William Matthews Associates, the four-storey cube will contain a substation and electrical equipment as well as a vent shaft for the Northern line.

A pattern of perforated tiles will allow air into the building and variate the façade – prompting HS2’s designers to dub it the ‘sugar cube’.

The glazed terracotta tiles – known as faience tiles – are an instantly recognisable feature of many London Underground stations, including South Kensington, Covent Garden and the former Euston Tube stations. It is robust, durable and low maintenance, making it ideal for functional buildings.

The use of tiles also echoes the traditional practice of cladding the back of tall buildings with glazed white tiles to bring light into courtyards and confined spaces.

HS2 will transform Euston and more than double the number of seats out of the station during peak hours. It will improve journeys for millions of people every year as well as unlocking opportunities for new homes, shops and jobs around the wider area.

The new vent shaft and substation will be one of the first things we build and it’s important we get it right. I’m pleased that Camden has given us the green light and i hope this intriguing, functional and contemporary design will be welcomed by all those who live, work and travel through Euston.

The Euston vent shaft is an important and vital piece of urban infrastructure which facilitates a comfortable environment for all users. It has been a close collaborative design process and the result builds on the best of Britain’s infrastructure heritage with the use of materials and expressing functional requirements.

At Euston, the arrival of HS2 will more than double capacity, improving journeys for the 44 million people who use the station every year, as well as releasing space for extra commuter services into the capital. As a result commuters from places like Milton Keynes could see a 76% increase in the number of seats into Euston during peak hours. 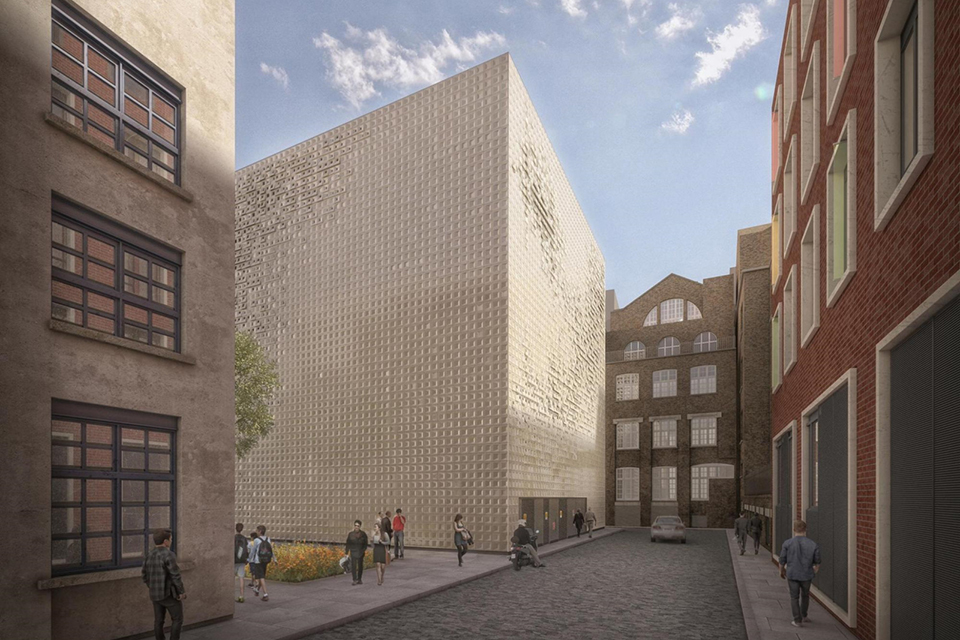 The plans for the vent shaft were approved by the London Borough of Camden, the local planning authority, under Schedule 17 of the HS2 Act, subject to an agreement on suitable lighting. Its construction will allow the old vent shaft to be removed to make way for the new platforms.

The new shaft will be on Stephenson Way, a small street behind Euston Road, on the site of Wolfson House, which is currently being demolished. The structure will be as big below ground as above, with tunnels linking it to the Northern line.

Wolfson House, an eight-storey 1960s office block, was originally built for University College London’s science department. An HS2 team made up of Costain and Skanska (CSjv) are managing the demolition of the building alongside sub-contractors John F Hunt.

A top-down approach is being taken to the demolition, with the building surrounded by an acoustic wrap to limit dust and noise, and the top floor already gone. In total, more than 2,300 tonnes of concrete and 200 tonnes of steel are expected to be removed during the work, which is due to finish around the end of the year.

Twenty-one tonnes of asbestos was painstakingly removed during the early stages of the project, with a specialist team from John F Hunt brought in to complete the job.

Transport Motorists urged to check rules on towing before su…
0
✖