The UK’s supermarkets have achieved a record improvement in their dealings with groceries suppliers, Christine Tacon’s seventh and final GCA survey has revealed.

Early analysis of suppliers’ responses to the comprehensive annual groceries sector survey shows that retailer compliance with the Groceries Supply Code of Practice is at an all-time high.

A record of nearly 1,500 direct suppliers to the 13 regulated retailers completed the survey and just 36% said they had experienced a Code-related issue at any point in the past 12 months – down from 41% in 2019.

This was a particularly striking result as the survey period included three weeks when the sector was facing the challenge of huge increases in consumer buying of certain products as the COVID-19 emergency hit. And it represents significant progress since the first survey was conducted in 2014 when 79% of suppliers said they had experienced issues. 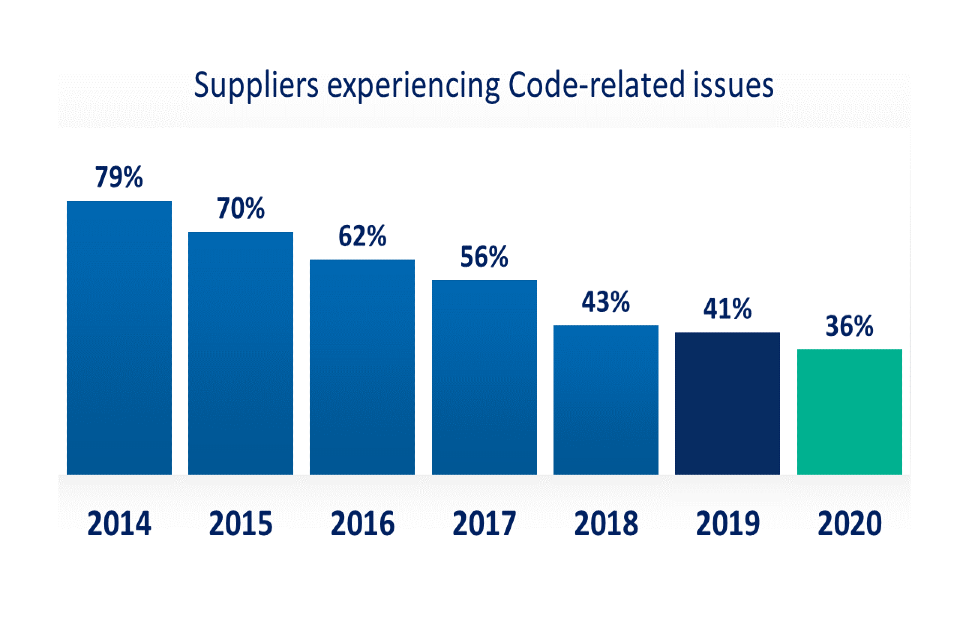 In addition, direct suppliers recognised improvements across every Code-related issue. The most common issues experienced by suppliers in 2020 related to forecasting, delay in payments and de-listing. Each of these is now at its lowest reported level – at 13%, 12% and 12% respectively.

In comparison, 35% of suppliers reported experiencing delay in payments in 2014, 33% experienced issues with forecasting and 22% with de-listing. The most reported issue in 2014 – forensic auditing – which 45% of suppliers highlighted, is now at just 5%.

This is my final survey as GCA as I will be stepping down later in 2020 after seven years in the role and it tells an extremely positive story.

I am delighted to report that in a year when an additional retailer – TJ Morris – was included in the survey and the sector faced the challenge of COVID-19 my survey demonstrates that UK supermarkets continue to make substantial progress.

The survey period included three weeks when the sector was under huge pressure but the data shows no adverse impact on compliance with the Code as retailers and suppliers raced to keep supermarket shelves filled.

Indeed it corroborates my own discussions with the retailers who have told me not one supplier has raised an issue with their Code Compliance Officers or asked for an issue to be escalated. I made it clear in my position statement issued on 17 March that suppliers should not wait to raise issues with retailers.

This is a testament to the stronger and more effective communication between retailers and suppliers which the GCA has fostered over the past seven years and which has proved so valuable during this emergency.

It also demonstrates that the Code has provided the flexibility retailers need to maintain a vital and efficient supply chain that is getting groceries to the consumer.

The GCA is continuing to analyse the details of the survey carried out on its behalf by the independent polling company YouGov and will publish more information, including how suppliers rank the retailers for Code compliance, in the coming week.