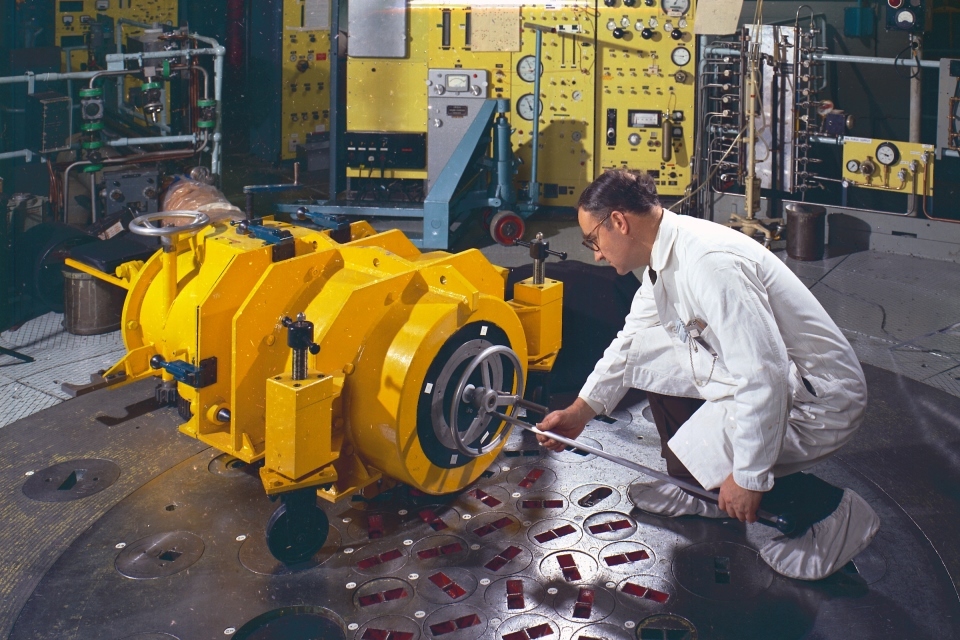 In over 75 years of operation the Magnox site at Harwell has notched up numerous world firsts – and been at the forefront of UK nuclear research.

This includes vast achievements like the construction of the first nuclear reactor in Western Europe and being celebrated for its pioneering work in laser isotope separation.

Over its lifespan Harwell has made enormous contributions to the development of nuclear energy, and many other major scientific and technological advances. The site has evolved to adapt to its many changing circumstances, and those who have worked there have adapted too.

The site has been a beacon for our industry and should be rightly proud of its achievements that have helped shape the world we live in today.

At the same time the site has provided a ‘work family’ and training ground for many of its staff which has lasted decades. Sam Berryman who currently works at Harwell as a project manager, and joined at the age of 16, is testament to this, her Grandad worked on the site from the mid 1950’s, her Dad from 1960 to 1998 and her son is currently working on site, so four generations of the same family!

To add to this my parents met at the tank farm and both my brothers were home birthed in a UKAEA prefab.

During the early years when the nuclear industry was in need of data upon which to base the design of its reactors and associated fuel cycle plant, Harwell provided much of that essential information.

Fourteen experimental reactors were built, with GLEEP and BEPO the first two to be constructed. Both were used to provide data for the Windscale reactors, with GLEEP running for an astonishing 43 years.

A dozen other reactors soon followed, arguably the most important of which were two large materials testing reactors, DIDO and PLUTO. Several zero and low energy reactors were also built, including ZEPHYR and NEPTUNE. ZETA was built to advance the understanding of fusion power, work which was later moved to Culham.

To support the nuclear programme, a range of ground-breaking research facilities were built, with Harwell’s radiochemistry laboratory one of the most advanced in the world. Van de Graaff accelerators, a Tandem generator and cyclotron were built to probe into the atom, alongside purpose built chemistry, chemical engineering and materials research laboratories.

Waste management facilities were constructed to treat active and non-active solid and liquid radioactive waste from these activities.

By the late 1960s the need for fundamental nuclear research dwindled, which led to decades of change as the focus moved towards applied nuclear and non-nuclear research.

Harwell diversified into many new areas, materials technology, non-destructive testing, and electronics to name but a few. Spin off technologies benefited a wide range of industries, such as the offshore oil and gas industries, medical, computer programming and chemical engineering.

Some of the more high profile projects the site was involved in included detecting metal fatigue in Big Ben; contributing to the investigation into the King’s Cross fire, measuring cosmic ray doses on Concorde and carbon dating ancient artefacts; including the Winchester Round Table.

Another first for Harwell came in the late 1980s when it took delivery of what at the time was the world’s most powerful computer, the CRAY-2 supercomputer. During this time laser beams were being used to investigate aspects of the basic science and technology of laser isotope separation.

The 1990s brought about many changes, with research and laboratories ceasing operations and the focus now on decommissioning and environmental restoration.

During this time the last of Harwell’s remaining three reactors were closed, and many of the engineers and scientists who helped build and run Harwell’s experimental facilities concentrated their skills on decommissioning, radioactive waste management, and site restoration.

Harwell has now completed the dismantling of the GLEEP reactor, the Tandem Van Der Graff Generator, and many purpose built laboratories, to name but a few. A number of facilities, including DIDO, PLUTO and BEPO remain, awaiting their final decommissioning journey.

Large areas of the site have been delicensed and removed from the controls of the Nuclear Installations Act and the security fence realigned. The delicensed land has formed part of the wider Harwell Campus which today has many scientific and space related tenants located there.

It’s a privilege to be involved in a site and with a workforce that is steeped in such history, and our job now is to safely and securely carry on with decommissioning and release the land for future use.

Work continues at pace, with the liquid effluent treatment plant land remediation project well advanced and the processing of legacy wastes and materials a key priority during this significant year.

Harwell’s history has been one of change, development and firsts across many industries. The dedication of the decommissioning workforce on the Harwell licensed site remains as professional and enthusiastic as it was at the birth of the nuclear age in the 1940s.