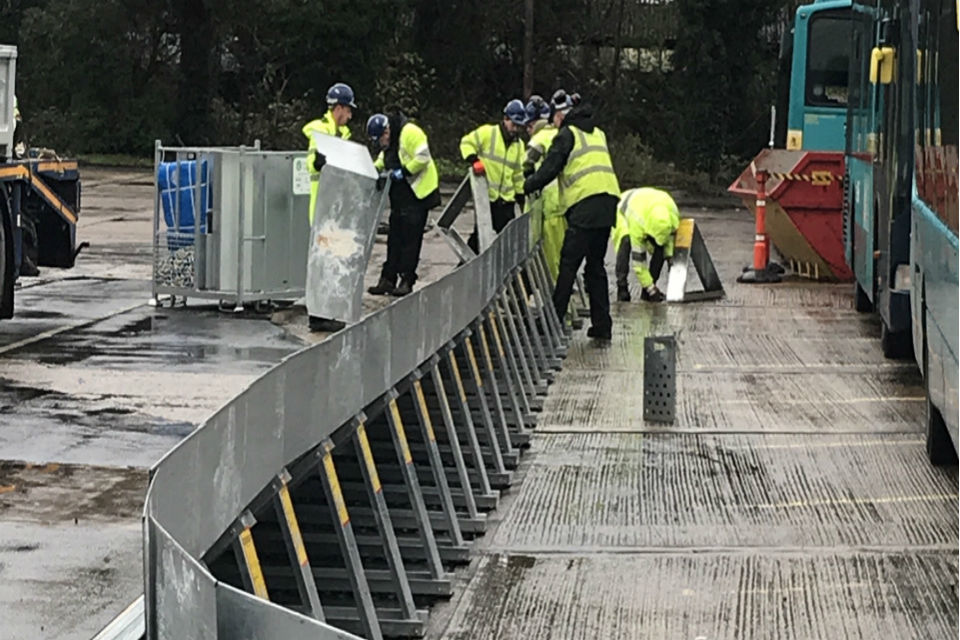 The Environment Agency is warning communities that persistent heavy rain could lead to an increased risk of flooding across South East England over the next few days.

The forecast heavy rain could cause surface water flooding in local communities, and see a rise in river levels, and travel disruption as roads and rail lines may be affected.

At midday today, there were 82 flood alerts, which means flooding is possible, while it is expected in another 28 locations across the region. With further rainfall forecast, this figure is likely to go up.

Heavy downpours across the South East have led to surface water flooding and significant travel disruption today, Friday 20 December, and may do so into the weekend. Due to the heavy rain, we have put up temporary flood barriers in Guildford, on Mary Road, through the bus depot and on to Leas Road, and Guildford Road Bridge in Leatherhead, protecting almost 70 properties in the two locations.

In response to recent rainfall and increasing river flows on the River Thames, the Environment Agency has operated the Maidenhead, Windsor and Eton Flood Alleviation Scheme, which includes the Jubilee River, which has been reducing the risk of flooding from the River Thames to approximately 3,000 properties in Maidenhead, Windsor and Eton since 2002.

We are assessing 3 rivers in the east of the region, the Mole, the Medway and the Stour, and will issue any local flood alerts or warnings locally as required.

Our teams have been out on the ground checking flood defences, clearing debris from rivers, and will continue to support our partners to reduce the impacts of the heavy rain. We will issue flood warnings and alerts where necessary.

We urge the public to prepare to take action when at risk of flooding, even if a temporary barrier is in place. There are a number of things you can do to prepare for flooding to keep yourself and your family safe. Find out if your home is at risk, sign-up for flood warnings and be ready to take action. For more information, visit GOV.UK or call Floodline on 0345 988 1188.

People should remain vigilant, check their flood-risk and plan to stay safe. We urge people to stay away from swollen rivers and not to walk or drive through flood water as just 30cm/12ins of flowing water is enough to move your car.

People on Twitter can follow updates on flood-risk on the Environment Agency’s South East and national accounts, @EnvAgencySE and @EnvAgency.

What are temporary barriers and how do they work?