More than 70 volunteers, from school pupils and road workers to councillors and residents, rolled up their sleeves and grabbed a bin liner in a day of action to tidy up the A453 – Remembrance Way – in Nottingham.

A large grassy bank was cleared and poppy seeds planted alongside the road which was given the name in recognition of the 453 armed forces personnel who lost their lives in Afghanistan, including a local resident from Clifton.

The mass effort saw the East Midlands Asset Delivery team – made up of Highways England and 22 partners – join forces with the local community including the NG11 Clean Champions. All of the time and materials were donated.

More than 80 bags of litter were collected in Clifton and the surrounding areas along the A453 by volunteers which also included students from the nearby Nottingham Trent University, local school children and councillors.

There were 30 volunteers from Highways England and its supply chain partners including Amey, Ground Control and Balvac. They were also supported by the nearby McDonald’s and Tesco which provided hot drinks and muffins. 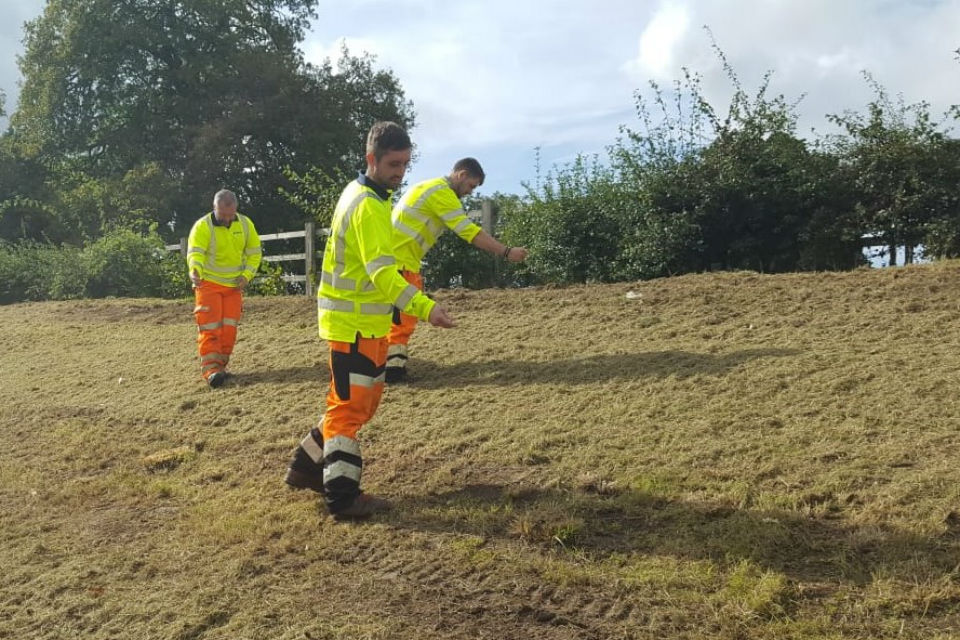 The dedication of the NG11 clean champions to keeping tidy one of the gateways into Nottingham, and the surrounding estates, is very admirable and a worthy cause that we were very happy to support.

We had a nice day working alongside local residents, who use our network, in weather that was very kind to us. We are now keeping our fingers crossed that we will have a stunning sea of red poppies come next year on one of the embankments along Remembrance Way.

The Nottingham Clean Champions initiative gives residents the opportunity to make a difference where they live. There is an acknowledgement that council street teams do not have the capacity to clear all the litter which irresponsible pedestrians and drivers continually discard, and Clean Champions are therefore prepared to volunteer their time to help.

Such events as this help keep the NG11 team motivated; it’s a thank you for their effort and it means that many more areas can be tackled. And when there are so many eager volunteers that go out in force, with a smile on their faces, in their hi-vis vests and uniforms, residents can’t help but notice the difference that is being made, in clearing so many areas. A fantastic collaborative event – a sterling effort – teamwork at its best.

Alma and her team do a tremendous job all year round and we were glad to support her and the team today. Scattering poppy seeds along Remembrance Way was a nice touch to end the day. We look forward to seeing them in bloom next spring, leaving a legacy of our joint efforts today. It is amazing what we can achieve for the customer when we work together!

A magnificent turn-out from Highways England was complemented by an equally large turnout from our local Clifton litter picking groups.

The primary route into Nottingham from the south – Remembrance Way – was topped and tailed to a pristine condition. This ‘entrance’ into Nottingham will now display banks of poppies in commemoration of the 453 soldiers who lost their lives in Afghanistan.