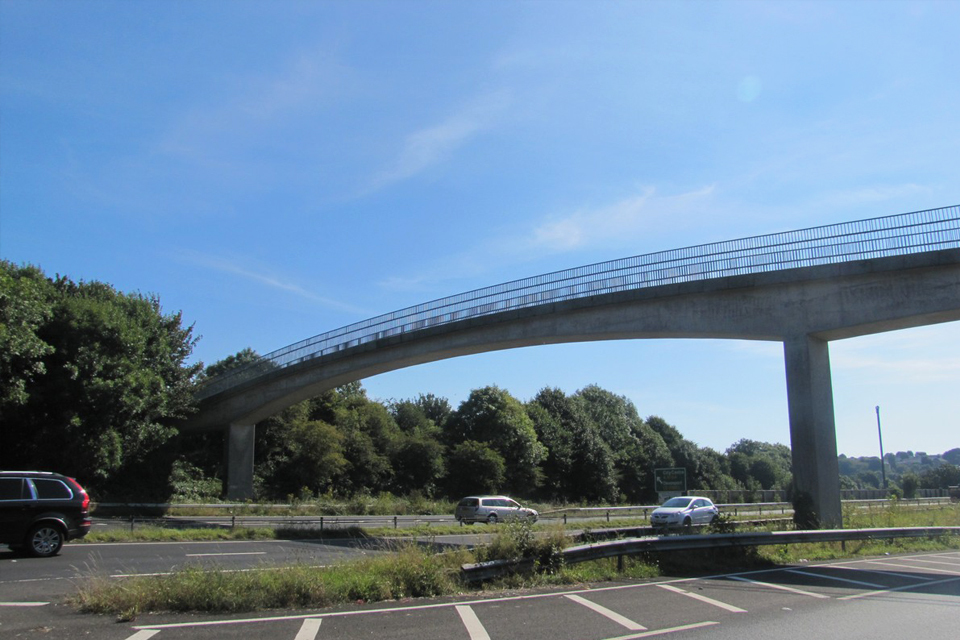 The company, responsible for England’s motorways and major A roads, will be funding and delivering a scheme, starting early next year, to widen the Mowhay Footbridge over the A38 to improve the safety of walkers and cyclists.

Since 2015 the company has invested more than £85 million towards the creation of 160 new and upgraded cycle ways across England, providing safe, attractive and accessible facilities for people to cycle for work, shopping and leisure.

Cycling and walking charity Sustrans recently completed a Highways England-funded cycle path scheme at the A38 Marsh Mills Interchange, and in the latest initiative, Highways England will be investing £2.2 million, from its Designated Users and communities fund, into a scheme to enhance the Mowhay bridge for shared use.

The existing bridge is not wide enough to safely accommodate both cyclists and walkers and work will start early in the new year to modify both the bridge and ramps to enable it to link up with a recently completed footway/cycleway, joining a local cycle route between residential areas to the north of the A38 and Plymouth city centre and the Dockyard to the south.

We’re committed to significantly improving safety across our road network, and the new and improved cycle and footpaths will make it much easier and safer for cyclists and pedestrians travelling to and from the centre of Plymouth.

At Highways England, our work goes beyond operating, maintaining and improving roads. We’re investing in the environment and communities surrounding our network, as well as the people travelling and working on it. We aim to address social and environmental issues and add real value to society.

We’re working closely with Plymouth City Council to realise this project – a glowing example of how this funding can make life better for communities living and working near our roads.

I am delighted that Highways England is investing in upgrading the footbridge. We are committed to encouraging and enabling more trips to be made on foot and by bike and making substantial investments in our walking and cycling network, to deliver more than 16 kilometres of new and improved traffic-free facilities on our strategic cycle network, alongside major roads and through green spaces, and 600 metres of on-road cycle lanes by April 2021.

We are pleased that this commitment to invest in active travel is shared by our partners and look forward to building on the positive relationship we have with Highways England.

Highways England manages four designated funds, allocated by the Government, to deliver benefits above and beyond building, maintaining and operating England’s strategic roads.

From protecting the environment and enhancing the landscape around roads, to improving safety, reducing congestion, and supporting communities, the aim is to make a positive difference to people’s lives.

Elsewhere in the south-west, designated funding has already provided safer journeys for cyclists around M5 Junction 16 near Bristol, the A35 and Sea Road South in Bridport and Cycle Route 45 around the A303 Solstice Park near Amesbury, while other ongoing schemes include:

Going forward, cyclists, pedestrians and horse riders will see more benefits over the next five years, with £169 million set aside in Highways England’s new Users and communities fund. The company is using the fund to improve services for users and neighbours of England’s motorways and major A-roads, including increasing the options people have for sustainable travel.