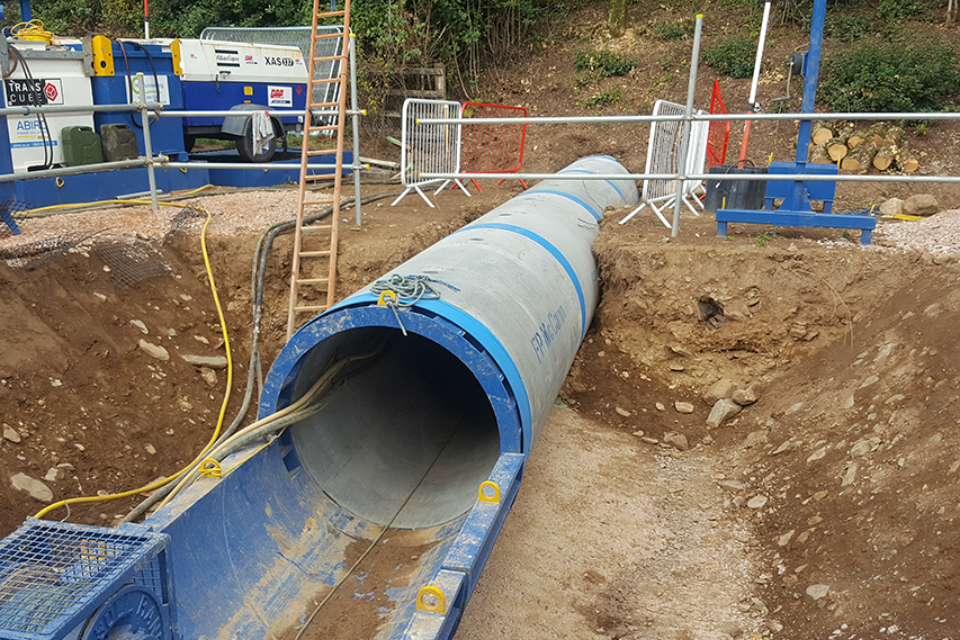 The trial project involves installing underground drainage pipes – tunnelled under the A38 at Dean Burn in Devon – and a filtration pond filled with engineered soil to trap oil and metal residue that are carried in the water running off the busy road.

The area is particularly important because right next to the road sits Potter’s Wood, a protected Site of Special Scientific Interest (SSSI), and as well as improving water quality, earth excavated from the pond and tunnel is being used to create bug hotels, butterfly scrapes and bee banks to benefit biodiversity.

The scheme, enabled by Highways England’s Environmental Designated Funds, has been designed by contractors Kier and delivered by South West Highways, and if successful, the system could be rolled out at other locations around the country’s major A roads and motorways.

We’re very excited to be trialling this new and innovative environmental system and if it’s successful we could be rolling it out across the country.

Our Designated Funds programme was developed so that we can invest in projects beyond our traditional road build and maintenance, and this is a glowing example of how this funding can have a positive impact on people and communities.

The filtration system provides a physical barrier to polluted water, then chemical and biological mechanisms work in combination to break down even more pollutants. It also has the advantage of taking up far less space than other treatment systems, which makes it very cost effective.

When completed, this work should significantly improve the quality of water running into Dean Burn and help to support the local environment and its wildlife.

The video footage reveals how small-scale tunnelling equipment was used to dig the modified drainage channel under the A38 while vehicles travelled above unaffected.

This is the first time we have used this machinery in the South West and it’s been such a success we have completed the tunnelling ahead of schedule and only two overnight lane closures have been needed.

The Dean Burn scheme started in July and with KJ Thulborn undertaking landscaping and environment features, the work is scheduled to be completed by 31 October.

Highways England is committed to addressing the impacts of its strategic road network, and last month work started on grasslands schemes on the A1 and A64 in Yorkshire, sowing the seeds for species of pollinators to flourish on the roadsides.

This follows the success of a similar scheme on the A38 in Devon which has just been awarded the Ciria’s BIG Biodiversity Challenge Pollinator Award for 2019.

A number of other Designated Funds projects are being undertaken elsewhere in the South West, including:

The Government allocated £675 million of funds to Highways England over a five-year spending period covering 2015 to 2020 – a series of ring-fenced funds designated to address a range of issues including Environment, Cycling, Safety and Integration, Air Quality and Innovation.

The Highways England Environmental Designated Fund of £225m has been set up to improve the environmental performance of the Strategic Road Network. It is to be used for projects that are ‘beyond business as usual’ which will help achieve benefits for one, or preferably a combination of areas including: cultural heritage, biodiversity, landscape, flooding and water quality, carbon emissions and noise pollution.

For more information regarding Highways England Designated Funds, go to the website.