For the first time, UK fighter jets will join this state-of-the-art ship in a significant milestone for the programme.

The deployment, known as ‘WESTLANT 19,’ will see the carrier conduct ‘Operational Testing’, with British F-35B Lightning jets embarking for the first time as she moves closer to her first operational deployment in 2021. The carrier will also spend time in Canada during her four-month travels.

Operational Testing is designed to put the jets, ship and supporting units through their paces. The tests allow the equipment and crew to operate under realistic warfighting scenarios to ready them for their first operational deployment.

From planning campaigns, briefing, preparing and arming the jets and pilots, to flying and sustaining them on their ‘mission,’ the trials ensure that the units can fight as one.

HMS Queen Elizabeth is symbolic of the UK’s global reach and power. As she enters this stage of the programme, she will demonstrate her immense engineering, capability and battle readiness.

As she makes her second voyage across the Atlantic, HMS Queen Elizabeth will also strengthen our special relationship with the US and Canada. Our naval forces will visit Canada then spend the coming months working and training side by side with the US to ensure the UK’s carrier strike is ready for operations in 2021. 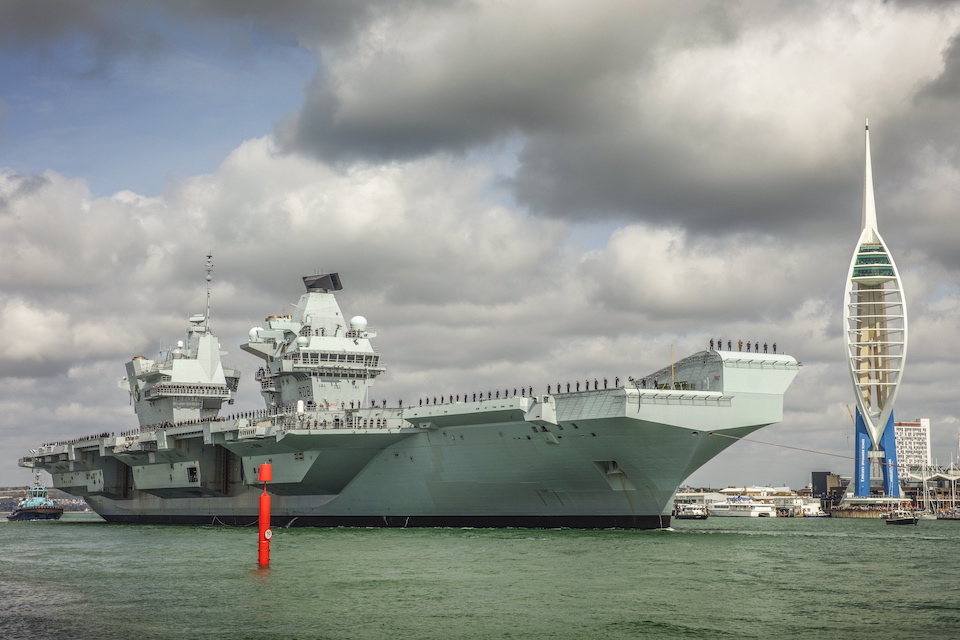 The deployment represents the continued positive relationship between the UK and US. Units from the United States Navy, US Air Force and US Marine Corps will all take part in the ‘WESTLANT 19’ deployment, further demonstrating the close partnership between the two NATO allies.

While at sea, HMS Queen Elizabeth is accompanied by other units of the Commander UK Carrier Strike Group (COMUKCSG) including a Type-45 destroyer, a Type-23 frigate and air assets from the Carrier Air Wing. This provides vital warfighting skills and training for each element to the Royal Navy’s potent carrier strike capabilities.

RFA Tideforce is providing tanker support to the Strike Group, which will be joined by ships and air assets from other nations throughout the deployment. Lima Company, 42 Commando Royal Marines based in Plymouth and a Role 2 Medical Team Afloat are also embarked on the carrier.

To command any warship is a privilege but to be able to command HMS Queen Elizabeth during this pivotal phase of her capability development is a real honour. In addition to my core ship’s company, the fixed and rotary wing air assets, enhanced medical capability, Royal Marines and other force elements from across Defence will enhance HMS Queen Elizabeth and the UK’s Carrier Strike capability on this deployment.

WESTLANT 19 is a hugely exciting deployment and as we increase the scale and complexity of our training and testing, so the potency of this extraordinary ship continues to grow.

The success of last years’ deployment during which we embarked and operated the F-35B for the very first time put us ahead of the curve in terms of developmental testing between the jets and ship. We have a significant switch in focus this year, towards operationalising this national defence capability; turning this ship, the jets for which it has been built and all supporting units into a cohesive, agile, efficient force.

Whether that’s warfighting at one end of the scale, peacekeeping at the other end or delivering humanitarian support across the globe. Our first operational deployment in 2021 is not far away and we will be ready for any eventuality.

HMS Queen Elizabeth will also host the second Atlantic Future Forum during her time in the US, following on from the inaugural forum held last year in New York. The forum provides a platform for innovators, business leaders and tech entrepreneurs across government and industry to explore emerging cyber, artificial intelligence and space trends, technologies and threats.

The ‘WESTLANT 19’ Strike Group will return to the UK at the end of the year. HMS Queen Elizabeth’s sister ship HMS Prince of Wales is in her final stages of build at Rosyth Dockyard. She is expected to commence her sea trials in the coming weeks.

HMS Queen Elizabeth sails to US for fighter jet trials