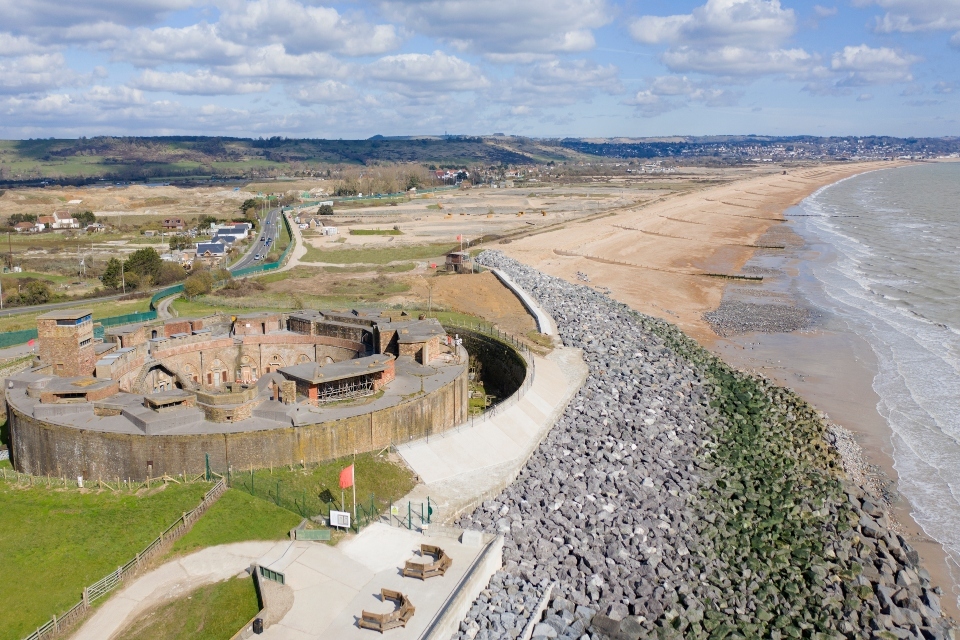 With the scheme’s completion, 787 properties are now better protected from tidal flooding for the next 100 years, taking into account climate change and sea level rise.

Also better protected with the scheme’s completion is the Ministry of Defence (MoD) firing ranges that provide a critical resource for the army and the country’s security.

The Hythe Ranges scheme represents a £25m investment, delivered in partnership with the MoD. The event was officially opened by Dr Martin Hurst, Chair of the Southern Regional Flood and Coastal Committee (SRFCC).

The ceremony included the first public viewing of a video about the scheme and its construction. The video can be viewed on the Environment Agency’s YouTube channel

Construction at the site

Work started in spring 2020 and was successfully and safely completed during the Covid-19 restrictions. Due to the rigorous health and safety measures applied, the site did not have a single positive test of Covid-19.

This work to the beach and groynes will reduce the risk of flooding from the sea. The rock revetment helps shield the Grand Redoubt and merges with the existing Dymchurch seafront.

A number of environmental features were introduced as part of the scheme such as the creation of over 70 rock pools in the rock revetment. Benches made from recycled wood and an information board have also been installed on the Dymchurch promenade for the public to enjoy.

The climate crisis is a major threat to world security but our preparations will be made locally with communities and with partners, so it’s fitting we’ve worked with the military and Natural England on the Hythe Ranges sea defence scheme.

This project represents our largest volume of low carbon concrete used in a flood defence scheme, which helps us protect people from climate shocks and reduces our carbon footprint at the same time. As the country heads towards net zero, I predict the whole construction industry will at some point switch to low carbon concrete, this scheme has helped speed that up.

With the COP26 climate talks coming to Glasgow this year, examples like Hythe show what adaptation means in practice.

We are extremely proud to have been a part of this fantastic project. By working closely with the Environment Agency and Natural England we have been able to protect properties, our military Ranges and several important wildlife habitats in this beautiful and historic area for many years to come.

Romney marsh is one of the real treasures of the south coast. It contains 14,500 houses, 700 businesses, 25,000 hectares of grazing land, nationally important infrastructure and high-class nature – much of which lies below the high water level. It is our job and our privilege to defend this area from flooding.

The Hythe ranges scheme is an essential part of our defences, continuing the £155m already spent on defending the marsh. Further defence improvements will follow soon at Lydd ranges and on the Rother tidal walls.

I would like to pay tribute to all those involved in completing the Hythe ranges scheme, working through the Covid 19 epidemic. It is the result of genuine partnerships between the Environment Agency, local councils and communities, the MoD and contractors – and partnership is what my Committee is all about.

We cannot and should not always seek to defend against the sea. But the case for defence here is unanswerable, and I was hugely proud to be asked to open this scheme.

Thank you to our partners, the Ministry of Defence (MoD) and Natural England for their co-operation in enabling us to complete the works on schedule.

It represents a key stage in the Folkestone to Cliff End Strategy leaving us ready for the next step at Lydd Ranges where again we will work closely with the MoD.

By completing this scheme in February we were able to meet our regional target ahead of schedule. Thus contributing our share of the overall Environment Agency target of 300,000 homes better protected target which we set in 2015.

We would like to thank our staff and contractors Van Oord for carrying out this critical construction during the coronavirus outbreak. They followed guidance from Public Health England to work safely on construction sites. The safety of our staff, partners and the communities we work is always our priority.

Nationally, work is also already under way on the delivery of some of the 2,000 new flood and coastal defences that will better protect a further 336,000 properties from flooding and coastal erosion by 2027, which will also see the implementation of the Environment Agency’s Flood and Coastal Risk Management Strategy.

Alongside building new defences, the strategy sets out how the Environment Agency and partners will work to make communities more resilient to the effects of climate change, ensuring they are better prepared for when flooding sadly hits, and able to recover quickly. It will also ensure a greater use of nature to reduce flood risk.

The project team worked within government and Public Health England safe working guidelines with strict attention to social distancing and cleaning. The safety of staff, partners and the local community is always given priority.

The project started and finished during the Covid-19 pandemic, and delivered the scheme in a safe manner with no incidents of Covid-19 on site.

The Hythe Ranges Sea Defences Scheme forms part of the Folkestone to Cliff End Strategy (FoCES) approved by DEFRA in 2010.

The Folkestone to Cliff End Strategy (FoCES) was approved by Defra in 2010. It sets out our plans to manage flood and erosion risks along the Romney Marsh coastline over the next 100 years, taking the predicted impacts of climate change into account.

Much of Romney Marsh is below the present day high tide level, and 14,500 homes, 700 businesses and nationally important, critical infrastructure are at risk of flooding. The strategy identified how we can improve the existing defences to reduce flood risk to Romney Marsh to a 0.5% chance in any year.

The Hythe project achieved efficiencies of over £2.5 million and more than 1,660t CO2e savings including:

The project included environmental enhancements which encourage intertidal habitat to develop. These included:

The foreshore fronts a critical training facility for the Ministry of Defence. This required working closely with the MoD to minimise disruption and ensure works were aligned to the needs of the MoD.

The project secured 25% partnership funding from the MoD which has contributed towards the capital delivery as well as future maintenance costs.