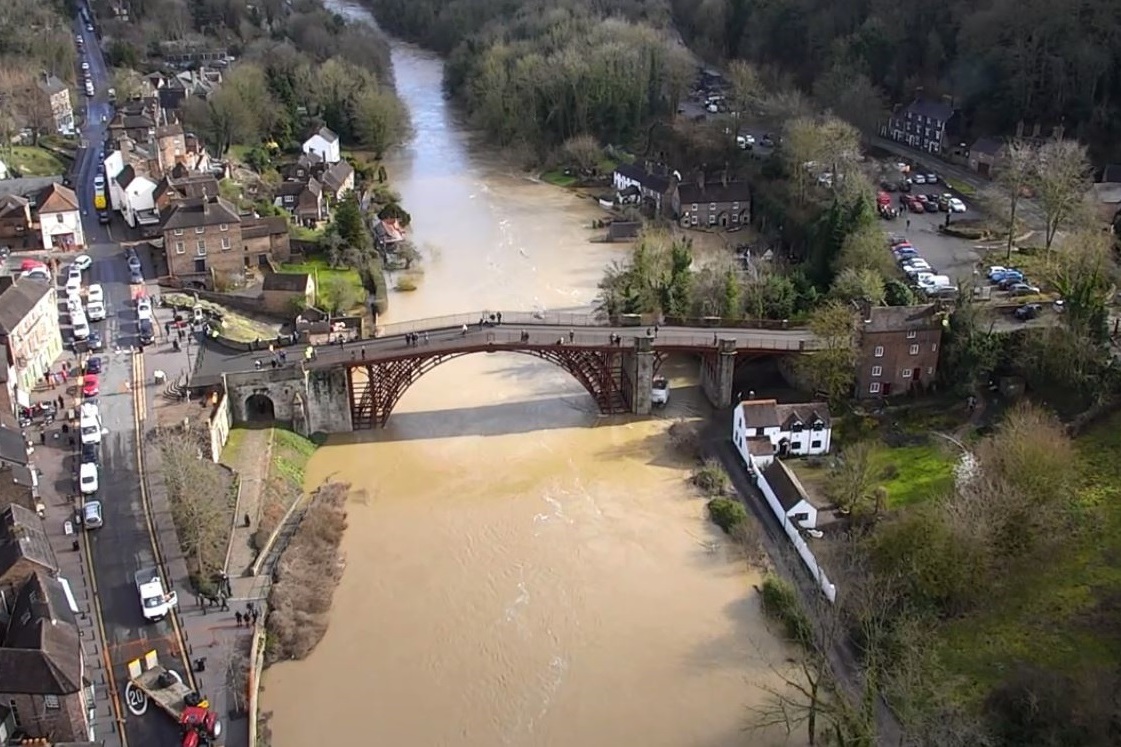 Ironbridge in Shropshire has been made more resilient to flooding following a review of the issues faced in the February 2020 floods.

The review has led to improvements to the method of deploying the town’s temporary flood defence scheme.

The new method was put to the test before Christmas when the Environment Agency erected the flood defence due to the high river level and the flood warnings that were in place. The barriers were taken down on 29 December, once it was safe to do so.

To further reduce the risk of flooding from the River Severn, work to the road surface by Telford and Wrekin Council will improve the ground conditions for the temporary flood barrier that is deployed in the event of flooding, and ensure it does not move.

The work by Telford and Wrekin Council is due to start on 18 January 2021 unless adverse weather dictates otherwise. Road closures will be in place until the work is due for completion on 7 February 2021.

In the floods of February 2020, Ironbridge experienced the highest river levels since the year 2000. Numerous flood warnings, including two severe flood warnings, were issued for the River Severn at the Wharfage, Ironbridge, and Environment Agency temporary barriers were deployed.

Despite the prolonged high river levels, the barrier continued to hold back the river levels. Once the levels had peaked, Environment Agency staff completed repairs to the damaged barrier to ensure it provided protection over the following weeks.

While the temporary flood barriers at Ironbridge continued to be operational and properties were defended in the February floods, we have reviewed and improved their method of deployment, which we adopted in the e******n of the barriers in December.

These measures include the way we put the barriers in place to allow for a wider waterproof membrane to the front of the barriers, which increases protection. We have also reviewed how we can make them even better secured, particularly around trees; and how the road can be adapted to reduce the chance of movement of the barrier.

Changes have also been made to the deployment plan that the Environment Agency and Telford and Wrekin Council follow in putting the barrier in place and we will increase the time needed to fully install the barrier to allow for the additional work.

Since the floods last winter, we have done a lot of work with the Environment Agency to produce this bespoke and innovative road design specifically for Ironbridge. Many surveys were done by both our organisations, leading to 3D designs and investigative work on how we can minimise the risk of the flood barriers being moved again by force of a flooded River Severn. It led to identifying new ways for the Environment Agency to put the barriers in place, especially around trees.

The Wharfage will be resurfaced by Telford and Wrekin Council’s highways contractor Balfour Beatty with a new material to improve friction. When laid, the new road surface will be designed flatter and slightly sloping towards the river to further reduce the risk of any slippage by the barriers.

We are now turning those designs into reality as quickly as we can and that is why this work is being done during the winter. I would like to reassure residents and businesses in Ironbridge that there are contingency plans in place to deal with any increase in the river level; plans which we already put into practice last month. It is important to note that is impossible to completely eliminate flood risk, however we are doing everything we can to minimise that risk.

Check online if your property, business, or place of work is within a flood warning area or call Floodline on 0345 988 1188.

Environment Increasing the level of coordination in offshore e…
0
✖