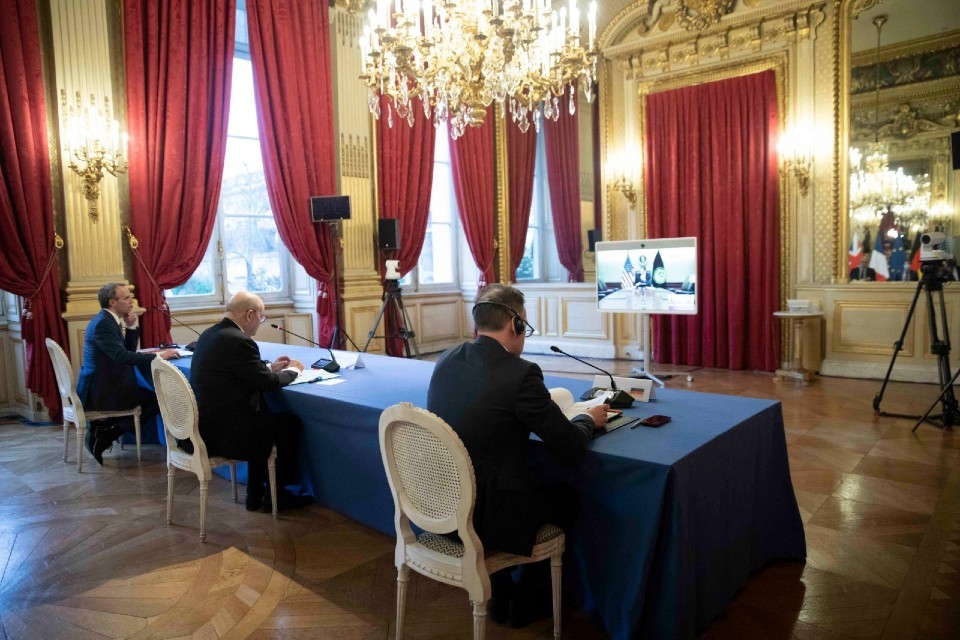 Statement by the foreign ministers of France, Germany, the United Kingdom and the United States of America:

The Foreign Ministers of France, Germany, the United Kingdom and the US Secretary of State held a virtual meeting, for the second time in this format since Secretary Blinken took office, to discuss Iran and other pressing issues. They reaffirmed the centrality of the transatlantic partnership in dealing with the security, climate, economic, health and other challenges the world faces.

Regarding Iran, the E3 and the United States expressed their shared fundamental security interest in upholding the nuclear non-proliferation regime and ensuring that Iran can never develop a nuclear weapon. In this context, the conclusion of the JCPoA was a key achievement of multilateral diplomacy. The E3 welcomed the United States’ stated intention to return to diplomacy with Iran as well as the resumption of a confident and in-depth dialogue between the E3 and the United States. The Ministers affirmed strong interest in continuing their consultations and coordination, including with China and Russia, on this key security issue, recognizing the role of the High Representative of the European Union as Coordinator of the Joint Commission.

In this context, the E3 and the United States called on Iran not to take any additional steps, in particular with respect to the suspension of the Additional Protocol and to any limitations on IAEA verification activities in Iran. The E3 and the United States are united in underlining the dangerous nature of a decision to limit IAEA access, and urge Iran to consider the consequences of such grave action, particularly at this time of renewed diplomatic opportunity. They reiterated their full support for the professional and impartial role of the IAEA and its Director General and their efforts to implement the necessary verification and monitoring of Iran’s nuclear commitments under the JCPoA.

The E3 and the United States also expressed their shared concerns over Iran’s recent actions to produce both uranium enriched up to 20% and uranium metal. These activities have no credible civil justification. Uranium metal production is a key step in the development of a nuclear weapon.

The E3 welcomed the prospect of a US and Iranian return to compliance with the JCPoA. The E3 and the United States affirmed their determination to then strengthen the JCPoA and, together with regional parties and the wider international community, address broader security concerns related to Iran’s missile programs and regional activities. The E3 and the United States are committed to working together toward these goals.

The Ministers also called on Iran to release all our arbitrarily detained nationals and reunite them with their families. They also expressed deep concern about the continuing grave human rights violations in Iran.

The E3 and the United States look forward to engaging with partners in order to work together toward these key objectives.

They expressed their joint determination to work toward de-escalating tensions in the Gulf region. They stressed in particular the urgency of ending the war in Yemen, while reaffirming their steadfast commitment to the security of their regional partners. On Yemen, the Ministers agreed to work closely together to support United Nations Special Envoy Griffiths’ efforts to end the war and to address the humanitarian crisis. They expressed concern about the recent Houthi offensive against Marib and strikes against civilian infrastructure in Saudi Arabia, calling upon the Houthis and all Yemeni parties to engage constructively in the political process.

Discussing the evolving challenge posed by Daesh, ministers re-committed to continuing critical efforts to target and eliminate the Daesh threat in Iraq and Syria, including efforts via the 83-member Global Coalition to Defeat Daesh. They also emphasised the growing importance of coordinating efforts to target the threat posed by Daesh branches and networks worldwide.

The Ministers agreed to closely coordinate to address the global challenges posed by China, as well as the need for cooperation across a range of issues, including climate change.

On Myanmar, they condemned the military coup. They called on military leaders to immediately end the state of emergency, restore power to the democratically elected government, refrain from violence, release all those unjustly detained, and respect human rights and the rule of law.

The Ministers agreed on the importance of further strengthening NATO and ensuring it is positioned to address today’s strategic realities, building on the NATO Reflection Group’s recommendations.

Ministers agreed that strong international and multilateral cooperation was essential to ending the COVID-19 pandemic and building back better collectively. They reviewed efforts on the global response, including support for rapid deployment of vaccines globally, primarily through the ACT-A/COVAX facility.

They agreed to work with urgency to address the climate crisis ahead of the 26th UN Framework Convention on Climate Change Conference of the Parties in Glasgow in November. They agreed that significant collective action was needed to implement the Paris Agreement, including keeping a 1.5 degree Celsius temperature rise within reach. They looked forward to the upcoming U.S.-hosted Leaders’ Climate Summit as an important forum for enhanced climate ambition.

Iran and other international issues: statement from E3 and the United States, February 2021

International Affairs Statement by the Foreign Ministers of France, Germ…