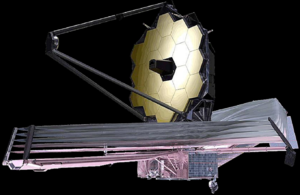 The UK in the James Webb Space Telescope

Looking back in time

NASA’s James Webb Space Telescope (JWST) will look further back in time than any other telescope – to 400m years after the Big Bang. JWST is a collaboration between ESA, NASA and the Canadian Space Agency, due for launch in late 2021 as the replacement for the Hubble Space Telescope.

The four key goals of the JWST are:

These goals can be accomplished more effectively by observation in near-infrared light rather than light in the visible part of the spectrum. For this reason, the JWST’s instruments will not measure visible or ultraviolet light like the Hubble Telescope, but will have a much greater capacity to perform infrared astronomy.

JWST will also study the atmospheres of exoplanets identified by the European Space Agency PLATO science mission – necessary to understand their potential for hosting life. Securing a leading role on this prestigious NASA mission ensures that UK scientists remain at the forefront of global space science research. As the successor to Hubble, Webb is expected to generate even more astonishing images of our Universe, inspiring the next generation of UK researchers and engineers.

What will the JWST do?

To study these distant objects the telescope will use infrared light and must be cooled to within a few tens of degrees above Absolute Zero or -273°C. This is to prevent radiation from the telescope and its instruments swamping the astronomical signals. To achieve this Webb will have a huge multi-layer sunshield which is the area of a tennis court.

The below time-lapse video reveals NASA’s James Webb Space Telescope is now a fully assembled observatory and is accomplishing large-scale deployments and movements that it will perform while in space. (Credit: NASA Goddard)

To capture the very faint signals Webb’s main telescope mirror is 6.5m diameter, the largest ever flown in space and is gold-coated to optimise its ability to reflect infrared light. Its 18 segments will fold up inside the rocket for launch, then unfold in space.

The UK leads the European Consortium to build the Mid InfraRed Instrument (MIRI). MIRI will ‘see’ faint infrared (IR) light invisible to the human eye and will peer far into the past observing very distant galaxies and newly forming stars and planets. MIRI uses IR because unlike visible light, it can penetrate the dense dust clouds which surround newly forming stars and planets.

The UK provided the scientific leadership on MIRI and the instrument design and managed the overall project. The UK was also responsible for the overall construction of the instrument and the quality control to ensure that MIRI would operate as intended and cope with the harsh conditions of space.

MIRI was the first instrument to be delivered to NASA, in May 2012. Since delivery, it has been integrated and tested with the other science instruments and the telescope.

MIRI was built for ESA by a European Consortium of 10 countries, led by Principal Investigator Prof Gillian Wright at the Science and Technology Facilities Council’s UK Astronomy Technology Centre. The European Consortium works in partnership with a team at NASA’s Jet Propulsion Lab, who have contributed the detectors and cryo-cooler for MIRI.

The UK (UK Space Agency since 2011 and STFC) has invested almost £20M in the development phase of MIRI and has continued to support essential post-delivery testing, integration, calibration and characterisation activities by the UK MIRI team at NASA’s Goddard Space Flight Centre, Johnson Space Centre and more recently at prime contractor Northrop Grumman in California. This work is critical to understanding the instrument behaviour in operations and optimising the interpretation for the science data which will eventually be returned from the mission.

Other UK institutes involved in MIRI are:

A full list of people from across the UK that are playing an active role in the JWST can be found on this page.

In March 2021 Space Telescope Science Institute (STScI) announced the selected JWST General Observer programs for Cycle 1. The selected proposals were prepared by more than 2,200 unique investigators from 41 countries, including 43 US states and territories, 19 ESA member states, and 4 Canadian provinces. More detailed information about the approved proposals can be found here.

Due to impacts from the ongoing Coronavirus (COVID-19) pandemic, as well as technical challenges, the launch of the NASA/ESA/CSA James Webb Space Telescope on an Ariane 5 rocket from Europe’s Spaceport in French Guiana is now planned for no earlier than 25 December 2021.