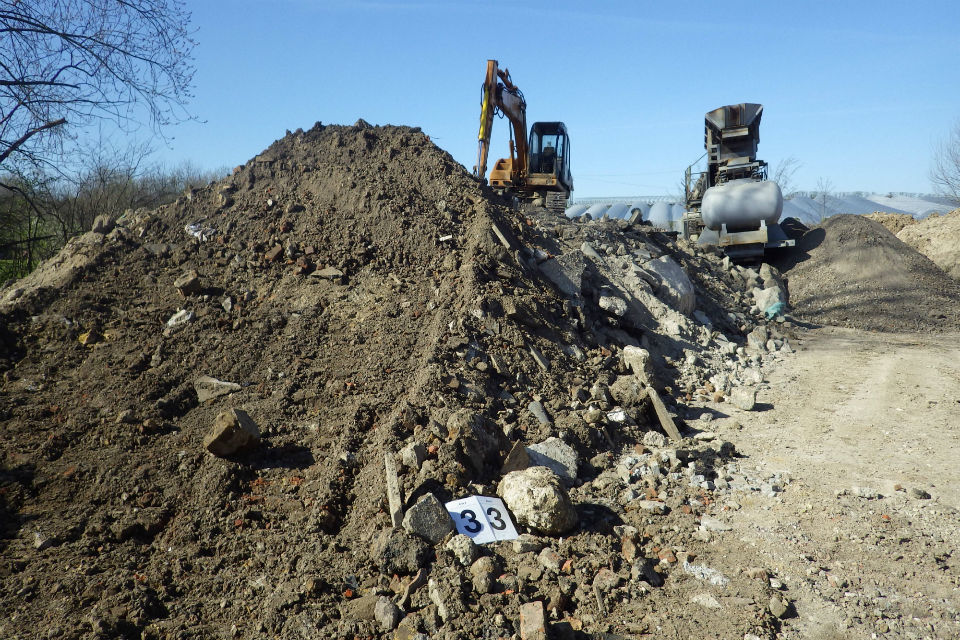 A woman from Kent whose family business was running an illegal waste operation has been given a total of 30 weeks’ custodial sentence. Lucy Mete, 26, helped her father and sister run the operation for two years at their farm near Faversham.

The Environment Agency prosecuted James Mete and his daughters, Lucy and Billie Mete, after obtaining evidence that 135 lorry loads of soil and builders’ waste were dumped and treated at Thirwell Farm in Drove Lane, Hernhill, between 2014 and 2016. The work needed an environmental permit, which it didn’t have.

Following a 6-day trial at Maidstone Crown Court in March 2019, a jury found James Mete, Lucy Mete and Billy Mete guilty of breaking environmental law. All 3 did not appear at court for sentencing.

At this hearing in January 2020, the court heard Lucy Mete, 26, owned part of Thirwell Farm, allowing her father, James, 56, of the same address, to use the farm to deposit and treat the materials against the law. Lucy Mete was given a 26 weeks’ custodial sentence for 1 count of breaching Environmental Permitting Regulations (EPR) 2010 regulation 12 and 38(1)b EPR 2010. For failing to appear at court for sentencing, she received 4 weeks’ custodial sentence; both to be served consecutively for a total of 30 weeks.

A warrant remains in force for the arrest of James Mete for failing to attend court for sentencing last March.

This was a deliberate breach of the law. James, Lucy and Billie Mete all knew their actions amounted to a criminal offence, but still allowed waste to be dumped, kept and treated at Thirwell Farm for a number of years with no permit from the Environment Agency.

The Metes’ illegal activity affected the public’s enjoyment of the area, as a footpath ran through the site.

To help us take enforcement action, like we have in this case, we encourage legitimate waste operators and the public to report any suspicious waste operations on 0800 807060.

In April 2015, officers from the Environment Agency and Kent Police raided Thirwell Farm following a number of reports of waste being tipped there. Officers found many large piles of waste soils and rubble, as well as machinery for processing it. During the visit, environment officers turned back a lorry that had arrived to tip waste. During the trial in March 2019, the court heard from an expert witness that the volume of materials on the site had increased by over 40,000 cubic metres between January 2011 and September 2015. This equates to roughly 53,000 tonnes of material.

Both the lorry driver and the owner of a building supplies firm gave statements to the Environment Agency, saying James Mete was their main contact at the farm, despite him saying in interview he didn’t encourage firms to drop waste there.

On 10 July 2019, Lucy’s sister Billie Mete was sentenced to 6 weeks in prison, suspended for 2 years. She was also given 28 days in jail for breaching the terms of her bail by not attending court for sentence in March, but walked free from court having already served more than half this amount.