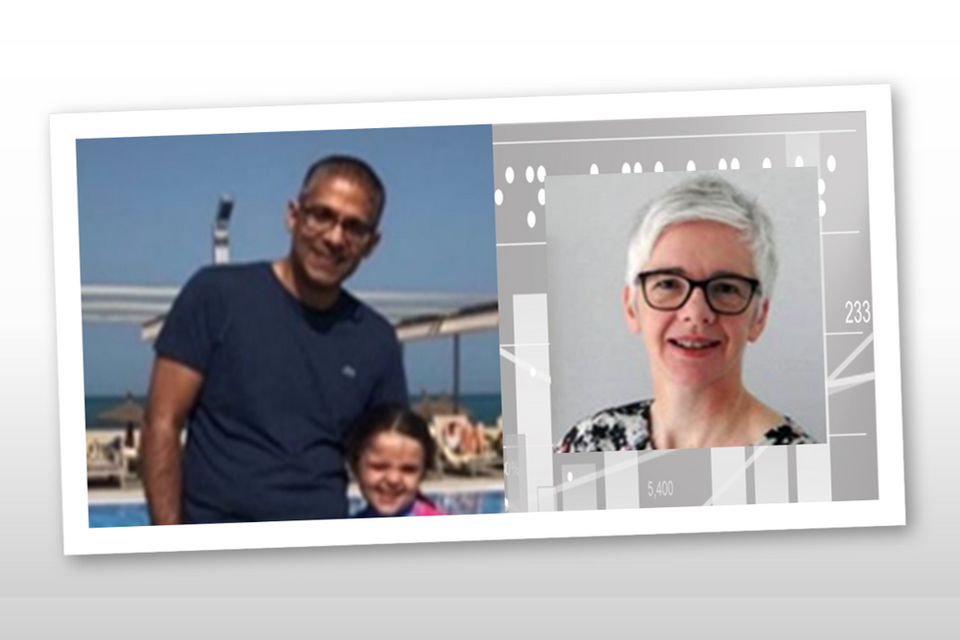 Tell us a bit about your career. How did you get to your current role?

Aakash: My Civil Service career began in 1999 as a temporary statistical officer in HM Treasury (HMT) in the tax policy team. I then moved to the Analytical Division in HM Customs and Excise, now HM Revenue and Customs (HMRC) where I’ve spent most of my career.

I was promoted to Grade 6 in 2014, joining Corporate Finance as head of HMRC’s performance reporting team, responsible for performance data on the Department’s Key Performance Indicators. I joined the Senior Civil Service (SCS) in 2017 on temporary promotion as Head of the Performance and Risk team, taking the role permanently in 2018.

Recently, I’ve supported the Exiting COVID-19 Programme, helping the board understand the lessons learned from our response to the pandemic and the implications for HMRC’s future operations.

Jane: I joined the Civil Service nearly 30 years ago as a recent graduate on the Government Statistical Service (GSS) Fast Stream. My first role was as an Assistant Statistician in the Scottish Office and I then moved to the Department of the Environment (as it was previously called) where I had several roles in statistics and social research.

I transitioned into a Grade 7 role working on social surveys and surveys of housing conditions but was aware that my experience was all in social statistics, rather than economics. I made the conscious decision to move to a role in the Inland Revenue (now HMRC) to gain different experience.

I was promoted to the SCS in 2002. When HMRC formed in 2005 (merging the Inland Revenue and HM Customs and Excise) I helped to build a multidisciplinary analytical team for the new department. In 2011 I moved into an operational role, working on tax compliance for large businesses, where I focused on ensuring that the team was utilising data efficiently. I now manage a team of roughly 500 people as Director of Knowledge, Analysis and Intelligence.

Are there any defining moments that stand out as having made a real difference to your career trajectory?

Aakash: I developed a resource allocation model to support HMRC’s Spending Review 2010 reinvestment package to help secure over £900m reinvestment. This role gave me considerable exposure to SCS discussions as a Grade 7 and huge insight into what leaders really need from analysts.

There were times when others pushed me to progress. A former colleague encouraged me to find a role that would demonstrate my wider capabilities. I reached out to Jane, who was working in an operational area of HMRC and offered me a role in her team (provided I didn’t wear shorts – something I was known for at the time!). This was the best sideways move I’ve made as only eight months later I was promoted to Grade 6.

Jane, and Jon Thompson (former HMRC Chief Executive Officer) were two leaders that showed real confidence in me. I never thought I’d reach Grade 7, so when I was recommended for, and secured, my first SCS position I was shocked. It’s hugely important for leaders to visibly support their team members to progress.

Jane: When I joined the Inland Revenue it was a very different working environment to what I had experienced previously, and I didn’t really like it. I quickly learnt to get stuck in and seek more information to improve my wider understanding. Through perseverance I was able to demonstrate that I was capable and helped colleagues to recognise the value of thinking about their analytical requirements more strategically.

Like Aakash, I was fortunate that senior leaders encouraged and pushed me to believe in myself, particularly during my transition from Deputy Director to Director. At other times, knockbacks triggered me to consider moves. After an unsuccessful promotion application, I explored other routes. I took a move to outside the analytical field within HMRC and gained a lot from this experience. There are huge benefits of moving between teams and roles to gain experiences that broaden your horizons and allow you to understand the wider picture.

What advice would you give an analyst looking to develop and progress in the Civil Service?

Aakash: Consider roles that aren’t purely analytical. As analysts we can offer invaluable input in other ways. We often find ourselves immersed in technical detail and forego softer skills. As you progress, technical skills often take precedence and there are fewer available analytical roles.

Personally, I have a broader set of softer skills and by moving into a different type of role I was able to use these alongside my technical skills to secure a Grade 6 role. I’m lucky to work in a department that has varied opportunities, from operational delivery to policy and some of the biggest transformation programmes in government. It is possible to stay in one department but if the opportunities don’t exist, be brave enough to move.

Jane: It’s true that non-technical skills become more important as you progress; for example, excellent people leadership skills are vital at Grade 6 and above. Considering roles outside your analytical profession will expand your skillset and open the door to more opportunities. You’ll gain valuable insight into bigger picture strategic thinking, which will ultimately make you a better analyst and help you to progress within your profession too if that’s the path you want to follow.

It’s also important to remember that sometimes you will fail. Not all projects, ideas or job applications are successful and determination, more than anything, is vital. That said, if you aren’t receiving sufficient support through your line management chain it’s important to ask for it. If you don’t know anyone working at a higher grade within your profession or directorate, reach out to a confidante outside of those areas.

There are multiple opportunities for mentoring across departments, professions and functions or, if you have a mentor in mind, approach them – I guarantee they’ll be flattered and most will try to help in any way they can!

What does a truly inclusive working environment look like to you?

Aakash: A truly inclusive environment needs to go beyond ensuring we have the right number of people that tick boxes, whether ethnicity, gender or other under-represented groups. People from all backgrounds can offer a wealth of experience and we should embrace all those unique characteristics to ensure the Civil Service truly represents the population that we are here to serve.

Jane: A truly inclusive working environment to me is one where everyone can thrive, and where we value the different life experiences that individuals bring to our analytical community. At the moment, I am really focusing on how I and my Deputy Directors can improve the support we offer to colleagues from different backgrounds to make sure that everyone has the opportunity to progress in their careers.

What would you like to see discussed at our next Leaders in Analysis event?

We are planning a series of events in the series and would love to hear from you with thoughts and suggestions on what you would like to see us cover. Is there an area of development you would like to know more about or a particular role you would like to understand in greater detail? Contact the team today to share your views analysis.function@ons.gov.uk

Leaders in Analysis – an interview with Aakash and Jane