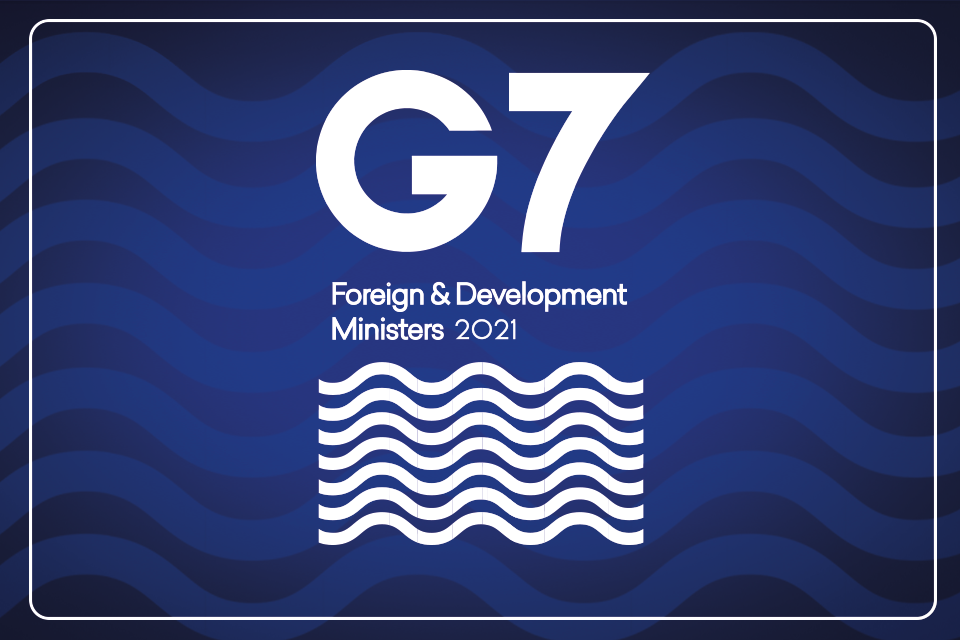 Liz Truss will bring the world’s most influential democracies together in a show of unity against global aggressors this weekend as she hosts the G7 in Liverpool from today (Saturday, 11 December).

The Foreign Secretary will urge G7 Foreign and Development Ministers to present a united front against malign behaviour – including Russian posturing towards Ukraine – and to pledge security and economic support to defend ‘the frontiers of freedom’ around the world.

This call follows pledges by NATO allies to stand up to Russian aggression on the Ukrainian border, warning any incursion by Russia will be a serious strategic error and yield severe consequences.

The meetings today will also include discussion around ongoing crises in Myanmar and Ethiopia, and the Iran nuclear talks, with G7 leaders expected to agree that Iran should stop its nuclear escalation and seize this opportunity to return to the JCPoA.

At the G7 Leaders’ Summit in Carbis Bay, members agreed that to help developing countries close the infrastructure gap, investment must be values-driven, collaborative, and market-led, with a focus on maintaining strong standards, enhancing multilateral finance and fostering strategic partnerships. This weekend’s meeting is an opportunity to build on that commitment.

Liz Truss will push for a common set of standards based on freedom and democracy.

She will talk about the importance of democracies providing more clean and reliable finance for infrastructure and technology projects around the world, offering an alternative to unsustainable debt from non-market economies.

Last month the Foreign Secretary launched British International Investment to boost financing into developing countries across Africa, Asia and the Caribbean, and wants other countries to follow suit.

This weekend the world’s most influential democracies will take a stand against aggressors who seek to undermine liberty and send a clear message that we are a united front.

I want G7 countries to deepen ties in areas like trade, investment, technology and security so we can defend and advance freedom and democracy across the world. I will be pushing that point over the next few days.

In her first major speech as Foreign Secretary at Chatham House in London this week, the Foreign Secretary said “we need to be on the front foot with our friends across the free world, because the battle for economic influence is already in full flow”.

She wants the UK and its partners to offer developing countries more reliable alternatives, when it comes to finance and infrastructure, so they are not dependent on just one country.

She noted that 44 low and middle-income countries have debts to Beijing in excess of 10% of their GDP.

Over the course of the weekend, the Foreign Secretary will hold bilateral meetings with her counterparts from the G7 countries and the EU, as well as guest countries joining the event.

On Sunday, the Foreign Secretary will host plenary sessions on global health security as well as the Indo-Pacific region, with Foreign Ministers from the Association of Southeast Asian Nations joining the G7 Meeting for the first time ever.

The Foreign Secretary will also launch the Africa Resilience Investment Accelerator this weekend. The UK-led initiative brings together G7 development finance institutions to support greater collaboration when investing in Africa’s most fragile markets. It will work to tackle barriers to develop a pipeline of investable opportunities and share best practice and lessons learned from investing in such markets. It will help the G7 to meet its commitment to invest over $80 billion into the private sector in Africa over the next five years to support sustainable economic recovery and growth.

The UK is working to ensure the event in the Museum of Liverpool is Covid secure with all overseas delegates having to take a PCR test before attending. There will also be daily on-site testing.

This is the second in-person gathering of G7 Foreign Ministers this year, following May’s Meeting in London, as part of the UK’s year-long G7 Presidency.