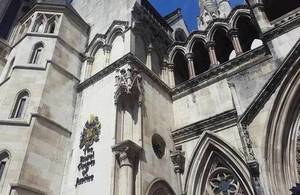 A man who robbed convenience stores in London on six separate occasions has had his sentence increased following an intervention by the Solicitor General, The Rt Hon Michael Ellis QC MP.

David Conteh, aged 22, robbed the stores between 15 and 21 April 2019. Conteh threatened shopkeepers with violence and on one occasion he grabbed a shopkeeper by the throat and struck him on the head with a bottle, before taking cash from the till and alcohol.

During two of the robberies, Conteh took a knife with him and threatened shopkeepers with it.

On 4 December 2019 at the Inner London Crown Court, he was sentenced to 4 years’ imprisonment. That sentence has been found unduly lenient and has been increased to a sentence of 6 years’ imprisonment, following a referral by the Solicitor General to the Court of Appeal.

“The dangerous and violent behaviour of Conteh has caused serious distress to the shopkeepers he assaulted. His sentence has rightly been increased.”

Law Biometrics Commissioner on the police use of live …