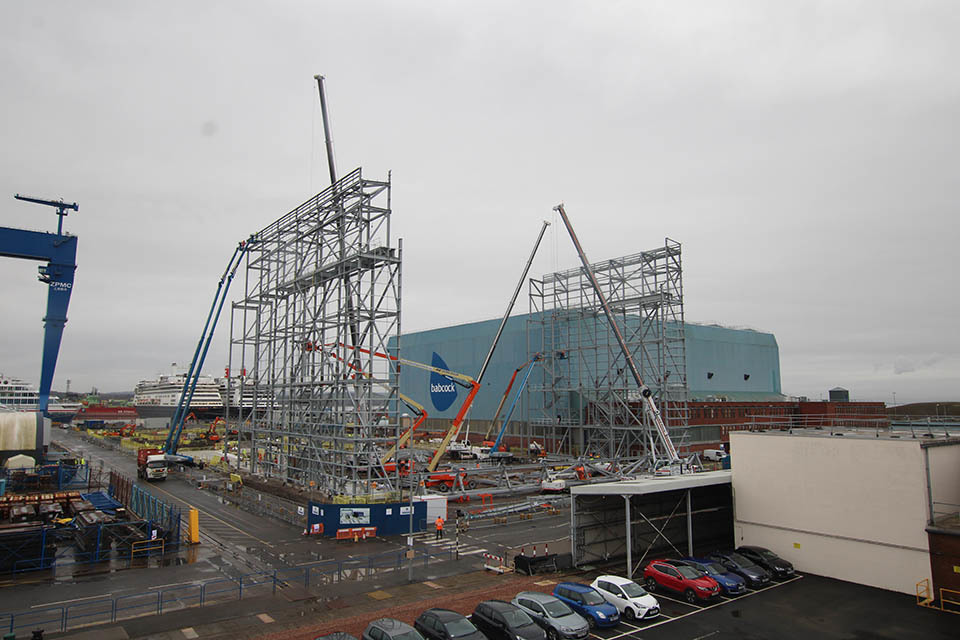 A vast building hall for the Royal Navy’s Type 31 frigates has been welcomed by Defence Secretary Ben Wallace as a major milestone in building the next-generation frigates.

Type 31s, which are being built by Babcock in Roysth, will be the beating heart of the Royal Navy’s surface fleet, deterring aggression and supporting the UK’s national interests across the world.

At 147 metres long, the new hall can comfortably fit three Olympic size swimming pools, and the 30 metre high ‘megadoors’ can accommodate two vessels being assembled at the same time side by side.

The unveiling of the module hall follows the substantial £16.5 billion settlement for defence over the next four years that will modernise the armed forces, reinvigorate the shipbuilding industry and bring jobs and prosperity to every part of the UK.

Defence underpins a wealth of jobs and investment across the entire United Kingdom. Babcock’s ‘frigate factory’ in Rosyth demonstrates the huge footprint of prosperity that defence brings.

This vast industrial facility will see Scottish shipbuilders build our latest warships to take pride of place in the Royal Navy fleet.

Robertson was awarded a £31.5 million contract by Babcock to build the module hall. This project maintained 100 jobs, created five new full-time roles at Robertson and supported a further 100 positions throughout Robertson’s supply chain. The company has also committed significant orders to local Scottish suppliers for the assembly hall build.

Ground-breaking for the new hall commenced in April 2020. The steel structures are now in place in preparation for ship assembly, which will commence in 2021.

Learning lessons from previous programmes to reinvigorate the shipbuilding capabilities at Rosyth, the new hall has state-of-the art manufacturing facilities and new digital systems as well as gantry stair access inside the structure to remove the need for scaffolding. This means personnel will be able to safely access the vessels without leaving the building.

The Type 31 programme employs more than 1,250 people across the UK, which will create a legacy of infrastructure, innovation and skills for the shipbuilding sector. Off the back of the programme, Babcock have also jumpstarted a further 150 apprentice roles to set the sector up for success in the next generation.

International Affairs Israel and Morocco: UK responds to announcement of…
0
✖