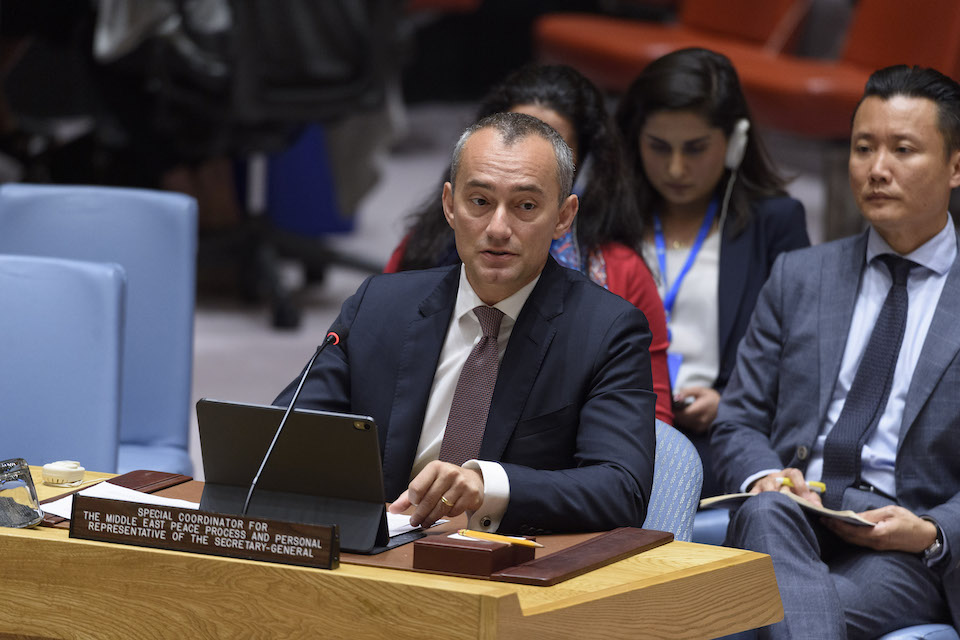 Thank you Mr President. Before I start on the Middle East, could I just say how sorry we were about the terrorist attack on 16 June in Nigeria near Maiduguri which killed at least 30 people. And I think the Council press statement has just issued on that, which is welcome. But our sympathies and condolences to those affected and to Nigeria.

Turning to the Middle East, Mr President. Thank you Mr Mladenov for your briefing. I think some common themes are emerging. For the United Kingdom, we share the Secretary-General’s views on the expansion of Israeli settlements in the occupied West Bank including East Jerusalem. It was disappointing that on 30 May the Israeli authorities published tenders for the construction of over 500 settlement units in East Jerusalem. And that’s a decision that we condemn Mr President.

As others have pointed out the continued escalation of settlement activity in the West Bank and East Jerusalem is contrary to international law as reaffirmed by Resolution 2334. An annexation of any part of the West Bank would also be contrary to international law – not to mention destructive to peace efforts. And I just wanted to set that out clearly.

Turning to Gaza, the United Kingdom condemns the rocket attack by Palestinian militants against southern Israel on 13 June. We strongly condemn all acts of terrorism and we call upon Hamas and other terrorist groups to put a permanent end to their incitement and rocket fire against Israel. We were saddened by reports of a Palestinian medic who succumbed to wounds received last month – when he was hit in the face by a rubber coated bullet at the Gaza periphery. It’s very hard to comprehend, Mr President, the killing of those delivering medical services.

So we’d like to take this opportunity once more to urge all parties concerned to take action to reduce the risk of violence and to make renewed progress towards a long term agreement. It is only through a long term political solution, bringing the Palestinian Authority back to Gaza that communities in Israel and Gaza can be free from the threat of violence.

In response to the fragile humanitarian situation, on 29 May the United Kingdom announced a $2 million package of support for the World Health Organisation. This is to help address the gap in trauma and emergency care in Gaza and will help establish a new limb reconstruction unit. We hope that this package of support will relieve the pressure on Gaza’s hard-pressed health services.

I want to turn if I may to the altercations on Haram al-Sharif/Temple Mount on 2 June. Given the religious importance and the political sensitivity of the holy sites, we look to all parties to maintain the status quo and engage in dialogue to assume a calm, especially during religious observances such as the holy month of Ramadan.

Turning to a solution to the conflict, Mr President, along with other member states the United Kingdom continues to promote a just resolution to the Israeli-Palestinian conflict in line with relevant UN Security Council resolutions. It is our understanding and it seems that the understanding is shared by most Council members that sustainable peace requires: a safe and secure Israel living alongside a viable and sovereign Palestinian state, based on 1967 borders with agreed land swaps with Jerusalem as the shared capital of both states and a just, fair, agreed and realistic settlement for refugees. There need to be security arrangements, that for Israelis: prevent any resurgence of terrorism and for Palestinians: respect the sovereignty ensure freedom of movement and demonstrate that the occupation is over. To this end, Mr President I’d like to take the opportunity to encourage our US colleagues to bring forward detailed proposals for a viable Israeli-Palestinian peace agreement that addresses the legitimate concerns of both parties. We continue to believe that the only way to achieve this is through substantive peace talks leading to a two-state solution.

Mr President there will be a meeting in Bahrain next week about the economic situation and proposals. This is welcome. More needs to be done to enable the Palestinians to trade freely with the rest of the world. This in turn requires greater movement of goods and people and the easing of Israeli restrictions. Ultimately in order for the Palestinian economy to flourish, a political solution to the conflict needs to be found.

Lastly, Mr President, others have mentioned UNWRA. And I would like to reiterate that the United Kingdom also remains a committed supporter of UNWRA and of Palestinian refugees across the Middle East. We welcome UNWRA’s efforts to broaden its donor base. And I’d like to encourage others to step up with more funding and more predictable disbursements. In this context, Mr President, we look forward to a successful pledging conference here in New York next week.

International Affairs Building the peace and stability that Central Afri…

International Affairs Syria: A situation that is accelerating and itR…
0
✖