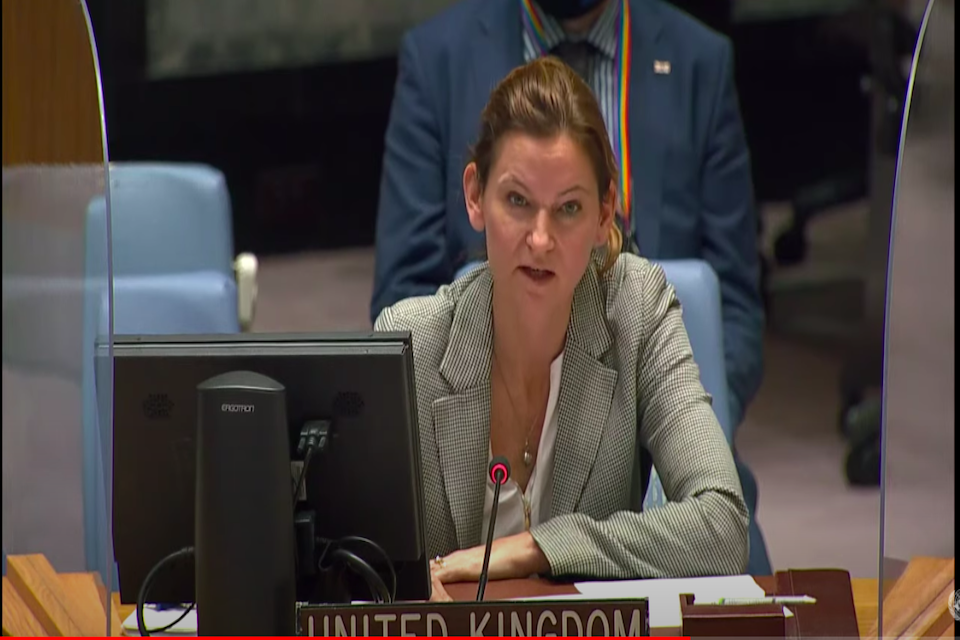 Thank you Madam President and thank you to our briefers USG Lacroix, Special Envoy and His Excellency Thabo Mebki for your insightful updates and reflections, as well as your combined efforts over the past six months to support peace and UN peacekeepers in the region.

Madam President, firstly the United Kingdom joins fellow Council members in condemning the actions of the Sudanese Military this week to detain civilian members of government and dissolve transitional institutions. We call on the military to course correct and release those detained as well as to refrain from violence allow peaceful protest.

The UK welcomes the decision of the African Union this morning which sends a strong message that the Sudanese military cannot subvert Sudan’s democratic transition without consequence.

The United Kingdom is further concerned at the impact these events may have on the situation in Abyei and the already difficult operating circumstances for UNISFA.

This Council has repeatedly welcomed the recent rapprochement between the Governments of Sudan and South Sudan. This welcome shift in bilaterals relations has led to the temporary reopening of border crossing corridors and establishment of free trade zones along the border. We hope that despite the unilateral acts by the Sudanese military in Khartoum, this cooperation will continue.

More broadly while the United Kingdom welcomes efforts to strengthen bilateral relations, it is regrettable that renewed engagement has not translated into tangible improvements in Abyei, where ordinary citizens continue to suffer. We urge both countries to work together to reach a resolution on the final status of Abyei.

Madam President, the United Kingdom remains deeply concerned by the situation in Gok Machar and repeat our condolences at the death of a UNISFA peacekeeper last month.

The members of this Council delivered a unified message on 15 October, reiterating their full support for UNISFA and demanding that the Government of South Sudan facilitate the unimpeded implementation of UNISFA’s mandate.

The situation in Gok Machar is another example of the operational challenges UNISFA continues to face in fulfilling its mandate.

There has been limited progress made on the Council’s repeated requests to facilitate the operationalisation of Antony Airstrip, the issuing of outstanding visa requests, and the appointment of a civilian deputy Head of Mission.
We reiterate our call for both parties to address these longstanding limitations, particularly as we consider the reconfiguration of the peacekeeping Mission in Abyei.

In that regard Mr President, the United Kingdom takes note of the options for reconfiguration proposed in the Secretary-General’s strategic review of UNIFSA.

We commend the men and women of UNISFA for their ongoing efforts to address the evolving security challenges, including the facilitation of community dialogue and local peacebuilding and women’s empowerment initiatives.

The United Kingdom would also like to commend the dedication of Ethiopian peacekeepers in their support to peace and security in Abyei throughout the last decade. It is our sincere hope that the interests of the people of Abyei remain at the forefront of decision-making on the future configuration of UNISFA.

We also call for regional tensions to be resolved through dialogue, and encourage regional partners as well as the UN to ensure current disputes do not damage the effectiveness of UNISFA.

Finally, the United Kingdom urges all parties to fully respect International Humanitarian Law and allow humanitarian actors to deliver aid to those in need in all parts of Abyei, without hindrance.