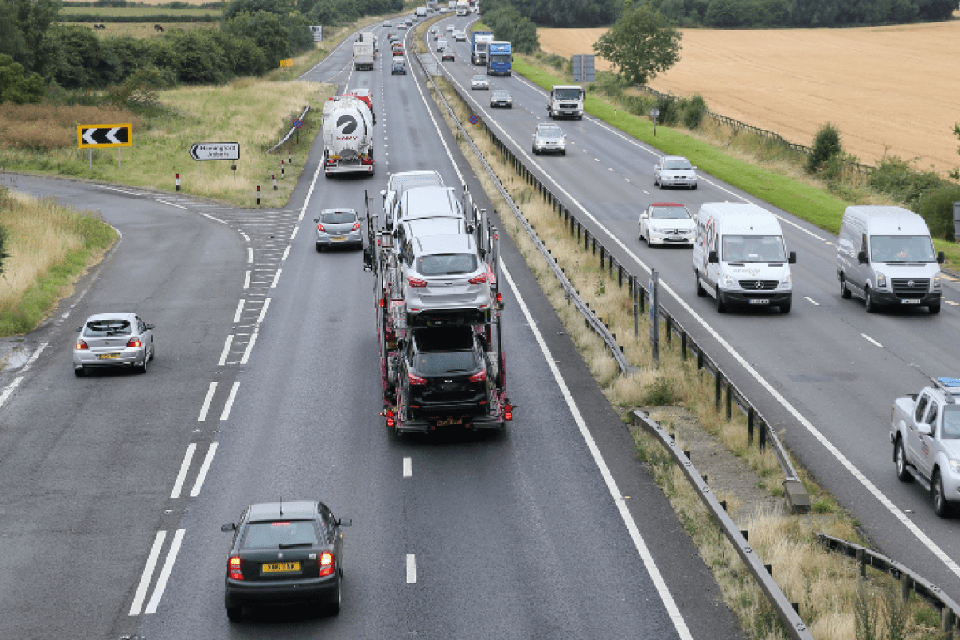 The government will today (10 October 2019) reaffirm its pledge to drive forward an infrastructure revolution with major investment in transport and the roll out of super-fast broadband to rural areas as ministers showcase the benefits of investment already taking place across the country.

Today’s series of visits are highlighting crucial work to increase access to opportunities across the UK and improve journeys for commuters, help the UK’s ports prepare for Brexit and roll out full fibre broadband to every corner of the country.

The Transport Secretary will be visiting Portsmouth International Port to see the crucial infrastructure that has been put in place, and learn how it is preparing for Brexit.

Roads Minister Baroness Vere will be announcing that the biggest road upgrade in the UK – the brand new dual carriageway on the A14 between Cambridge and Huntingdon – will open a year ahead of schedule.

The 12 mile bypass for the town of Huntingdon is part of a £1.5 billion project to upgrade 21 miles of the A14 in Cambridgeshire and will save drivers up to 20 minutes on journeys.

It follows news last week that 18 new road schemes across England have been given the go ahead by the Department for Transport, in addition to the £25.3 billion that has already been committed for investment in the strategic road network between 2020 and 2025.

Financial Secretary to the Treasury Jesse Norman will visit the National Infrastructure Lab in Southampton, a state of the art research and testing facility, helping to deliver infrastructure that cost less, lasts longer, is environmentally sound, and is suitable for the modern world.

This government is determined to deliver an infrastructure revolution. Today is all about highlighting the benefits of work taking place around the country which is improving journeys for passengers, connecting communities and increasing productivity.

This is just the start of our vision to modernise our infrastructure, invest in our transport and technology for the future and level up and unite the whole of the UK.

Transport Minister Paul Maynard will also today visit Leeds station to see upgrade works, part of the record £13 billion being invested by 2020 to improve transport networks in the north.

The government has been clear that it wants to drive growth across the north, including through Northern Powerhouse Rail, giving local leaders greater powers and investing £3.6 billion in towns across England.

And Environment Minister Rebecca Pow will visit one of Europe’s biggest infrastructure projects – the £3.8 billion Thames Tideway Tunnel – to learn how it will help to clean up the Thames.

Recognising that connectivity refers to digital as well as physical infrastructure, the government has also committed £5 billion to support full fibre broadband roll-out to the hardest to reach 20% of the country.

To underline the importance of digital infrastructure, Digital Secretary Nicky Morgan has today announced a new law to make it easier to install gigabit-capable internet connections for the 9 million people living in blocks of flats, where landlords repeatedly ignore requests for access from broadband firms. She will today see how industry are progressing with plans to deliver nationwide gigabit broadband at CityFibre install in Coventry, while Digital Minister Matt Warman will visit a Virgin Media broadband dig in Southampton.

Meanwhile, Exchequer Secretary Simon Clarke will visit Openreach to meet trainee engineers and learn more about the importance of fibre broadband in connecting businesses and homes.

We’re pushing ahead with delivering the digital infrastructure that will underpin the UK’s future growth and boost our productivity.

Every region across the UK has a key role to play in enhancing productivity and prosperity. This government is committed to boosting economic growth, to level up and develop towns and communities across the country.

Ministers from the Department for Education will be making visits to see the pipeline of skills the country will need to support the development of infrastructure in the future.

Schools Minister Lord Agnew will visit Sunderland College to speak to manufacturing, engineering and construction apprentices and Children’s Minister Michelle Donelan will visit New College in Durham, which has close links to the car manufacturer, Nissan.

Today the government also announced £88 million new investment to help close the productivity gap between the UK and major world economies and turbocharge British businesses. The investment will help develop software to harness the power of supercomputers and help kickstart the UK’s largest and most ambitious productivity institute, which will examine how to boost productivity levels across the country.

We’re committed to delivering greener, technologically advanced infrastructure that both connects people across the country and helps in the fight against climate change – making sure the UK continues to be one of the best places to live and do business in the world.

Business Millions set to benefit from faster broadband with…