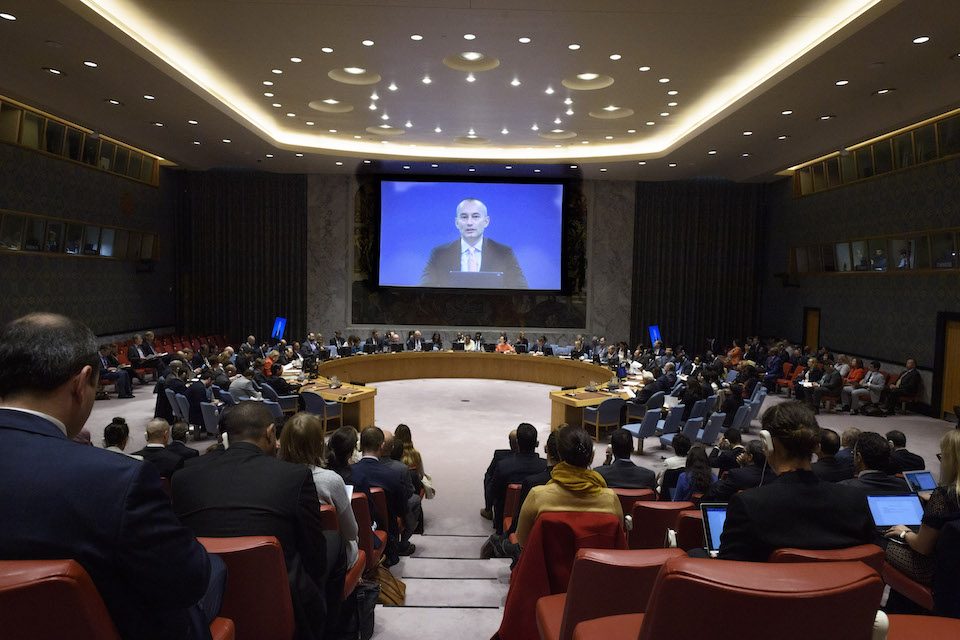 Madam President, the UK remains concerned by the negative trends in Israel and the Occupied Palestinian Territories. We continue to be deeply concerned by ongoing Israeli settlement advancements in the West Bank, including East Jerusalem, in violation of international law. We urge Israel to fulfill its obligations as an occupying power under the Fourth Geneva Convention.

I would also reiterate here the United Kingdom’s position that annexation of any part of the West Bank would be destructive to peace efforts and could not pass unchallenged. Annexation of territory by force is prohibited under international law.

Madam President, we are troubled by the increase in settler violence. Many recent incidents – including assaults on Palestinian farmers, the setting fire to olive trees and stealing of produce – have coincided with the Palestinian olive harvest, which began earlier this month. The Israeli authorities have a responsibility to provide appropriate protection to the Palestinian civilian population.

We are also extremely concerned that the number of structures demolished this year has increased by almost 40 percent compared to the same period last year. We condemn the demolition of Palestinian property and evictions of Palestinians from their homes.

Ongoing and periodic tensions on Haram al-Sharif, or Temple Mount, are a further source of concern. We recognize that Jerusalem holds huge significance and holiness for Jews, Muslims and Christians and reiterate the fundamental necessity of maintaining the status quo at the holy sites.

Turning to Gaza, Madam President, the reduction in violence at the border fence is welcome and we urge continued calm. Indiscriminate attacks against civilians are unacceptable and unjustifiable. Hamas and other terrorist groups must cease all actions which are violent or provocative. The United Kingdom fully supports Israel’s right to defend its citizens from such acts of terror.

I would also like to echo the concern relayed by the special coordinator that Hamas is putting children at risk of violence at the demonstrations at the Gaza fence. Children should never be the target of violence. They must never be put at the risk of violence or encouraged to participate in violence. It is totally unacceptable that Hamas and their operatives have been cynically exploiting the protests for their own benefit. Hamas must cease all actions which proactively encourage violence or which put civilian lives at risk.

The United Kingdom underlines the damage that Israeli restrictions are doing to the living standards of ordinary Palestinians in Gaza. We call on Israel, the Palestinian Authority and Egypt to work together to ensure a durable solution.

Madam President, we welcome the work by the Palestinian leadership towards genuine and democratic national elections for all Palestinians.

Madam President, we need a viable Israeli-Palestinian peace agreement, which addresses the legitimate concerns of both parties. That means we need genuine and committed engagement from both Israelis and Palestinians, including the end of actions which undermine trust and threaten the viability of the two-state solution.

Moving towards viable peace in the Middle East