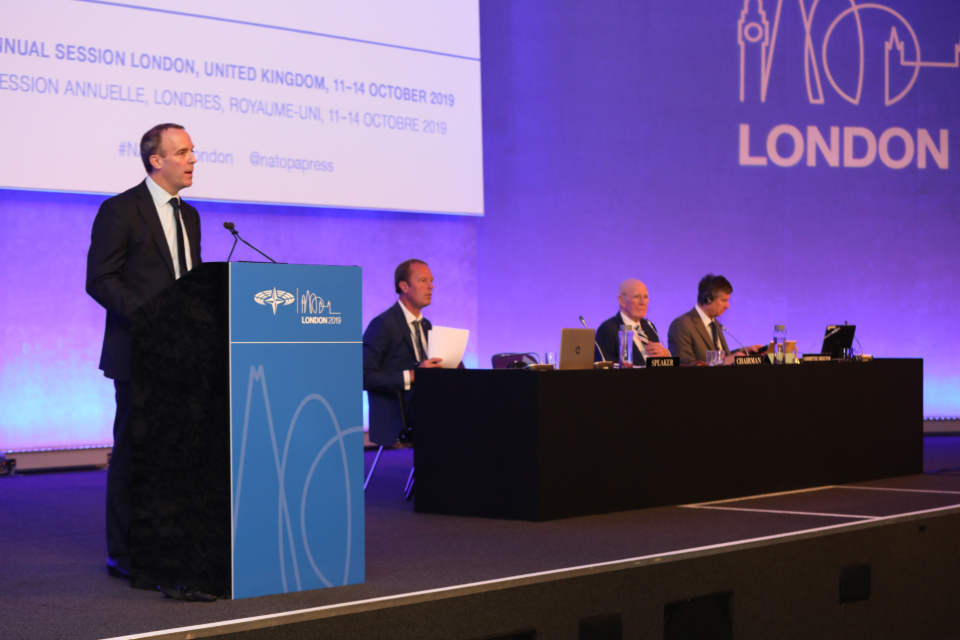 Thank you very much and good morning to all of you as fellow members of the Parliamentary Assembly.

Today, we celebrate NATO’s 70 years of pre-eminence as an alliance founded on creating peace and prosperity for all of our countries. Forged from the ashes of the Second World War, NATO defended its members from the spread of Communism. Today it protects nearly 1 billion people across our 30 countries.

The UK’s commitment to European security has, and will always be, strong and we continue to play a leading role in ensuring the success of NATO. We are, I like to remind everyone, the top defence spender in Europe and the second largest in NATO as a whole.

Every single day, thousands of our Armed Forces personnel serve side by side with those from your countries in our shared endeavours: from troops supporting NATO missions in the Baltics, Iraq and Afghanistan, to ships patrolling the Black Sea and planes policing European skies.

We are proud that nearly 70 years ago, London became the home to the first headquarters of NATO. And we are also proud that, while NATO headquarters may have outgrown its original headquarters in the townhouse less than a mile from here, in the 7 decades since, NATO has achieved its aims of securing peace for a more prosperous world.

Margaret Thatcher said nearly 2 decades ago, “NATO has surely been the most successful Alliance in history.” Her words ring true today. But we also know that the threats aren’t as predictable, and the solutions aren’t so simple as they were in Margaret Thatcher’s day.

The world has moved on since the Cold War. Russia is using different types of disinformation and deploying new missile systems in its efforts to destabilise Europe. Terrorist groups are becoming more capable and more agile. For all of us, new and rapidly developing technologies present a double-edged sword of risk and reward, opportunity and threat.

In the face of these complex challenges, the transatlantic alliance has come under some pressure. But I believe that that should only serve as a clarion call to us to reinforce and recalibrate NATO, so it is well equipped to take on those new threats and rise to the new challenges that lie ahead of us.

NATO is the preeminent organisation that brings us together, Europe and North America, in the pursuit of those shared interests and those common goals and values. So the stronger we are together, the harder we work to avoid division, the more effective we will be.

But I think the same is true in reverse. The more we neglect those ties, the weaker we will be in tackling the challenges that threaten us all. I don’t want to airbrush away some of the differences, on any one or other issue there are and will be between us.

But I hope we will always have the empathy and wisdom to place them in their proper context, set against the far greater challenges and threats we face together, shoulder to shoulder. So let’s cast our eyes beyond relatively minor disputes between us, and towards the growing turbulence I think we can all see on the horizon.

Now, more than ever, our foreign policy should be guided by a clear strategic vision and direction, designed to uphold the rules-based international system, underpinned by unity and shared values of democracy, freedom and the rule of law. We must stand together in defence of the values that set the very foundations of this precious alliance.

And, for NATO to continue to meet the challenges of tomorrow, it must adapt, both geographically and strategically. Above all, we have got to adapt to the threats we face in the here and now, today.

In the last 18 months, we have made good progress. We are thinking in innovative ways about new strategies for air power, maritime posture, countering hybrid attacks, and of course the threat from cyber. We are developing our agility by tripling the size of the NATO Response force, so we can deploy more forces, more quickly, to cover a wider range of threats. We are expanding geographically, deploying new battlegroups to the Baltics and Poland, building defence capacity in Afghanistan, Jordan and Tunisia, and increasing support to Georgia and Ukraine.

But we have also got to face and contend with a more aggressive Russia. One that frankly shows a blatant disregard for rule of law. Let’s remember, just for a moment, these aren’t just mere technical violations of the rules. The Russian state has used force to illegally annex Crimea. It has carried out cyber attacks in Europe. It has sought to undermine European democracy, for example in its failed coup attempt against Montenegro. And this pattern of behaviour shows no signs of abating.

Last year, we in the UK suffered a nerve agent attack in Salisbury, for which Russia bears responsibility. And Russia’s repeated violations of the INF Treaty led to the recent collapse of that decades-old missile treaty.

So I want to be clear about this. We do need an approach that invites the possibility of a better relationship with Russia, if and when Russia shows it is serious, willing and able to cooperate in support of international law rather than undermining it.

We must also, at the same time, be clear-sighted in adapting our deterrence and defensive capabilities to respond to Russia’s patterns of aggression, malign activity and abuse of the international rules-based system.

Now, our more conventional measures include leading a battlegroup in Estonia, increased support to Georgia and Ukraine, and our presence in the Black Sea region. But in this changing environment, we must look to the future, we must change with it. Russia is already exemplifying a novel and innovative cyber threat with their reckless and irresponsible activity.

As colleagues will know, last year, the GRU attempted an attack on the Organisation for the Prevention of Chemical Weapons in The Hague, one of the foundations of the rules-based international order. Thanks to the security partnership we have with the Dutch security service, the GRU was thwarted. But we can never be complacent.

We have long played a leading role in NATO’s cyber adaptation. The UK was the first Ally to offer our offensive cyber capabilities to NATO, and a further eight partners have joined us since. But with developments like artificial intelligence, hypersonic missiles and autonomous weapons systems, there is a potential to change warfare as significantly as flight did more than a century ago, so we need to be able and willing to grasp those opportunities and rise to those challenges.

At the upcoming NATO Leaders’ Meeting in December, we also want to see our allies addressing evolving challenges in outer space, just as it has already done with cyber, and address disruptive, emerging, new technologies.

That Leaders’ Meeting will make sure that we can respond with the strength that we need to the increase of hybrid attacks that, let’s remember, affect the day-to-day lives of our people – whether by compromising their bank accounts or undermining the integrity of our elections and our democratic system.

This potent combination of threats leaves no room for complacency. We have, and we must, call on other countries to step up their contributions to NATO and our collective defence. I recognise and I pay tribute to the progress that has been made on burden sharing. But it’s still the case today that only 8 allies invest the necessary 2% of GDP.

So to you all, as friends gathered here, I urge you, and your legislatures, to put our jointly held principles into practice. NATO ally legislatures can, and should, play a vital role in supporting increases in defence budgets, and stepping up commitments to deployments and greater military co-operation.

It was the former US President, Herbert Hoover, who once said “peace is not made at the council table, or by treaties, but within the hearts of” people. So while we are all here today because of our commitment to NATO, we can’t just rely on treaties to bind us together. Talking about the threats won’t get the job done. We’ve got to act, all of us.

In a fast-changing world, whatever our differences, we must focus relentlessly and consistently on our shared values and our common purpose – upholding peace, prosperity and the international rule of law.

Our hearts must be in this struggle.

So let us reaffirm and recommit to those noble aims today.

Thank you all very much.