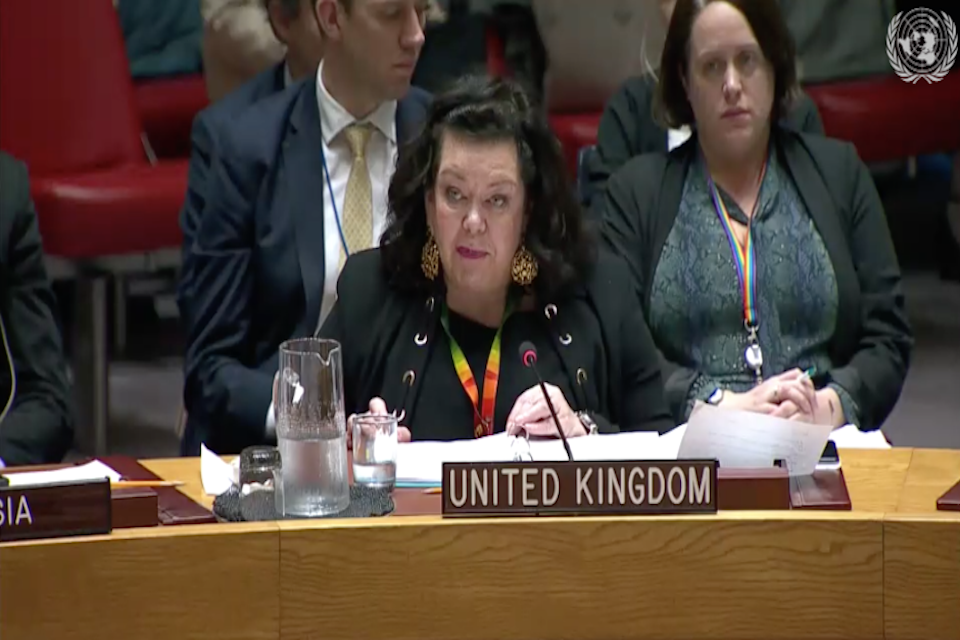 Mr President, as we’ve heard today, the Israeli-Palestinian conflict has blighted an entire region and untold lives. To this day, its implications are felt across the Middle East and around the world. It is almost as old as this Council and has gone on for far too long.

Mr President, the UK’s longstanding position on the Middle East Peace Process is clear and has not changed: we support a negotiated settlement leading to a safe and secure Israel living alongside a viable and sovereign Palestinian state, based on 1967 borders with agreed land swaps, Jerusalem as the shared capital of both states, and a just, fair, agreed and realistic settlement for refugees.

The United Kingdom’s commitment to the resolutions of this Council is unwavering – and we support what the German representative said about Israel’s security.

We need to acknowledge progress towards meaningful peace has stalled. The absence of dialogue risks a prolonged political vacuum that will only fuel instability and extremism.

Israelis and Palestinians deserve better; they deserve a durable resolution that provides all with dignity and security. Palestinians deserve self-determination and freedom from occupation. Israelis deserve to live free of terrorist rocket fire, and a future characterized by fruitful cooperation with their neighbours in the region.

This can only be achieved by finding a path back to negotiations, and securing the settlement that is acceptable to all parties. No other path to peace exists.

It has been over a decade since the last direct negotiations, as we’ve heard today. A resolution of the issue has only become harder. Illegal settlements have expanded. Acrimony between Palestinian factions has deepened. If we try again, only in another half decade, a settlement will be harder still.

Our American colleagues have offered proposals for breaking this deadlock. These represent genuine desire to resolve this conflict. The United Kingdom does not believe these proposals are the end of the road, but we hope that they may lead to a first step. Both Israeli and Palestinian leaders owe it to their people to give them due consideration.

Mr President, let me, if I may, extend the regards of my Prime Minister to President Abbas. President Abbas has long championed peace and dialogue. We have not forgotten.

All of us here today understand that the proposals put forward by the United States may feel very different to what has been discussed before. Time will be needed to digest them, and members of the Council should strive to provide this.

President Abbas has expressed serious concerns with the proposals. That is certainly his right. It is for Israeli and Palestinian leaders to determine whether the plan meets the needs and aspirations of those they represent.

But where there is disagreement, or even outrage, the only path to resolution is dialogue. The US proposals are now on the table. The United Kingdom looks to the Palestinian leadership to offer its own vision for a settlement, and to find a way of re-engaging with the negotiation process so that its concerns can be considered and discussed.

Mr President, let me be clear. Unilateral action by either party is unacceptable. The UK government, including our Foreign Secretary, most recently in his statement on 31 January, has made clear our serious concern about reports of possible moves towards annexation of parts of the West Bank by Israel.

I have said in this Council before, and I repeat, that any such unilateral moves would be contrary to international law and damaging to renewed efforts to restart peace negotiations. We hope that President Abbas returns to negotiations, but if he cannot, that would not justify annexation. Any changes to the status quo cannot be taken forward without an agreement negotiated by the parties themselves.

Let me conclude, Mr President, by reiterating the contention of my Prime Minister and Foreign Secretary. We must now take the first step on the road back to negotiations. There is no other way forward.