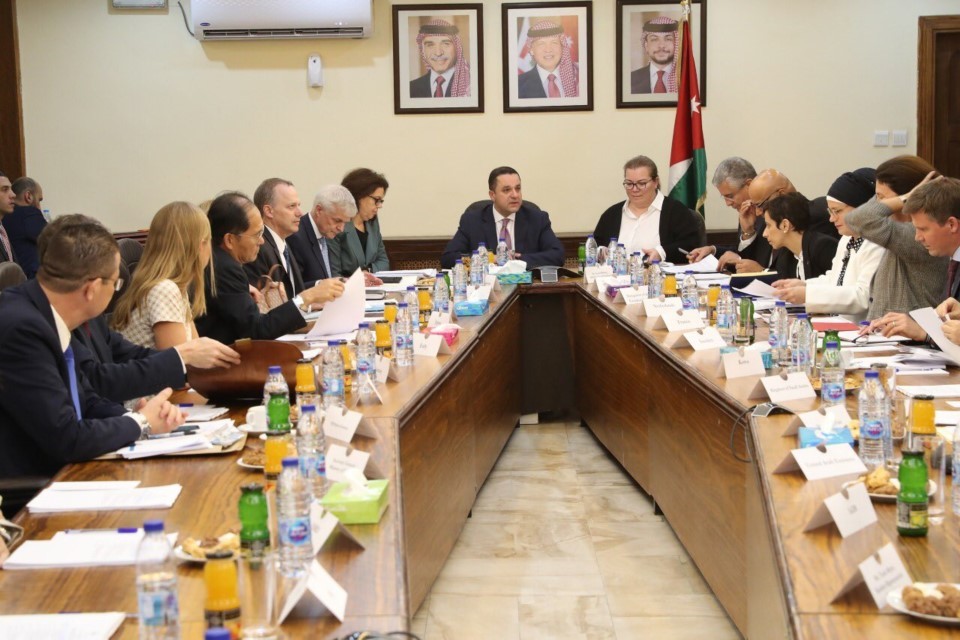 Senior representatives from international donors and financial institutions met with the Government of Jordan in Amman yesterday afternoon for the launch of the Jordan Taskforce, the global coalition led by the Government to support Jordan’s ambitious plans for economic transformation.

Six months on from the high-level conference in London, hosted by the UK and Jordan governments, the Taskforce provided an opportunity for Jordan to demonstrate progress of reforms, and for the international community to report on their support in implementing Jordan’s reform program.

Yesterday’s event was convened by Jordan’s Minister of Planning and International Cooperation and State Minister for Economic Affairs, Dr Mohammad Al-Ississ. The group discussed the challenges and opportunities the Government of Jordan faces in trying to ensure growth and jobs, implement reform, and deliver financial sustainability for the country. Minister Al-Ississ provided an update on the economic situation and progress against the Government’s priorities over the next five years.

The Minister also used the meeting to present a diagnosis of Jordan’s macroeconomic situation, assessment of key risks and opportunities and the path to accelerating growth and job creation, including an overview of financing needs for next year.

Donors responded by setting out their commitments to Jordan and their planned support for the implementation of the key reforms outlined in the country’s Five-Year Reform Matrix.

The Jordan Taskforce was formed at the London Initiative conference in February of this year to provide a robust follow-up mechanism to track and report on progress against Jordan’s reform agenda, and the international community’s support to finance and implement these reforms.

The global coalition of partners will now meet quarterly at working level to ensure regular monitoring of Jordan’s progress, and lay the groundwork for the first six-monthly High-Level roundtable which will take place at the World Bank Annual Meetings in October. The High-Level roundtable will agree priorities based on the analysis of the quarterly meetings to deliver outcomes under the three pillars of the London Initiative; growth and reform, debt sustainability and investment.

Jordan is committed to a path of accelerating growth momentum and job creation. It has successfully delivered reforms to ensure macroeconomic stability and is now keen to leverage that to attract investments and increase exports in both volume and sophistication.

The London Initiative marked an inflection point in this path and the Jordan Taskforce is a key forum to ensure the international community is focused on supporting the reform program that Jordan has developed and committed to.

The London Initiative was an important moment in the UK’s partnership with Jordan and a great opportunity to showcase the country’s potential and attract investment from around the world.

But the conference was just the start. The UK is committed to work with the country in the long term, supporting the government to implement reform and attract investors to help boost its economic growth.

While there is much talk of Jordan’s challenges, including unemployment, debt and the continued impact of the situation in Syria, there are also immense opportunities. This is especially true of the country’s dynamic youth population, Jordan’s greatest asset. The economic transformation which Jordan is leading aims at empowering them and giving them the chance to drive Jordan’s future growth.

International Affairs Your chance to question Ministry of Defence medals…
0
✖