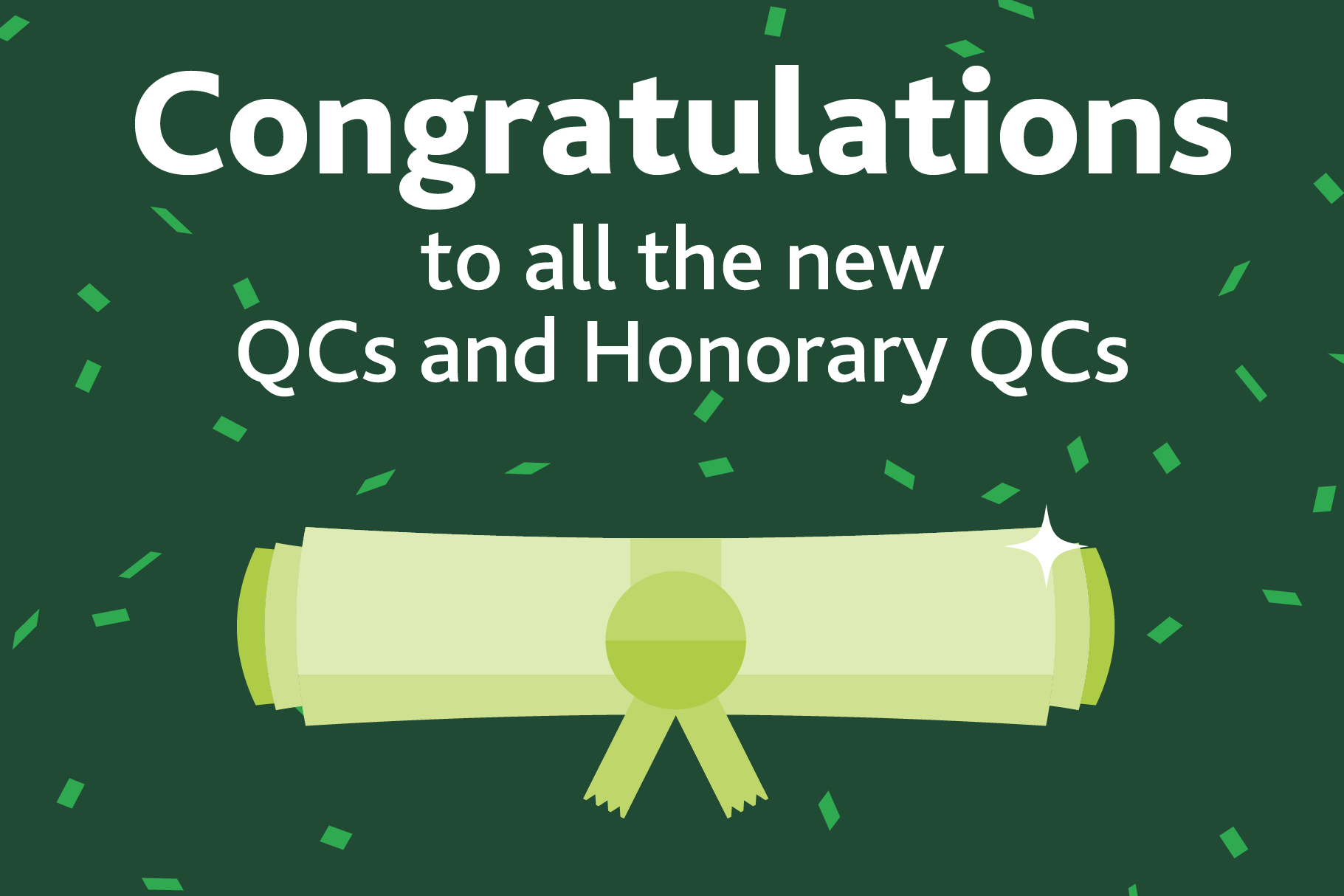 Her Majesty The Queen has approved the appointment of 116 barristers and solicitors as new Queen’s Counsel (QC) in England and Wales. The title of QC is awarded to those who have demonstrated particular skill and expertise in the conduct of advocacy.

Her Majesty has also approved the appointment of 6 new Honorary Queen’s Counsel (QC Honoris Causa). Their biographies are set out below. The title of Honorary QC is awarded to those who have made a major contribution to the law of England and Wales, outside practice in the courts.

The award of QC is a tremendous achievement, made even more impressive against the additional challenges we have all faced this year.

I want to congratulate all those on their forthcoming appointments and awards. The depth of expertise and eminence of these appointees is immense and is testament to the exceptional talent throughout our legal system.

Jenny Beck is a well-known family solicitor who has been at the forefront of access to justice work for the last two decades.  She is the private law representative on the Family Justice Council, sits on the Law Society’s Access to Justice and Family Law Committee and co-chairs the Legal Aid Practitioners Group. Jenny co-founded Beck Fitzgerald to widen access to legal services and is heavily involved in campaigning and negotiating reform.  Her work has supported the protection and improvement of the legal aid system and her practical suggestions for reform have led to meaningful change so that those most marginalised can secure legal representation. She regularly writes articles and appears on radio and television. Her work has contributed to improving the law and practice for victims of domestic abuse including the development of the Domestic Abuse Bill. Jenny has a long history of working collaboratively with stakeholders to effect positive change in law and practice. She is committed to the voluntary sector contributing as a trustee and advisor to a number of charities.

Alan Dignam is a legal academic and Professor of Law at Queen Mary University of London. He is one of the UK’s leading corporate law academics and was part of the original academic team that set up the Queen Mary Legal Advice Centre (QMLAC) to provide pro-bono advice to the local community. As Chair of the QMLAC, he has had an impact on many clients, students and lawyers. Over 3000 clients have been assisted by nearly 2000 students at the QMLAC since 2006 along with hundreds of lawyers. Alan also set up the Queen Mary Law School Liaison Programme which works with over 55 schools in the East of London to engage young students with the law. He provides interactive university level lectures and workshops to schools and provides advice to teachers helping students from diverse backgrounds to apply to study law at university. His impact from his school liaison role has brought him to work with other important community engagement schemes such as the Judicial diversity and community programme and the Home Office, London Mayor and Redbridge Council Future Leaders scheme, to provide year 12 students from diverse backgrounds and schools with access to university level law lectures and experiences to help them develop into future leaders.

Christopher Forsyth is a legal academic and Emeritus Sir David Williams Professor of Public Law in the University of Cambridge. He specialises in Public Law and Private International law as well as other aspects of legal theory, comparative legal studies, and judicial history. He has contributed to juristic reflection on the constitutional foundations of judicial review, and to wider public discussion about judicial review and constitutional fundamentals, giving evidence to several parliamentary inquiries on a range of constitutional topics. His analysis of the law of judicial review has been influential and has been routinely relied upon by both Counsel and judges. Christopher’s academic work has contributed to the question of how to square the sovereignty of Parliament with the judges’ power on judicial review of administrative action. It has also emphasised the justified priority of doctrine and principle in judicial reasoning.

Conor Gearty is a legal academic, Professor of Human Rights Law at London School of Economics and Political Science, and barrister. He is a Fellow of the British Academy (where he is presently Vice-President for Social Sciences), a member of the Royal Irish Academy, a Bencher of the Middle Temple, and an Honorary Bencher of King’s Inns, Dublin. His publications have been influential in the development of the law in the field of civil liberties, human rights and terrorism. It has been particularly through his analysis in his publications, including consideration of the historical context before the Human Rights Act and the development of the UK’s jurisprudence through case law since 2002, that he has supported the development of the law in this field. He was invited by the then Judicial Studies Board (now the Judicial College) to train judges for the implementation of the Human Rights Act. His various publications have received multiple positive reviews for shaping the direction of human rights law in the UK.

Angela Jackman is a Solicitor and Partner at Simpson Millar law firm and is a Senior Lecturer in Law at City, University of London. She specialises in Mental Capacity, Education and Public Law. The focus of her work has been in promoting the legal rights of vulnerable or disadvantaged adults and children. She is an expert in education law, which is demonstrated through her practitioners’ text “Practical Education Law”, published by the Law Society in 2005. She also has a particular interest in promoting and securing the legal rights of minorities. Angela shares her knowledge via training and updates on education law in the Legal Action Group’s magazine Legal Action. She frequently speaks at public events and delivers training to practitioners. Angela regularly informs government law and policy with expert responses to consultations. She is a member of the Law Society’s Human Rights Committee and is an expert panel member of the Strategic Legal Fund for Vulnerable Young Migrants.

Rachael Mulheron is a legal academic and Professor of Tort Law and Civil Justice at Queen Mary University of London, and is currently, in a voluntary and pro bono capacity, monitoring the Disclosure Pilot in the Business and Property Courts. From 2009 to 2018, Rachael was a member of the Civil Justice Council and helped to draft the Code of Conduct for Litigation Funders. Rachael has chaired working groups and has led reports on diverse subjects including the regulation of third party litigation funders, the reform of damages-based agreements, the way forward for ‘before the event’ legal expenses insurance, the giving of expert evidence concurrently, and the implementation of class actions reform in England and Wales. Her work and reports have recommended many reforms in this area of law.