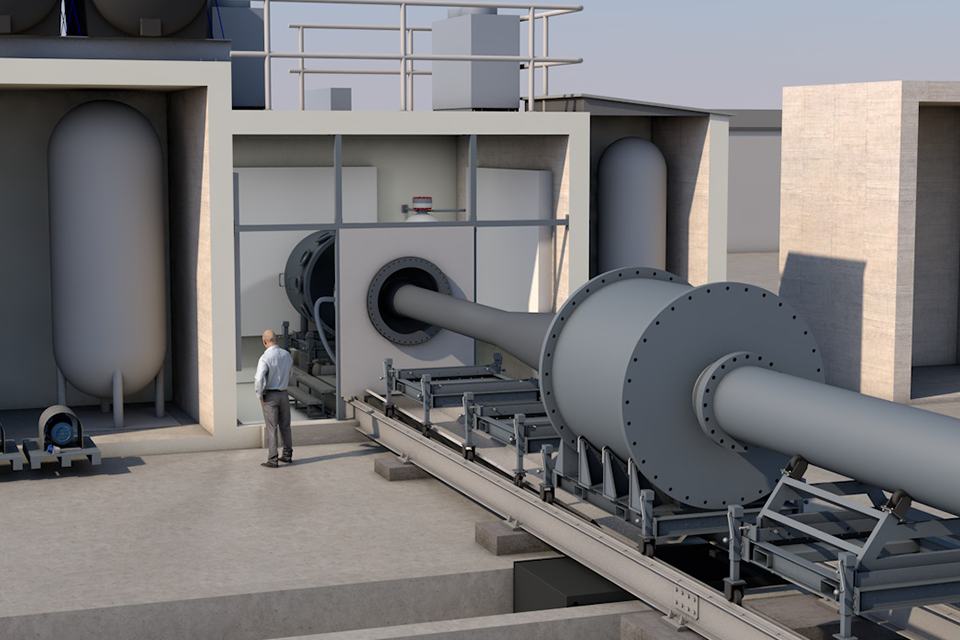 The new centre will allow UK companies and academics to fire up and test state-of-the-art space propulsion engines at up to 1.5kN in high-altitude vacuum, an equivalent test altitude of 140,000ft. It will cement the international reputation of the Westcott Space Cluster – where the site will be based – in propulsion.

Based in Aylesbury Vale Enterprise Zone, the facility, which is expected to create around 60 jobs, is due for completion in early 2021 and will offer companies a more affordable test facility than international rivals. It will also allow new types of more sustainable propellants to be tested, such as Hydrogen Peroxide and Liquid Oxygen which are more environmentally friendly in sourcing, storage and combustion.

At present, companies can test extremely small engines in the UK but have to go overseas to test bigger engines. The new facility will tackle this issue and help grow the UK’s status as a leading space player, giving industry resources that allow us to grow our technological edge.

Designed to support the growth of brand-new space technologies, the government is backing the new facility, dubbed the National Space Propulsion Test Facility (NSPTF), to the tune of £4 million in funding.

The UK’s space industry is booming as we invest in our brightest space scientists, the facilities they work in and the technologies they are creating.

Backed by a £4 million government investment, this pioneering UK-based facility will elevate our most ambitious space businesses, enabling them to undertake complex spacecraft engine testing, while boosting the local economy by creating highly skilled jobs.

How does the engine test work?

Crucially, this range of engine testing will allow further innovation for the type of orbit-raising and station-keeping engines this facility will be able to test and it is the first step in a plan to test larger engine types.

The UK Space Agency has worked with the European Space Agency, Science and Technology Facilities Council’s RAL Space and NAMMO UK to develop this cutting-edge facility, and once up and running the site will use game-changing technology to test the propulsion engines that position orbiting spacecraft in conditions similar to those experienced in space.

The new capability of this facility will allow innovation in propulsion technology, as well as the cost-effective development and testing of even more powerful engines for interplanetary travel, and to drive forward the significant commercial telecommunications satellite market.

Nammo UK has been awarded a major contract to install and operate the equipment to be housed within this new facility at Westcott.

Thanks to this key UK government investment, UK space now can compete favourably with the very best rocket test facilities in the world. The Nammo team have designed, created and produced this phenomenal, state-of-the-art hotfire test facility that is already driving further growth in UK based spacecraft propulsion businesses.

We look forward to testing engines for customers from all over the globe and to further key developments that the NSPTF will enable.

This is yet another leap forward for the development of Westcott Venture Park in Buckinghamshire as a centre of excellence in the space propulsion and associated high-tech industries.

Future Investment will ensure Westcott’s place at the heart of the UK space industry. Over the next 10 years, Westcott will become the UK Centre for the next generation of propulsion systems and small satellite manufacture.

The national rocket test facility at Westcott is a key step towards delivering a world-leading hub for the space sector in the heart of Buckinghamshire.

We are delighted to support this new facility in our Enterprise Zone, which opens up the next stage in the evolution of the Westcott site to attract new business and investment to this world-class centre of excellence in space propulsion.

The UK space sector is a huge economic success story, growing by over 60% since 2010. Satellites already support £300 billion of UK economic activity through the use of satellite services and is expected to grow further as this new government support unlocks commercial opportunities.

Westcott is recognised as an integral part of the UK space sector growth strategy with a nucleus of well-established companies supporting rocket and satellite enabled research and development projects.

October saw the opening of the Westcott Innovation Centre, part funded by the Local Growth Fund and Aylesbury Vale Enterprise Zone, via Buckinghamshire LEP, and managed by the Satellite Applications Catapult.

This is the latest phase of the site development, which also now includes a 5G Step-Out Test Facility and Incubation Centre and is planned to include a Disruptive Innovative Space Centre for apprenticeships and further specialist testing sites.

Alongside office space and meeting rooms, the centre provides a fully flexible engineering facility, giving businesses working in space and related sectors the opportunity to use specialist equipment for light mechanical engineering and rapid prototyping activities.