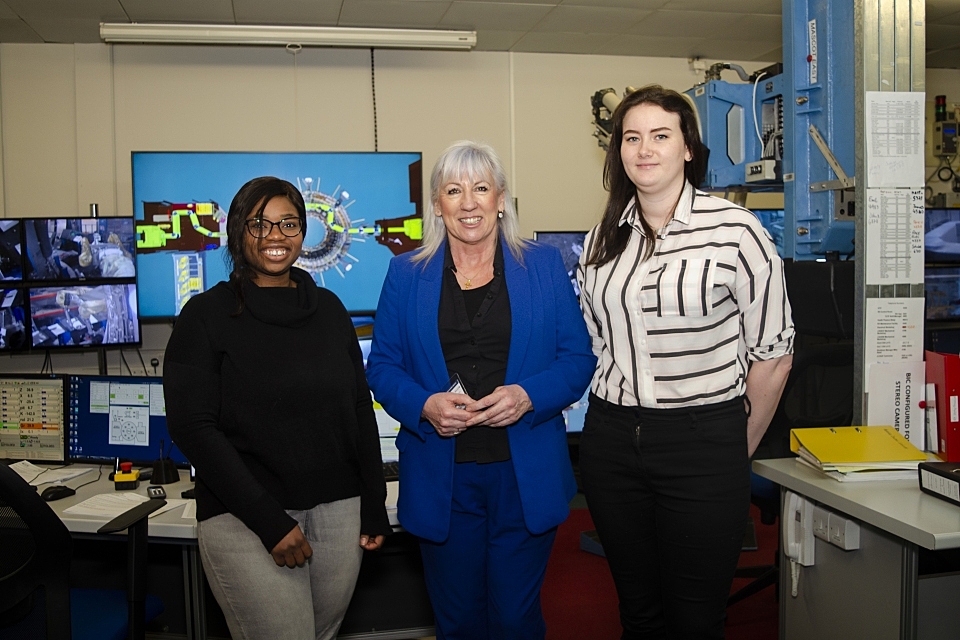 The minister met with UKAEA CEO Ian Chapman before being given a tour of the research facilities.

UKAEA is the UK’s national fusion energy laboratory – aiming to realise the huge potential of nuclear fusion as a way of generating carbon-free electricity in the future. The minister visited UKAEA’s new fusion research device, MAST Upgrade, which is being launched later this year. She also toured the European JET facility – the world’s largest fusion experiment, which UKAEA hosts for scientists around Europe.

The minister then saw some of the spin-off technology being produced by fusion research at Culham. She learnt how UKAEA’s Remote Applications in Challenging Environments (RACE) centre is helping a range of industries to benefit from robotics techniques that were pioneered at JET.

Lastly she had the chance to visit the £12 million Oxfordshire Advanced Skills apprenticeship centre, opened last autumn, and to meet some of the apprentices who are being trained there for local hi-tech and engineering employers.

The minister spoke of her mission to bring science to life and get the public excited about science. To mark International Women’s Day this coming Sunday, she posed for photos with female scientists and engineers from UKAEA during the visit.

UKAEA CEO Ian Chapman said: “It was a great pleasure to show the minister around and discuss our strategy for developing fusion as a sustainable, low-carbon energy source. She had the chance to meet many of our enthusiastic scientists and engineers, and it is clear that she shares their enthusiasm and optimism for UK science and innovation.”

Environment Flood warnings remain in place as heavy rainfall i…
0
✖