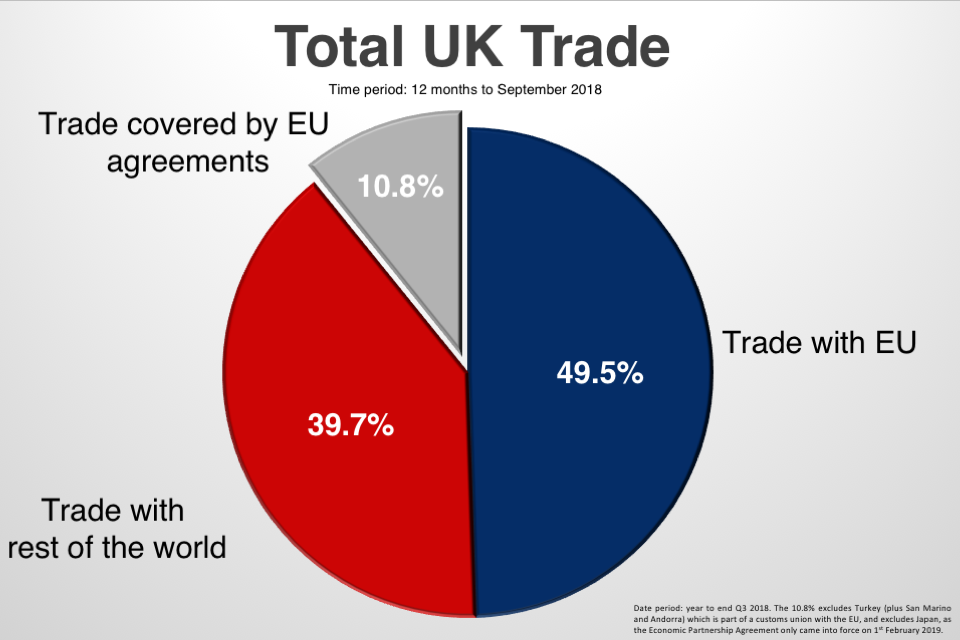 Our priority is to avoid disruption to our global trading relationships as we leave the European Union.

The United Kingdom already trades with countries all over the world and will continue to do so regardless of whether we leave the European Union with a deal or not.

Nearly half of our trade is with the EU and a further 11% of our trade is covered by the existing EU trade agreements we are looking to continue as bilateral deals after we leave the EU: the 20 smallest of these agreements account for just 0.8% of UK trade. The remaining 40% of trade takes place with other countries.

However, it is only responsible for Government to prepare for all eventualities. That’s why the Department for International Trade is continuing to work with countries to transition the existing EU trade agreements which the UK participates in as a member of the EU, in the event of a no deal to avoid disruption for businesses. This is our top priority and we have significantly increased resources transition these agreements.

We have already secured agreements with countries that account for more than a quarter of UK trade covered by these agreements. This includes signing agreements with Switzerland, which is worth over 20% in terms of value of these agreements, as well as Chile, the Faroe Islands, Eastern and Southern Africa, Israel and the Palestinian Authority.

We have also signed Mutual Recognition Agreements with the United States of America, Australia and New Zealand, which ensures that businesses don’t face additional bureaucracy and allows them to continue trading as freely as they do today after we leave the European Union.

Many of the other trade agreements are at an advanced stage, and the UK Government will be signing more in the coming days and weeks.

We will continue to update businesses and they should continue to plan for range of Brexit scenarios, including the possibility of leaving the European Union without an agreement.