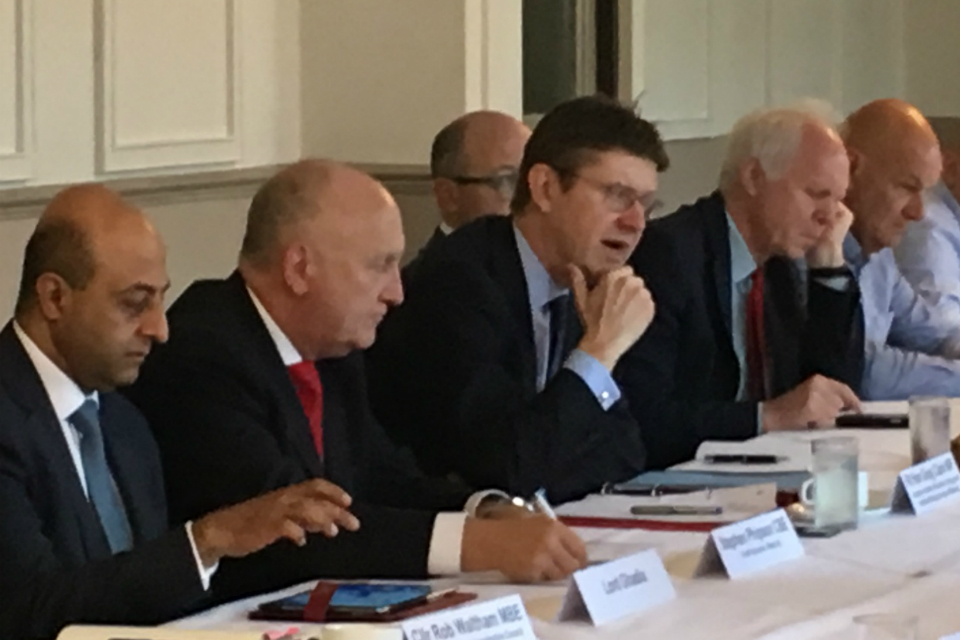 The group reaffirmed its commitment to British Steel, and its ongoing efforts to leave no stone unturned to support the Official Receiver in finding a suitable buyer.

At the meeting, it was also agreed that there would be a sub-group formed of suppliers and customers, led by Stephen Phipson, Chief Executive of Make UK, which will focus on companies in British Steel’s customer and supply chain.

Members of the group praised the commitment of British Steel’s workforce who continue to reach record levels of steel production, despite the challenging time that workers currently face.

Following the meeting the Business Secretary, accompanied by Stephen Phipson, Chief Executive of Make UK and Gareth Stace, Director at UK Steel, visited Bridon-Bekaert in Doncaster, a major customer of British Steel to discuss the role British Steel plays as a key supplier. The wire rope producer demonstrated how it takes steel rods produced at British Steel’s Scunthorpe site, which the Business Secretary saw being produced on his recent visit to the site’s Rod Mill, and turns them into specialist wire ropes, used the world over.

Having worked with British Steel, and visited and met with management and staff at Scunthorpe, Skinningrove and on Teesside, I wanted to convene the British Steel Support Group to harness the passion and experience of everyone in the group to help secure the future of steelmaking at these sites.

Our first priority is to continue to support the Official Receiver through the sale process as he aims to find a suitable buyer for the company, and to safeguard jobs. We have agreed to meet on a regular basis as part of that endeavour.

We also send our thanks and appreciation to British Steel’s highly skilled and talented workforce who, despite facing an understandably worrying time, have continued to lead the company to record levels of steel production – testament to their commitment and hard work.

The world will always need steel and British Steel is amongst the best in the world; this was clearly demonstrated in my visit to Bridon Bekaert, where British Steel is used to manufacture the highest quality product which is then exported across the world.

Our support group brings together representatives from the company and wider industry, trade unions and local leaders, and each and every one of us is steadfast in our commitment to seeing steel production continue well into the future.

Members of the British Steel Support Group are:

Business A New Champion for Mobile and Broadband Customers…
0
✖