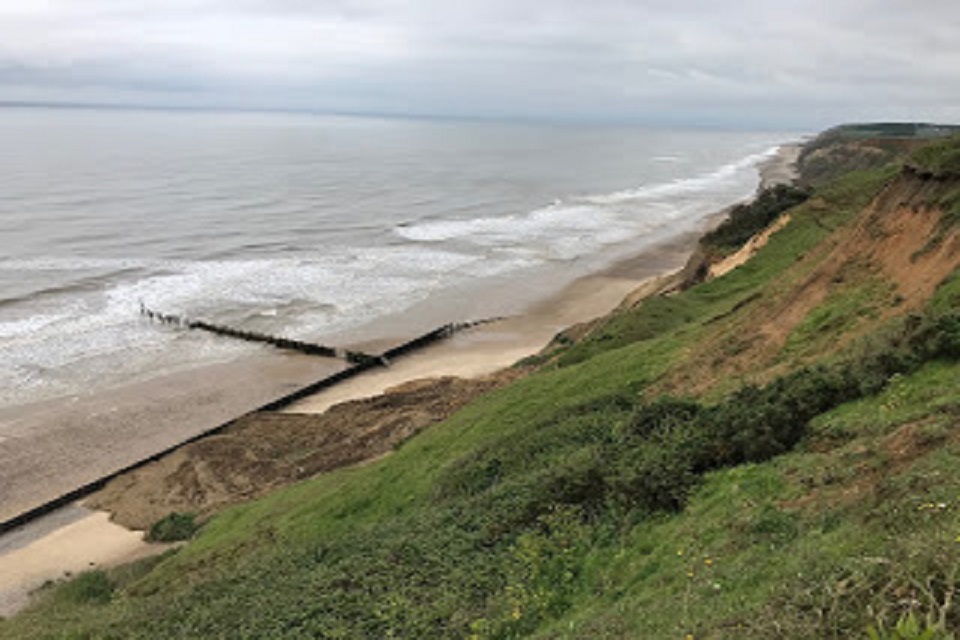 Cromer and Sheringham coastguard rescue teams were on scene on 12 June 2019 and have advised that the cliff fall will cause an impasse at high water so where walkers were once able to get through, they cannot now.

They also re-iterated HM Coastguard’s general cliff safety advice as it’s likely that other cliff falls may be possible around the UK after the recent intense rainfall.

‘We want people to enjoy themselves on the coast by making sure their visit is one to remember and not one they’d rather forget. It’s a well-known fact that the cliffs along the UK coastline are continually eroding, with pieces falling from them that can be just a few small rocks or as large as a car. It’s impossible to predict when the next piece might fall or how big it will be. Periods of intense rainfall followed by dryer warmer weather will often make cliff edges more vulnerable. We’ve seen a number of cliff collapses around the UK coastline in recent months. It’s very clear that cliffs are very unstable in places and we really can’t stress enough how important it is to keep back from the edge. There is no ‘safe’ place to be. Some of the cracks that have appeared have been several feet away from the edge. Don’t be tempted to go and investigate and don’t risk going to the edge to get a dramatic picture. One of our biggest problems is tackling the ‘selfie culture’ where people take risks to get a dramatic photograph of themselves on a dangerous cliff edge or during a tidal surge – no selfie or photograph is worth risking your life for. Remember to call 999 and ask for the coastguard if you see anyone in difficulty or get into trouble yourself.’

By following these few simple safety tips you can keep yourself out of harm’s way on the coast….

Make sure that you are properly equipped for walking along coastal paths. In particular remember to wear sturdy shoes or boots and check the weather forecast and tidal times before you set out. Carry a fully charged mobile phone, and tell someone where you are going and what time you will be home. Only use the designated paths, take notice of any warning signs and fences in place, be responsible and don’t take any unnecessary risks.

Try and keep your dog on a lead near cliffs. If they pick up the scent of an animal or hear something on the coast below it doesn’t take much for them to follow their nose. Above all, if your dog does fall down a cliff or starts getting swept out to sea, please do not attempt to rescue it yourself. Nine times out of ten your dog will rescue itself and return to shore alive, but tragically some owners do not. Our coastguards are trained in all types of rescue on the coast, including dog rescues.

When standing at the bottom of a cliff, we would always advise people that they shouldn’t stand less than the height of the cliff away. That means that if the cliff is 25 metres high, don’t go closer than 25 metres towards it.