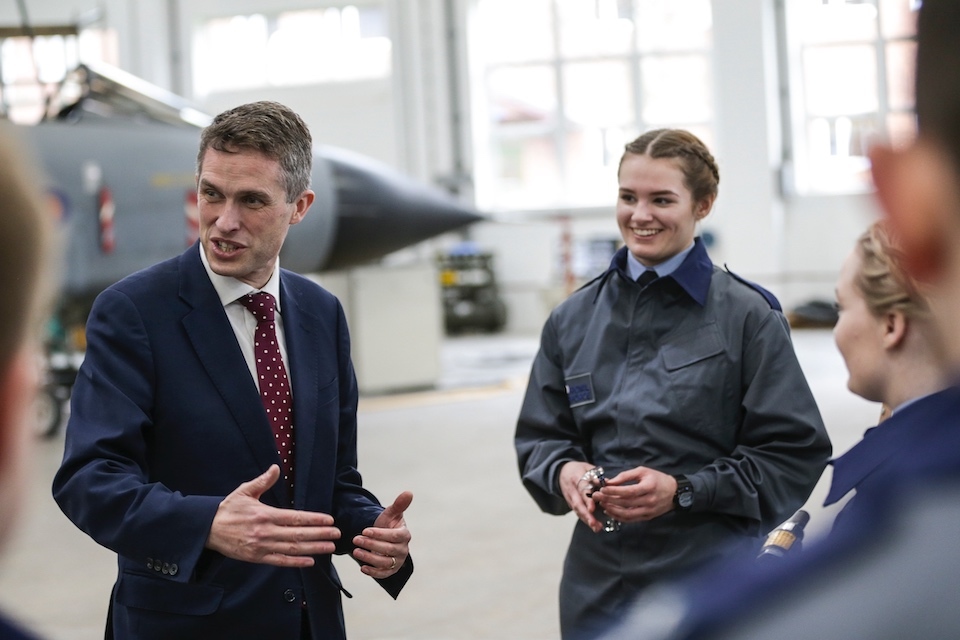 On a visit to the Defence College of Technical Training in RAF Cosford, Defence Secretary Gavin Williamson and Air Marshal Sue Gray met with some of the 45 female apprentices currently studying STEM trades at the college.

Some nine trades were represented, ranging from aircraft engineering to cyberspace communications, survival equipment, photography and the emergency services, showcasing the breadth of skills of apprentices in the Armed Forces.

From those completing apprenticeships at the start of their careers, to the first female three-star officer, I am delighted to celebrate both National Apprenticeship Week and International Women’s Day with the young men and women who will mark the future success of the UK Armed Forces.

I hope that the young apprentices we met today are inspired by Air Marshal Sue Gray’s historic achievement to reach for the top. With all roles across the British military now opened to women, there are no limits to those looking to succeed in Defence.

Last year all combat roles in the UK Armed Forces were opened to women for the first time, including those in ground close combat and the Royal Marines.

This event demonstrates the breadth of professions that women are already working in within the Armed Forces. As of 2018, a total of over 20,000 women are currently serving in the Regular and Reserve forces.

AM Sue Gray was last month promoted to the rank of Air Marshal, becoming the RAF’s first ever female three star officer and the most senior woman to have ever served in the UK Armed Forces.

She will shortly take up the role of Director General of the Defence Safety Authority, responsible for the regulation of Health, Safety and Environmental Protection across the Ministry of Defence.

While visiting Cosford, the Defence Secretary also met with a number of women completing apprenticeships in the RAF, including 20-year-old firefighter Cerys Hopkins. Cerys, from Pontypridd in South Wales joined the RAF 12 months ago and is stationed at RAF Benson in Oxfordshire. She said:

I have always wanted to be that person who people look to in times of crisis and emergency, someone they can rely on. Being a firefighter and being in the RAF really gives me that.

International Affairs Women peacebuilders tell their stories to mark In…
0
✖