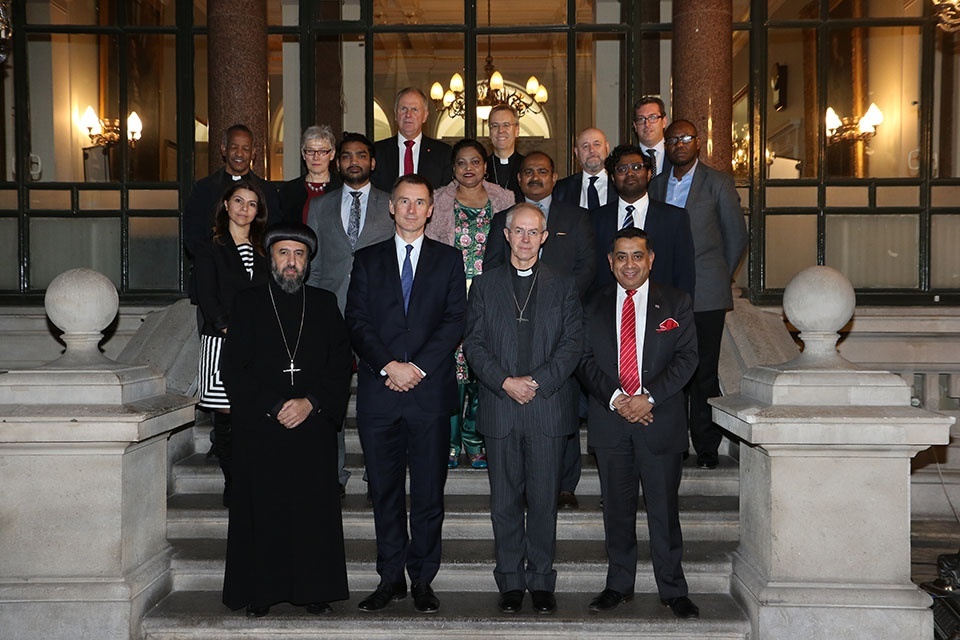 Yesterday my family and I walked a short journey to our local church, and enjoyed an uplifting Christmas service. We attend as a simple matter of personal choice, but since being appointed Foreign Secretary, it has struck me how much we take that choice for granted: others around the world are facing death, torture and imprisonment for that very right.

It is distressingly poignant at Christmas to hear recent warnings that the persecution facing Christians across the globe is now most stark in the region of its birth.

A century ago, 20 percent of the people of the Middle East were Christian; today the figure is below 5 percent. It is not hard to see why. On Palm Sunday in 2017, a suicide bomber in Egypt attacked a Christian Cathedral that has existed since the inception of Christianity, brutally killing 17 of the congregation. This is an extreme example, but it is by no means isolated. Last week, I met an Iraqi doctor who told me how patients had threatened her and her family with beheading when they heard she was a Christian who refused to convert. Step by agonising step, we are witnessing the erosion of Christianity as a living religion in its heartland.

Elsewhere, the situation is also deeply perilous. Across the world, about 215 million Christians suffer persecution, according to the campaign group, Open Doors. The International Society for Human Rights has found that Christians are the victims of 80 percent of all acts of religious discrimination. Like the Christian family I met recently who were accused of blasphemy in Pakistan; they told me how extremists targeted them, attacked their young sons by ripping school uniforms off their bodies, and shot at the mother. There were striking parallels with the case of Asia Bibi – a Christian Pakistani woman who was beaten, imprisoned, and despite being acquitted still lives under constant guard because of the threat of mob justice – whose plight has moved the hearts of the British public.

Britain has long championed international religious freedom, and the Prime Minister underlined our global leadership on this issue when she appointed my excellent colleague Lord Ahmad as her Special Envoy for Freedom of Religion or Belief. So often the persecution of Christians is a telling early warning sign of the persecution of every minority.

But I am not convinced that our response to the threats facing this particular group has always matched the scale of the problem, nor taken account of the hard evidence that Christians often endure a disproportionate burden of persecution. Perhaps this is borne out of the very British sense of awkwardness at ‘doing God’. Perhaps it’s an awareness of our colonial history, or because Britain is a traditionally Christian country some are fearful of being seen to help Christians in desperate need.

Whatever the cause, we must never allow a misguided political correctness to inhibit our response to the persecution of any religious community.

So I have asked the Rev’d Philip Mounstephen, Bishop of Truro, to lead an independent review of whether we are doing all we can. I would like this exercise to consider some tough questions and offer ambitious policy recommendations: Britain has – in my view – the best diplomatic network in the world, so how can we use that to encourage countries to provide proper security for minority groups under threat? Have we been generous enough in offering practical assistance, and does the level of UK support match the scale of the suffering? Have we always got our foreign policy priorities right in terms of advocating for and expressing solidarity with this group?

I am far from the most eloquent person to speak out about this problem – from Prince Charles, to the Archbishop of Canterbury, to parliamentarians across the political spectrum, we have been warned many times – but with Christianity on the verge of extinction in its birthplace, it is time for concerted action that begins to turn the tide. I have asked Bishop Mounstephen to report back to me by Easter.

Britain has a strong history of standing up for the rights of all religious communities. I am proud of the way the UK has led the world in condemnation of the ethnic cleansing of the Muslim Rohingya community in Burma; as well as our response of passionate anger to the recent resurgence of anti-Semitism in our own society.

It is not in our national character to turn a blind eye to suffering. All religious minorities must be protected and the evidence demonstrates that in some countries, Christians face the greatest risk.

We should be willing to state that simple fact – and adjust our policies accordingly.

The Apostle Paul foretold of the suffering that Christians would face through the ages, but still saw reason to hope: ‘We are afflicted in every way, but not crushed; perplexed, but not driven to despair; persecuted, but not forsaken; struck down, but not destroyed.’

It is time to echo that message of hope to the persecuted church around the world; with our deeds as well as our words.