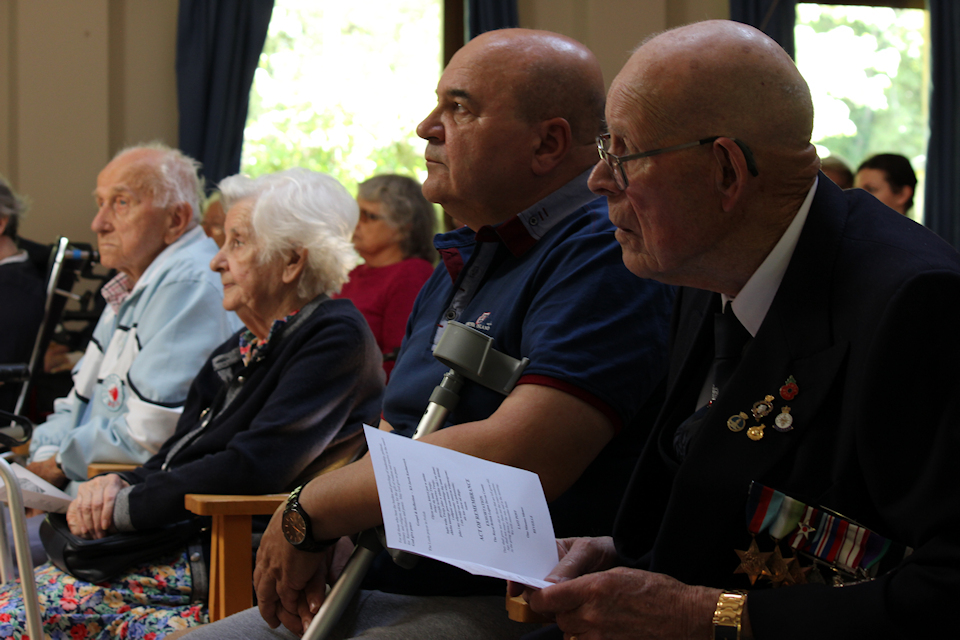 As the sun shone down on the Ilford Park Polish Home in Devon, residents made their way from the church service remembering those who bravely fought and lost their lives during the Battle of Monte Cassino. The memorial service marked the 75th anniversary of a battle that saw an estimated 48,000 Polish soldiers fighting as part of the Allied assault during the final stages between 17 January and 18 May 1944 on Italian soil during World War II.

The service, organised by the MOD’s Veterans UK, part of Defence Business Services, and The Royal British Legion, was held on Tuesday 14 May 2019 and was conducted by Father Jarek Kucharczyk in the Ilford Park Church situated within the home.

Veterans UK continues to deliver 24 hour care on behalf of the MOD and are honoured to help commemorate such a pivotal battle for the residents living at their home.

Three Polish residents who fought in the battle, Mr Zenon Slomka (96), Mr Waclaw Domagala (95) and Mr Jan Grzesik (93), attended the service alongside other Polish residents and their families.

It is important that we remember all those who lost their lives in the battle and throughout the war.

It was an excellent service.

Clare Thomas, Manager at Ilford Park Polish Home and who is responsible for its day-to-day running, said:

We are privileged to have three veterans who live here who are decorated with the Medal of Monte Cassino and three widows as well. It is right and proper that we have a service to commemorate the 75th anniversary.

For those who were unable to return to their homeland, this small part of Devon, fondly known as ‘Little Poland’, provides a sanctuary and is the nearest that this special group of people will get to going home.

With victory secured by the Allies on 18 May 1944, the Battle of Monte Cassino, one of the toughest and bloodiest battles of World War II, takes a special place in Polish history. In April 1944, the 2nd Polish Corps in Italy numbered around 48,000 soldiers and was part of the British 8th Army.

Winning key German defensive positions and breaking the Hitler Line opened the way to Rome, which was taken over by the U.S. 5th Army on 4 June. The 2nd Polish Corps paid a very high price for its victory: 923 dead, 2,931 injured and 345 missing in action (of whom 251 were found). Considering the many battles fought around Cassino and including all the missing, wounded and captured, the battle lasting half a year claimed 200,000 casualties on both sides.

Ilford Park Polish Home provides residential and nursing care to former members of the Polish Forces under British command in World War II, and who were displaced from Poland following the war, or their spouses. The Home meets a wartime UK government promise made by Winston Churchill. It is the responsibility of the MOD’s Veterans UK to continue the promise of the former Prime Minister.

Veterans UK works hard to deliver services for all our veterans and we are proud of our efforts here in Devon to deliver Winston Churchill’s war time promise to the Polish people.

I’m pleased that today’s service has given our Polish residents the opportunity to celebrate their unique identity whilst also commemorating all those who gave their lives in this most pivotal and hard-fought battle of World War II.

Since it was opened in December 1992, the premises currently provides a home for 98 residents in the 81 bed residential care wing, the 14 bed nursing home and three independent bungalows. It is subject to unscheduled routine inspections and meets the standards required by the Care Quality Commission.