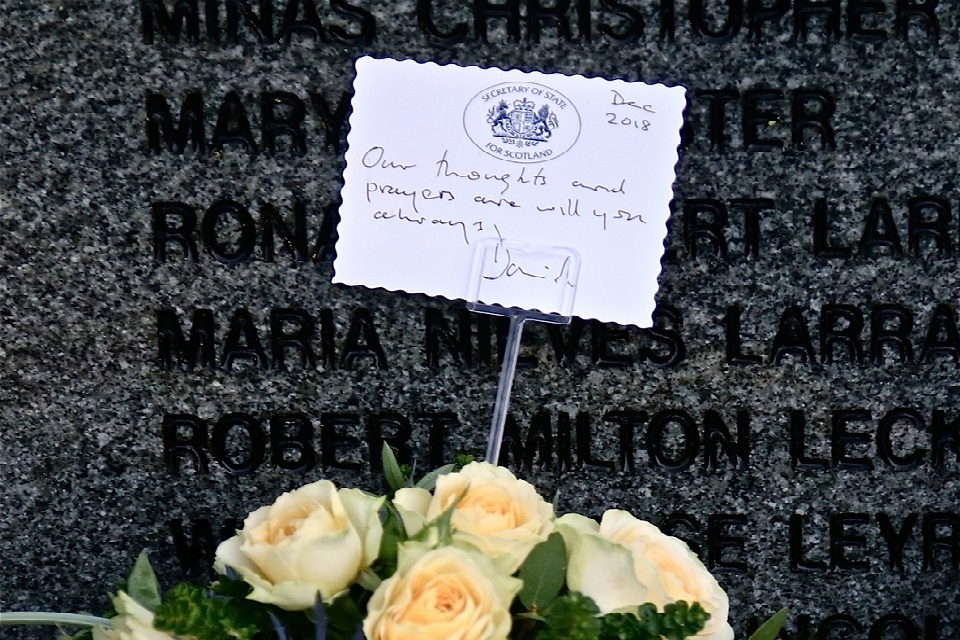 On 21 December, Scottish Secretary David Mundell joined members of the Lockerbie community to lay a wreath in the memorial garden in the the town’s Dryfesdale Cemetery.

The simple and low key ceremony was an opportunity for townspeople to mark quietly the 30th anniversary of the bombing of Pan Am 103. Jeff Brown, Moderator of the Presbytery of Annandale And Eskdale, conducted a service which included readings from Psalm 121, John’s and Gospel and St Paul’s message to the Corinthians.

Her Majesty’s Lord Lieutenant for Dumfriesshire, Fiona Armstrong read out a message from the Queen which read “I send my prayers and good wishes to all those who will be marking this solemn anniversary.”

Speaking on the day of the commemoration, Mr Mundell said:

On this 30th anniversary of the bombing of Flight 103 over Lockerbie, my thoughts and prayers are with the family and friends of the 270 men, women and children who perished on that terrible night, and everyone else whose life has been touched by the event.

Lockerbie lost its anonymity that night. We went from a quiet small town to a centre of global attention in a few seconds. That was the scale of the challenge local people have faced, aside from the horrors of the air disaster itself. It has not been easy, nor have we been able to achieve the closure we would have wanted, even after 30 years. However, throughout, the people in Lockerbie have retained their dignity and stoicism, and offered friendship and support to those who lost loved ones.

Mr Brown echoed this when he closed the ceremony with “Forward Lockerbie. Forward in faith, in hope and in love.”