The confirmed displays include appearances by the Red Arrows in Canada and on both the east and west coasts of the United States, with more events expected to be announced in the weeks to come.

I am delighted people all over the US and Canada will be able to see our world-famous Red Arrows in action.

Previous tours have generated huge amounts of investment for the UK, and we hope the team lighting up the skies of two of our closest defence allies will bring more of the same.

The team will fly to North America for the Western Hawk 19 tour this summer, expecting to arrive in Canada on August 8.

During the deployment – which will be the largest to the region in a generation – the Red Arrows will help to support a range of British interests and promote trade and co-operation, as part of the United Kingdom’s prosperity agenda.

As well as displaying at locations and shows across North America, the team will also attend several engagements on the ground, coordinated by the Department for International Trade (DIT) and the UK Government’s GREAT campaign.

The first locations being confirmed for where the Red Arrows will display are: 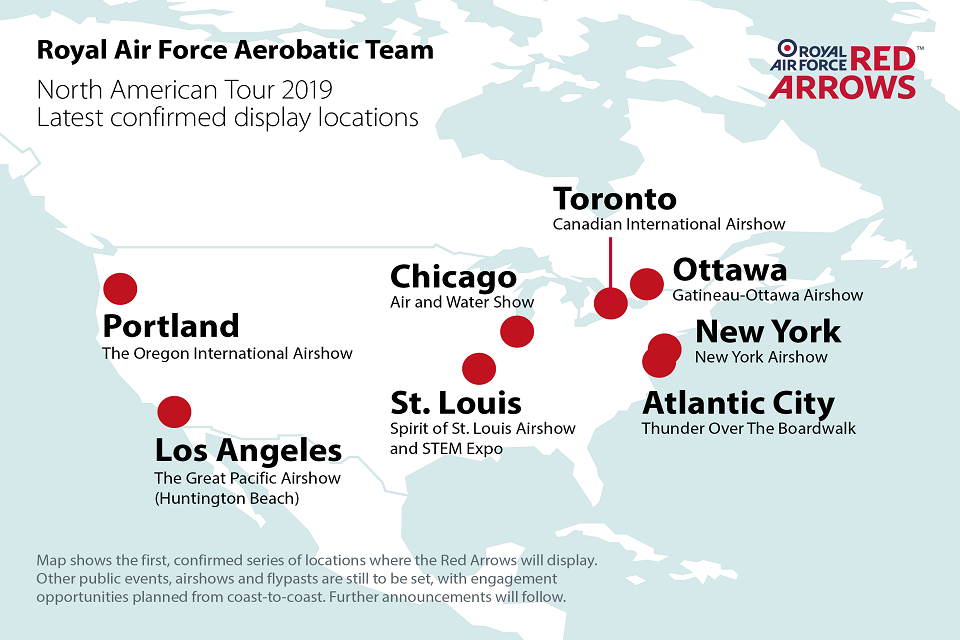 A map showing the locations of where the Red Arrows will be on display.

Other public events, display locations and flypasts are still to be set, with engagement opportunities planned from coast-to-coast. Further announcements will follow as confirmations are made.

The Red Arrows are renowned as one of the world’s premier aerobatic display teams, having performed almost 5,000 times in 57 countries since 1965.

Flying nine BAE Systems Hawk fast-jets, the team showcases the excellence of the Royal Air Force and demonstrates the global reach and capability of the Service, together with representing the best of British at home and overseas.

Previous tours by the Red Arrows, including to the Middle and Far East, have helped generate important investment and sales for the UK across a range of sectors.

The Red Arrows have a rich tradition of working with the GREAT Britain Campaign and DIT to promote trade, investment, tourism and education, all while presenting a positive impression of the UK.

Their tour of North America will provide an invaluable opportunity to deepen the partnership with some of our closest allies and trading partners.

It will include an integrated programme of trade missions and business engagement, involving both the display team and ground crew, and build on the experience of previous tours to provide even stronger support for our business objectives.

Preparations are already being carried out to create a memorable and visually-exciting display to be enjoyed by people watching throughout the latest deployment.

Confirming this initial group of display locations where we will perform in North America is not just exciting for those people hoping to attend these events – but also for the whole Red Arrows team as well.

Air and ground crews are now hard at work, preparing the display which will be seen by audiences in the UK, US and Canada this summer, while detailed planning is well underway to carefully, and safely, plot our overseas tour.

With these airshows announced, we can now join friends and fans alike in visualising what people will be able to enjoy when the Red Arrows make our biggest ever visit to the US and Canada.

However, the air display is only half the story – much of our activity in support of UK interests overseas is centred on considerable ground engagement. As a team, we are particularly enthusiastic about meeting so many individuals, from business leaders and military counterparts to young people and airshow crowds.

After displaying at the Royal International Air Tattoo, between July 19 and July 21, in the UK, the Red Arrows will undertake a short period of maintenance and preparation before departing for North America.

Keep checking the Red Arrows’ social media channels for further details on the North America tour as they are released.