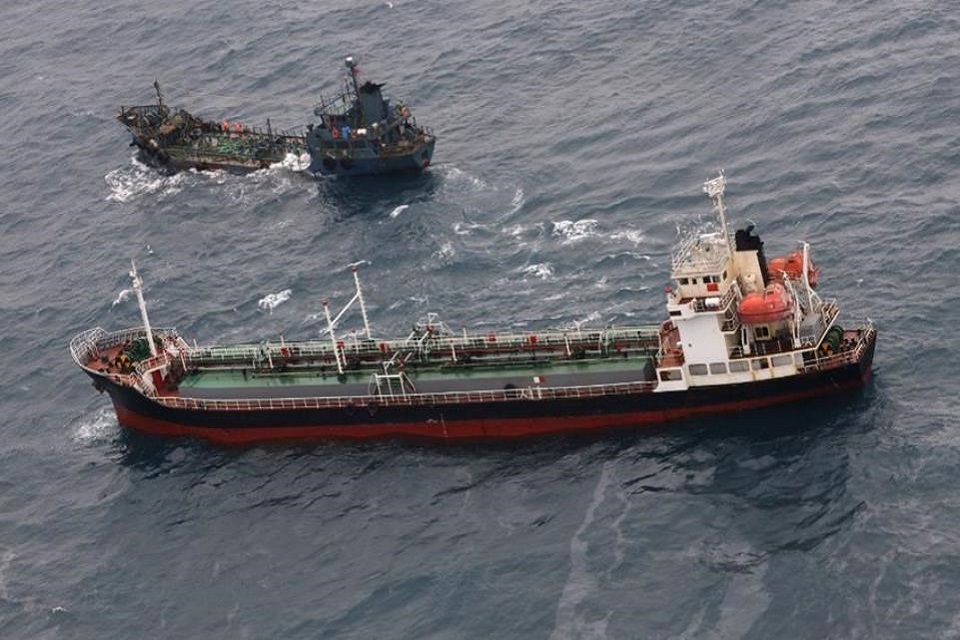 Working alongside Japanese partners, HMS MONTROSE spotted a North Korean ship in the East China Sea, alongside a ship of unknown nationality. It is assessed that the ships were carrying out a ship-to-ship transfer, which is prohibited by United Nations sanctions.

The team on board HMS MONTROSE gathered photographic evidence of the activity and this information has now been reported to the United Nations.

Our Royal Navy presence in East Asia over the last year has been a robust deterrent against those trying to evade international sanctions on North Korea. Sanctions evasion helps facilitate North Korea’s nuclear weapons programme and is a major source of funding.

Sanctions will remain in place. The Royal Navy will keep enforcing them until we see concrete steps towards North Korea’s complete, verifiable and irreversible denuclearisation.

The North Korean-flagged tanker SAEBYOL, which was transmitting as a fishing boat, was spotted alongside a vessel of unknown nationality on the high seas, conducting a prohibited ship-to-ship transfer. The activity was spotted in the early hours of March 2.

HMS Montrose is the fourth vessel to take part in enforcing sanctions against North Korea since the start of last year, after HMS Sutherland, HMS Albion and HMS Argyll deployed in 2018.

These three ships were a deterrent for those seeking to evade sanctions and continue illicit trading with North Korea, and in May HMS Sutherland observed and reported a Panama-flagged vessel conducting a prohibited ship-to-ship transfer with a North Korean-flagged vessel. This resulted in the Panamanian vessel being designated by the UN, deflagged and banned from port entry.

Our work here in East Asia is just part of what the Royal Navy does all over the globe on operations which ultimately help keep Britain safe.

I am proud of my ship’s company for their hard work gathering evidence of this illegal activity. This is a complex process but we were more than up to the task.

The deployment of HMS Montrose to the region to conduct sanctions enforcement was announced during the visit of the Japanese Prime Minister, Shinzo Abe, to the UK, in January.

This joint success during the mission is a highlight of the strong defence relationship between the two nations. HMS MONTROSE has also been conducting joint exercises with Japanese and US partners during her time in the region.