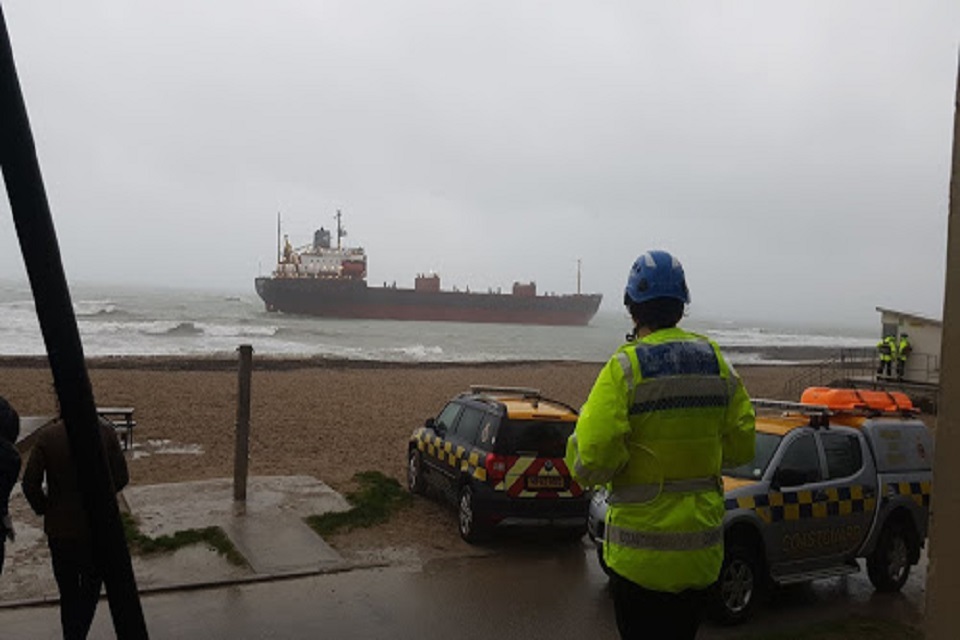 HM Coastguard coordinated assistance to a 180 metre bulk carrier which dragged her anchor and grounded on the western side of the port entrance between Swanpool and Gullyngvase beaches at around 0540 on 18 December. The vessel had 18 Russian crew on board. There was no cargo on board the vessel. She had a list of 5 degrees but there was no report of any pollution.

Tugs arrived and a lifeboat was standing by at the scene. The Falmouth Coastguard Rescue Team cordoned off an area around the ship.

Tugs were attached to the vessel as the tide rose.

The Kuzma Minin has been successfully refloated following a combined effort between five harbour tugs and a salvage vessel.

At around 2.00pm on 18 December the vessel was back afloat and was moving back out into Falmouth Bay under her own power, with the assistance of the tugs. The weather conditions had improved, which assisted the refloat attempt.

Two maritime and coastguard surveyors were on board to carry out an initial assessment of the vessel, before the vessel was brought alongside for a full inspection.

There were no reports of any pollution following the successful refloating of the vessel.

James Instance, maritime operations controller for HM Coastguard said ‘It was great to see an excellently and swiftly coordinated response to this incident. The cooperation of all service involved helped to ensure a successful rescue operation in very demanding conditions.’

Russian carrier ship which ran aground off Cornwall is refloated